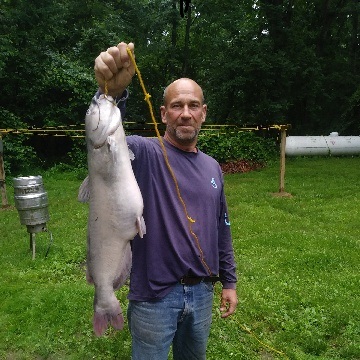 Brian Dvorak, an avid night angler from North East, caught the fish off Turkey Point near the mouth of the Elk River.

“Night fishing is what I do,” Dvorak said. On that evening he brought in a few channel catfish and an American eel, but his last catch of the morning was “something different.”

A Maryland Department of Natural Resources biologist confirmed the species and the fish was weighed on a certified scale at local grocer. Coming in at 9.61 pounds, Dvorak’s catch beat the previous record of 8.27 pounds, set in 2017, by 1.34 pounds.

State biologists confirmed the species as a white catfish by examination of chin barbels and fin ray counts. The white catfish is one of two native catfish species that are found in Maryland’s brackish tidal and fresh waters.

“I can check this off my bucket list,” Dvorak said, adding he considers himself to be a passionate angler who dedicates himself to the sport.

Anglers who think they have a potential record catch should fill-out the state record application and call 443-569-1381 or 410-260-8325. The department suggests the fish be immersed in ice water to preserve its weight until it can be checked, confirmed and certified by staff.