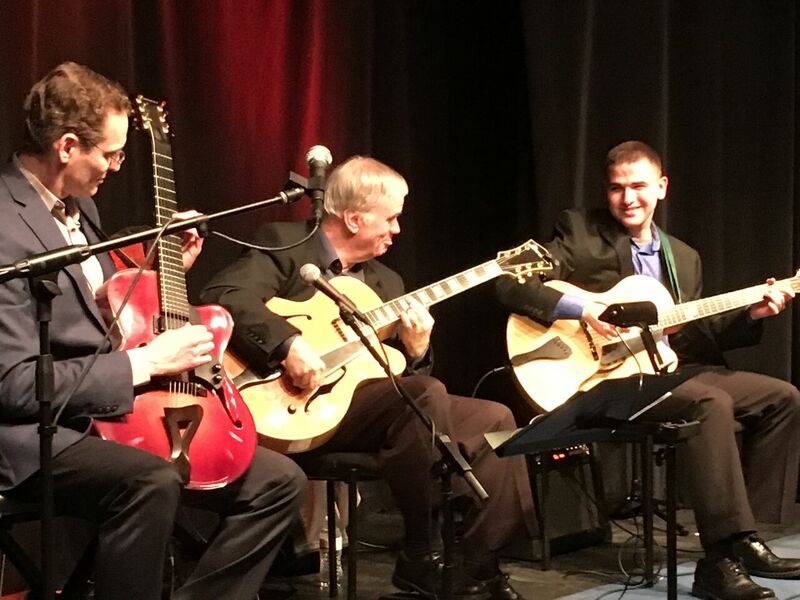 “Steve Herberman exhibits a vast harmonic palette involving uncommon stretches on the fretboard along with a real capacity to burn on fluent single note lines… His sheer command of the instrument puts one in mind of such jazz guitar masters as Joe Pass, Joe Diorio, Lenny Breau, and Gene Bertoncini. His nuanced touch, excellent tone, tasteful, even phrasing and fresh writing style, further elevates Herberman far above the pack of other talented Berklee grads…definitely worth checking out for fans of advanced jazz guitar.” – Bill Milkowski, JazzTimes

Steve Abshire has appeared in concert twice with the “Great Guitars”. Once, back in the 1980’s with Herb Ellis and Charlie Byrd, (filling in for Barney Kessel), and recently with Bucky Pizzarelli and Frank Vignola. A member of various Navy Bands for 24 years, Steve landed the position of guitarist/featured soloist with the Commodores, the U.S. Navy’s premiere jazz ensemble, for 18 of those years until he retired in from the Navy in 1997. He can be found on numerous recordings, including six of his own. In 1987 his first recording, “Big Brass Bed Blues”, received a 4 1/2-star rating from Downbeat Magazine, which called him “…fluent, assured, directly communicative . . . definitely one to watch”.

Jan Knutson has been playing the guitar since 2009. He has studied with Rodney Jones, Peter Bernstein, Steve Abshire, Paul Wingo, Shawn Purcell, Frank Vignola, Frank Latino, and Heather McKay in addition to online lessons with Martin Taylor. In August 2018 after completing two years at the Manhattan School of Music, Jan joined the US Army Band “Pershing’s Own” as a guitarist.