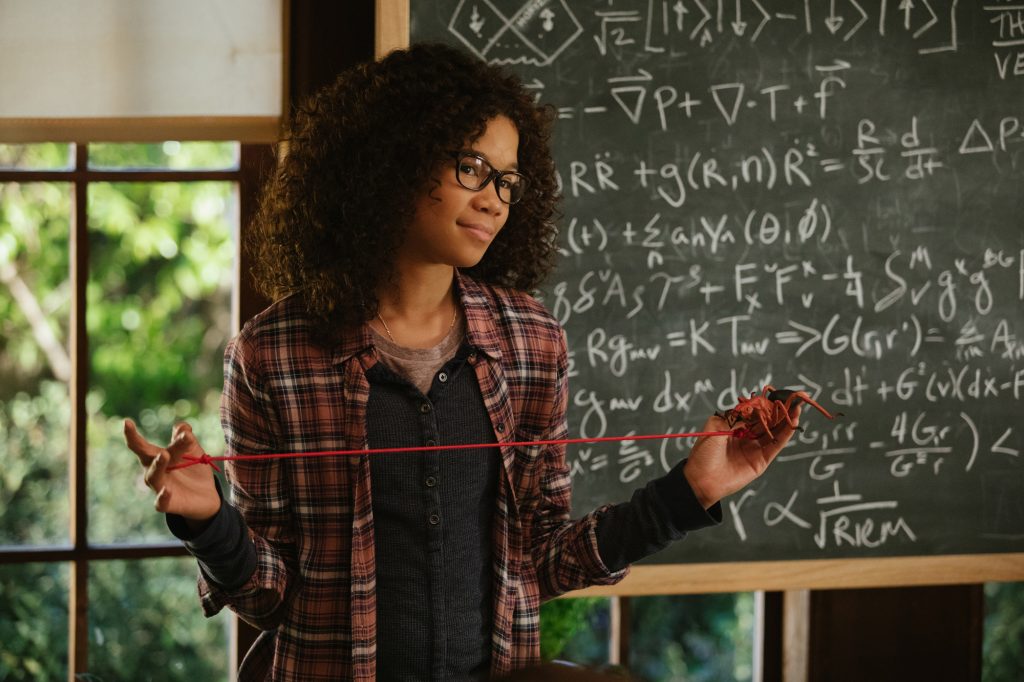 Having not read the book, I can’t compare the 1962 novel by Madeleine L’Engle to this, but there’s a little bit of a conflict of interest here. The main character is one that values science but yet she’s confronted with things and ideas that could be considered magic, which is fine, but that conflict is never really addressed. Magic could just be science we don’t understand, but there’s no reckoning of that here.

Storm Reid (12 Years a Slave and Sleight) stars as Meg Murry, the daughter of a NASA scientist named Alex Murry, played by Chris Pine (Star Trek and Wonder Woman). Meg’s father disappeared four years ago. He’s presumed dead, but in reality he was teleported to another planet or dimension. It’s not clear if Alex teleported himself there on purpose or if it was an accident. The way it’s portrayed on screen is that it’s an accident, but he later apologizes as if he did it intentionally, and that causes confusion about how we’re supposed to feel about Meg’s relationship with her father.

It also causes confusion about whether Alex discovered something truly scientific or if he stumbled upon something magic. When three, magical women appear to Meg to tell her about her father, they seem to confirm that it’s all magic. Given Meg is the daughter of two scientists, it’s sad that she doesn’t question any of this more. She goes along simply because she wants to find her father. Later, when she can replicate what her father did or what happened to him without needing a laboratory or figuring out science equations but merely through “prayer,” she never questions that either or think it a great scientific discovery that should be shared.

Reese Witherspoon (Wild and Walk the Line) co-stars as Mrs. Whatsit. Mindy Kaling (Inside Out and The Office) plays Mrs. Who and Oprah Winfrey (The Color Purple and The Princess and the Frog) also co-stars as Mrs. Which. These three women magically appear to help Meg find her father. The three women can teleport to different planets and dimensions. They also seem to have other abilities. Mrs. Who has special glasses that sees things otherwise invisible. Mrs. Which can grow to be as tall as a house, if not taller, but mainly she’s just Yoda in better and more regal costumes. Mrs. Whatsit can transform into a flying leaf, which seems like it could come in handy but it doesn’t. 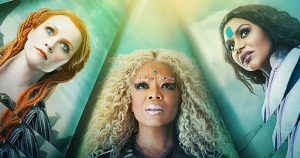 As much as it’s cool to have the three women on screen just standing around looking stunning, the movie would have been better if they weren’t in it at all, at least not in the way they are now. It would have been better if Meg figured out how her father disappeared by recreating his experiment and figured out how to control it by herself instead of being told how by three women who initially do it for her. That way, the movie would have continued to champion the science over the magic.

It’s not to say that movies can’t be about magic and embrace magic, even over science. The idea of a young girl being teleported into a magical place isn’t new. From The Wizard of Oz (1939) to Alice in Wonderland (1951), there are plenty of movies that do a better job of balancing the magic with the reality. This one never finds its footing or its balance in that regard.

The overall threat in this movie is never really defined either. It seems to be a malevolent force that infects people’s souls. It wants to be an analog to the Devil or demonic possession, but there’s no clear distinction with what it can or cannot do and what its plan is. It’s unsure if the evil force was holding Meg’s father hostage and if so, why wouldn’t it infect him or kill him or whatever it does. 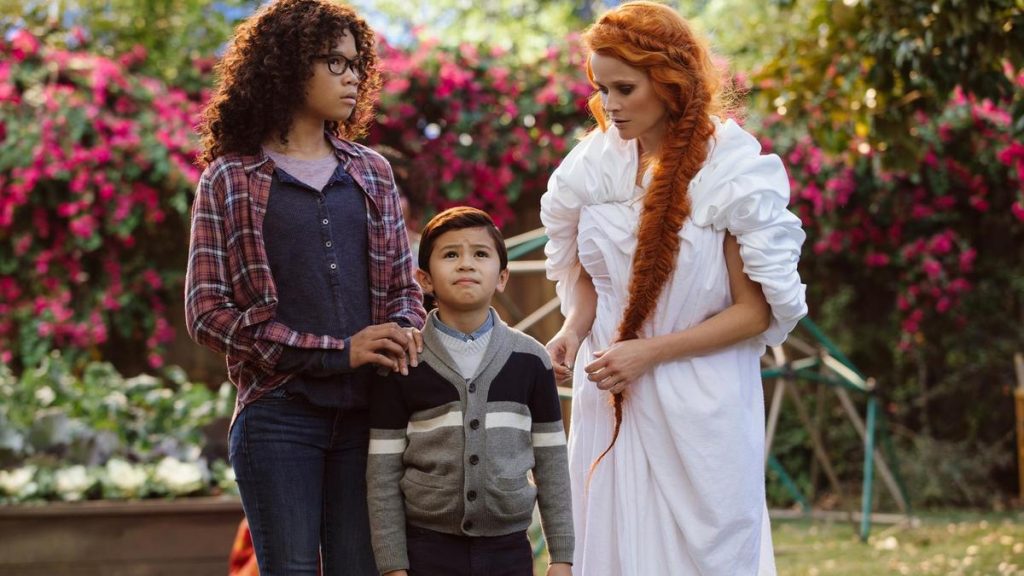 It’s been reported that director Ava DuVernay was inspired by films like The NeverEnding Story (1984), but this movie is less structured. The movie moves from scene to scene with no real strong cohesion. Meg and her companions go from one scene to the next in jarring fashion. We go from set-piece to set-piece like a creepy cul-de-sac in some suburban place or a populated beach and it’s not clear if those environments are illusions or if they signify something. None of the set-pieces are as memorable or emotionally hitting as the Swamp of Sadness or the Ivory Tower in The NeverEnding Story.

This is meant to be an inspirational children’s tale but the story elements and narrative are so slapdash and jarringly put together that it can’t solely be the fault of the screenwriter. Therefore, the emotional impact doesn’t hit as hard at the end as The NeverEnding Story. The performances of Reid and Pine help to sell the emotional impact, but it’s not enough when the story elements and narrative flow are so shaky.

Deric McCabe plays Charles Wallace, the 6-year-old brother of Meg who is very smart, very well-spoken, a future scientist. He’s also adopted. Besides stating that, the movie doesn’t do more to develop that,  but the movie wants to make an issue of it at the end, which is very disjointed and dissociate.

Levi Miller (Pan and Better Watch Out) plays Calvin O’Keefe, the teenage boy who randomly shows up and is there to be a needless tag-along. He’s no more useful than Toto, the dog from The Wizard of Oz. He’s just as cute, but his only function is to be a damsel-in-distress and an example of verbal, child abuse. Calvin’s abuse angle though is so briefly depicted that it loses whatever emotional impact it could have had. Yet, if anything, Calvin’s presence is a distraction. The final showdown is between Meg and Charles Wallace, but so much screen-time is wasted on Calvin that when Meg and Charles Wallace face off, it’s more lame than anything else. 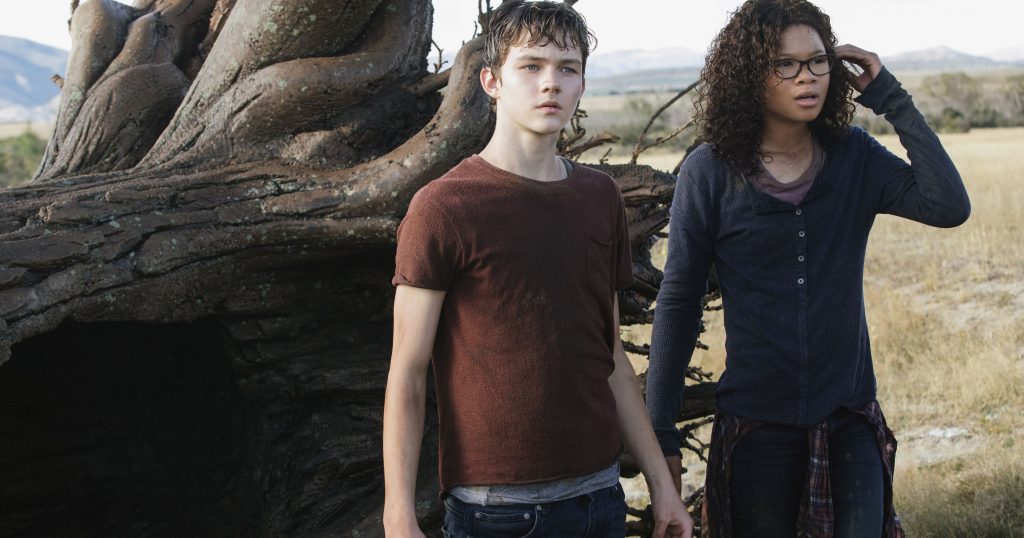 One of the best films of the year so far is Alex Garland’s Annihilation and this movie does share some things with that trippy, sci-fi flick. Garland’s film is about a woman whose loved one disappears in a mysterious, sci-fi phenomenon. Her journey to figure out what happened to him results in her bearing witness to a psychedelic, color and light show. This one is the same thing, except it doesn’t grapple with ideas like Annihilation does. It just emphasizes how special Meg is and reiterates the message of love, literally over and over.

Rated PG for some thematic elements and peril.
Running Time: 1 hr. and 49 mins.