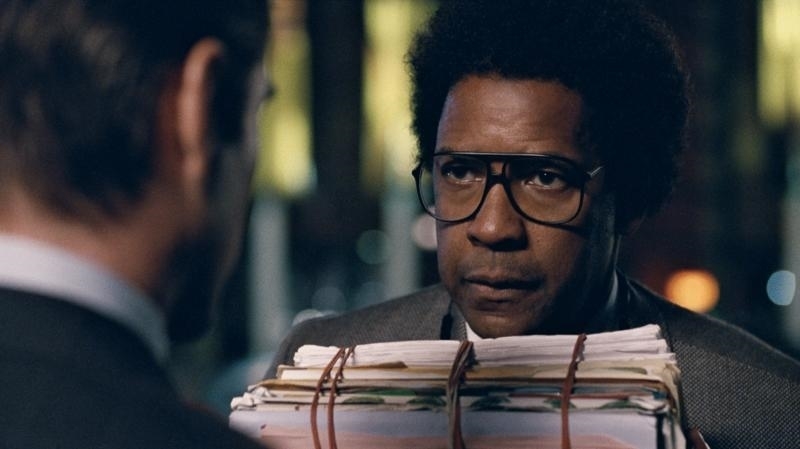 Denzel Washington has played a lawyer before in the Oscar-winning Philadelphia (1993). Washington wasn’t nominated himself for that role. His co-star, Tom Hanks, was. Hanks ultimately won. The music was also recognized but more importantly, the writing was nominated, and it’s the writing that’s mainly the problem here. The writing for this movie isn’t as strong. Washington is a great actor who does a lot with this very limited material, but, that being said, the material is limited. Ron Nyswaner’s script for Philadelphia provided both Washington and Hanks with such range and depth. Not only that, Nyswaner’s script made you care about the lawyer, as well as the law and specifically the case at hand. This film, written and directed by Oscar-nominee Dan Gilroy (Nightcrawler), doesn’t really do the latter or much of the former. As a result, the ending though tragic had me shrugging my shoulders. It certainly didn’t leave me in tears like the ending to Philadelphia.

Washington stars as the titular character, Roman J. Israel, a black man who is probably 60 as Washington is in real-life. He’s a lawyer who is an advocate for civil rights. It’s evidenced not only by the posters of civil rights figures from the 60’s and 70’s in Roman’s apartment but also by his dedication to his cases, even to the detriment of himself. He lives a very meager life. He does have an iPod, but his apartment is small and in a bad part of town. He lives in L.A., but he doesn’t have a car. His diet consists of peanut butter sandwiches and not much else. However, he’s referred to as a savant.

A savant is someone who is extremely smart or prodigious in one area but is lacking mentally in other areas. Savants are presumed to be autistic, and often do exhibit unusual behaviors, both physically and socially. Roman does exhibit autistic-like behaviors. The way he walks and moves is an example. The way he talks to people or rather at them, which might come across as rude or condescending when that doesn’t seem to be his intention!

However, when it comes to the law, Roman is very smart. Mainly, he has an incredible memory, which can recall any statute or precedent at any time. He can also easily and quickly analyze any number of court records on any one. This makes him an excellent researcher, which is basically what he’s been doing for decades, never gaining any court room experience. He most likely has never been to trial. The small law firm where he works has allowed him the freedom to focus on research and clerical duties, while his partner did all the court room stuff.

When his partner has a heart attack and goes into a coma, Roman is left alone. We see he has trouble when he’s then thrust into a court room. He has trouble interacting with clients, prosecutors and judges. His logic and reasoning aren’t wrong, but there is legal decorum and protocol that he doesn’t know, understand, agree with or like, which causes him to hit brick walls. Because his passion for the law and advocacy is so strong, he can hit those brick walls very hard.

One assumes the arc of the movie will be Roman overcoming those walls, navigating the decorum and protocol or mastering them to become a phenom in the court room like a more dramatic My Cousin Vinny (1992). However, Gilroy does the opposite of what he did in his directorial debut. Instead of putting his protagonist in a dangerous situation and watching as that protagonist extracts himself from that situation cleverly, if not sinisterly, Gilroy puts Roman in a dangerous situation and watches as he doesn’t get out of it. Roman tosses his values momentarily and ultimately is punished for it.

It’s a cynical stance where in his debut, Gilroy has an immoral guy succeed in his efforts, but here he has a moral guy fail in his life. It’s not the greatest view that Gilroy is putting on screen. However, being cynical isn’t a criticism in and of itself. What is my criticism of this film and of Gilroy’s debut is how he goes about it and structures the situations around these men. 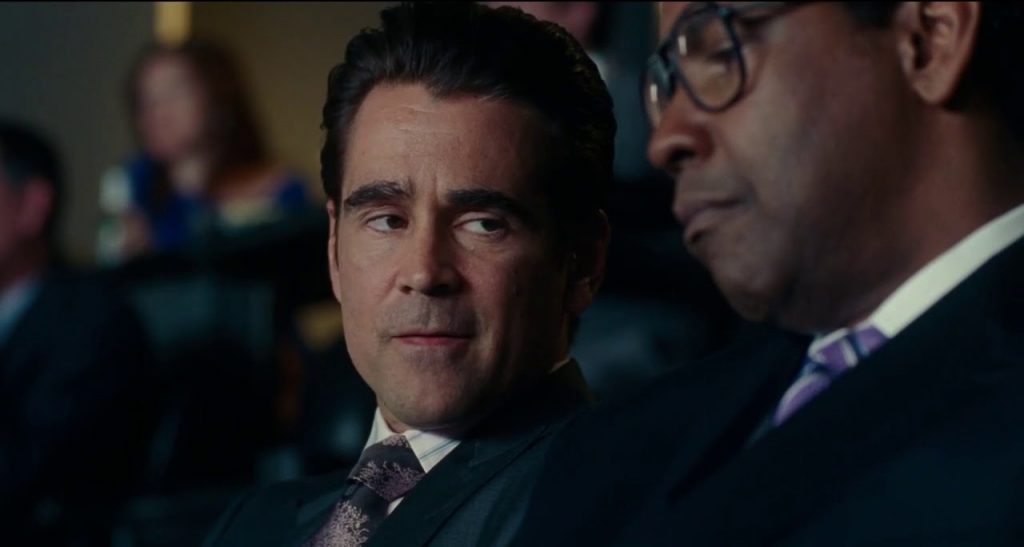 Colin Farrell (The Lobster and Total Recall) co-stars as George Pierce, a lawyer at a rich and powerful firm in Los Angeles. George offers Roman a job and then proceeds to give him a series of criminal cases. Many of which are cases involving young black men, or young men of color. George might come across as a suit who only cares about making money, but he is a good lawyer. Yet, a money-obsessed suit is how Roman sees George, so when Roman hits those brick walls, he decides to imitate and in fact become a money-obsessed suit too.

There are scenes that show Roman hitting those walls, but those scenes aren’t written well enough and not just individually but also collectively. This might also go to Gilroy’s overall direction. When Roman makes the switch to ditch social justice and become money-obsessed, especially in the illegal manner that he chooses, I never bought it or felt why he would do it. Washington is good in the role, so he sells it from a performance standpoint, the frustration and disillusionment that Roman has of the world, but it wasn’t enough.

Yet, even if one suspends disbelief for that, the third act of this film is still a bit of a mess. After Roman does something illegal, which ends up screwing a client, another client who’s in prison discovers it and threatens Roman. This revelation should have happened in the second act. It comes too late in the narrative. It could have given Gilroy more of an opportunity to make this film more of a thriller, or up the paranoia and anxiety. For example, somewhat of a car chase is thrown into that third act that felt totally out of place and not effective.

There’s also no time for Roman to use his knowledge of the law to try to find a way out of his situation, which could get him killed or put in jail. The third act feels rushed. It also would’ve given Amari Cheatom (Night Catches Us) more scenes. Cheatom only has one scene where he plays the client who threatens Washington’s character and Cheatom is great in just that one scene.

Carmen Ejogo (Selma and Fantastic Beasts and Where to Find Them) is also great in her limited screen time. She plays Maya Alston, a woman who works in social justice who becomes impressed with Roman based on not much. The scenes she has with Roman don’t have Roman doing anything super impressive. She at times seems more sorry for him. She also seems taken with his passion for social justice. Ejogo’s performance, again, has to sell things more than the writing, but ultimately I didn’t buy their relationship. 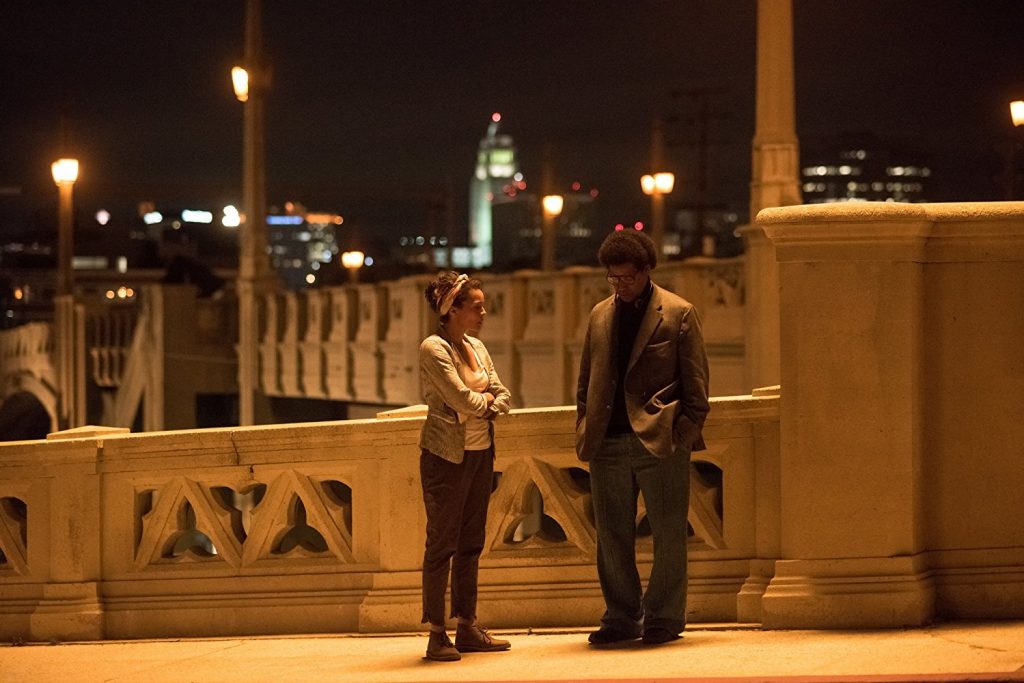 As the film goes along, there’s a briefcase that Roman carries everywhere. What’s sad is that the legal stuff that’s said to be in it is what this movie should’ve been about, that of plea bargain reform. It’s mentioned but not actually explored or examined here. When the movie ends with the contents of that briefcase being pulled out, it’s hollow from an emotional standpoint. Gilroy should have done more to make us care what’s in Roman’s briefcase but he doesn’t.

Finally, when it comes to Washington’s character feeling frustrated and disillusioned about his place in the world and what he’s accomplished or could accomplish, there was a movie a couple of months ago that dealt with this idea better. That film was Brad’s Status. It starred Ben Stiller who isn’t as good an actor as Washington, but that movie moved me more than this one. Cinematically though, this film is a little bit more interesting as Gilroy does show off parts of Los Angeles one doesn’t normally see. 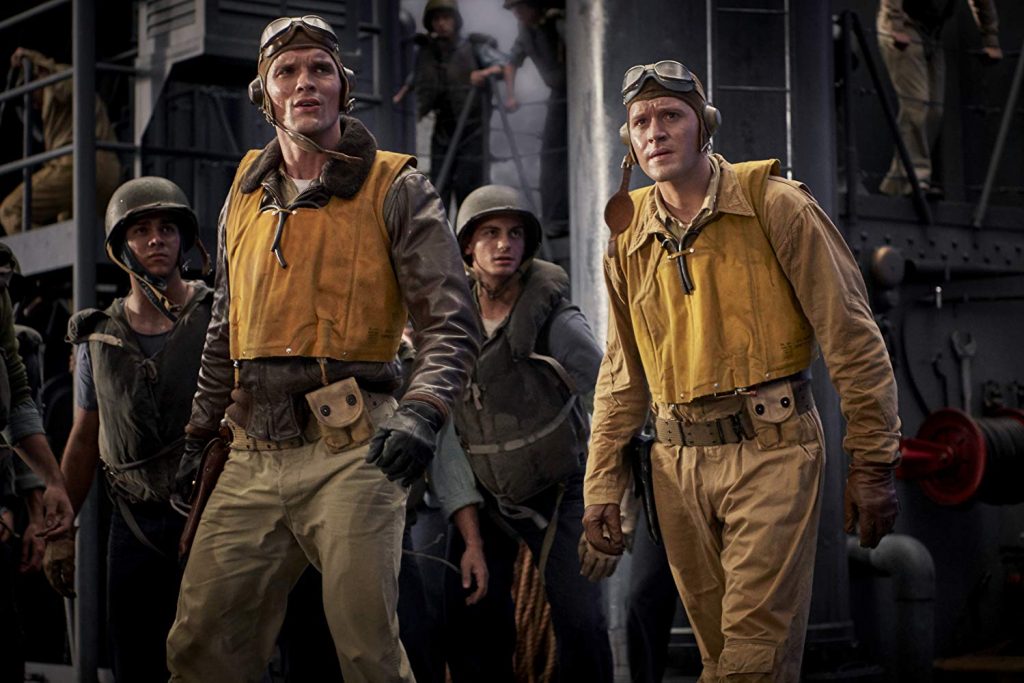 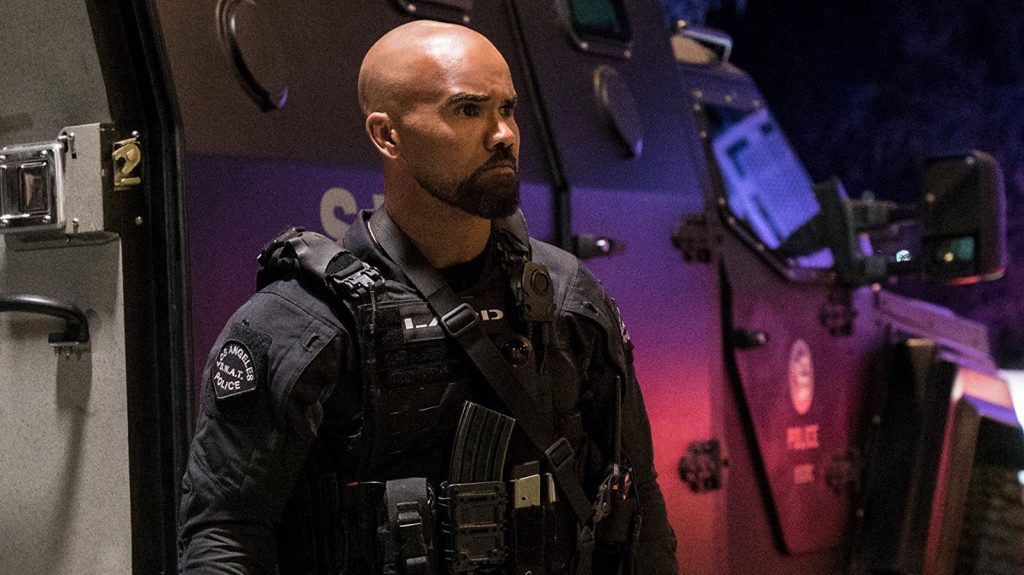 Yet another cop series, but this one started with[...] 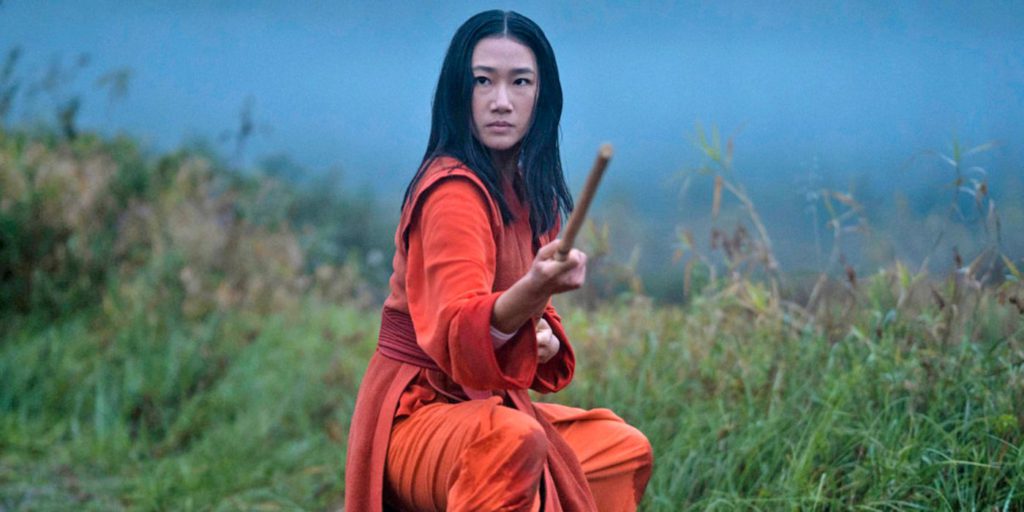