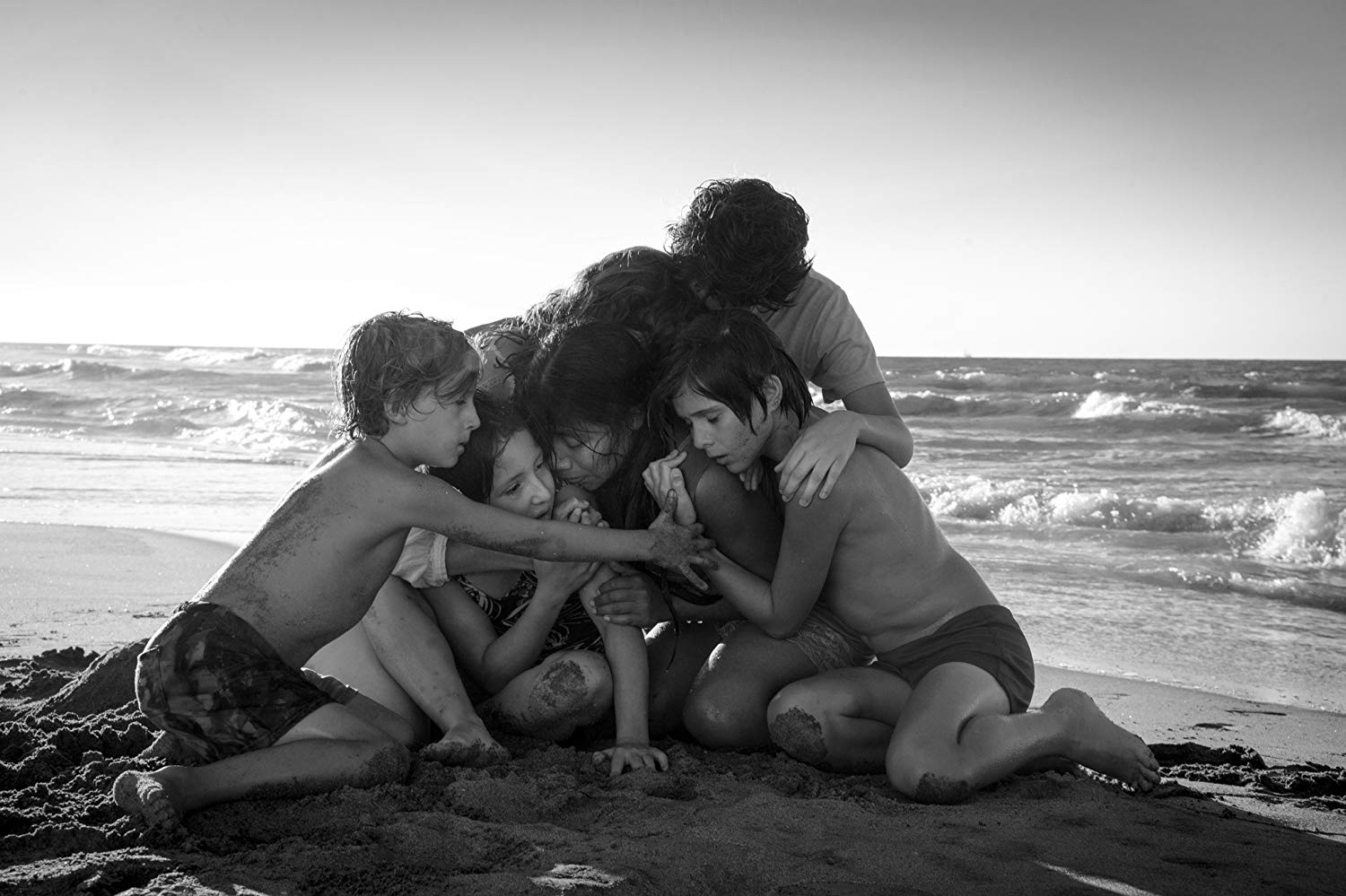 This is the official submission from Mexico to the 91st Academy Awards. It’s been critically acclaimed since it premiered at the 75th Venice International Film Festival where it won the Golden Lion.

According to Metacritic, it’s the highest-rated movie, appearing in the number-one spot of more film critic’s top 10 lists than any other title. It’s also going to be at a lot of award shows, including the Golden Globes. It will more than likely also be up for a lot of prizes at the Oscars. This movie’s creator, Alfonso Cuarón has won two Oscars already. Both wins for his blockbuster, Gravity (2014). He’s been nominated several times before for Children of Men (2006) and Y Tu Mamá También (2002). Most likely, he will be up for Best Director, Best Screenplay, Best Cinematography and probably Best Editing. Most likely, he’ll be up for Best Foreign Language Film but the question is if he’ll be up for Best Picture, which is the ultimate prize. It’s rare for a film in a foreign language that’s from a foreign country to be up for Best Picture. There is precedent, given that Costa-Gavras’ Z (1969), Jan Troell’s The Emigrants (1971) and Michael Haneke’s Amour (2012) have done the same.

The film is in black-and-white and is in fact in two foreign languages. The first is Spanish and the second is Mixtec. Mixtec is the language of the indigenous people of the same name who lived in Mexico prior to that land being conquered and colonized by Spain. Mexico is a combination of European people and so-called Native Americans or native people. Given that this film is about a young Mixtec woman working for a European family as a maid and apparent nanny, it gives you an idea of the power dynamic at work here and the power dynamic that Cuarón is possibly trying to expose.

It reminded me of the late Bernardo Bertolucci’s The Dreamers (2003), which is set against the backdrop of the 1968 Paris student riots. This film doesn’t have the same subject matter, but it is set against the backdrop of similar, political unrest in the 1960’s and 70’s. In fact, Cuarón specifically references the Corpus Christi massacre on June 10, 1971. It was a massacre that sprang from the Student Movement of 1968, which were protests by Mexican students and others due to economic inequality and government repression. While the film references these issues, it never delves into them with much depth. It’s superficial in dealing with those issues. 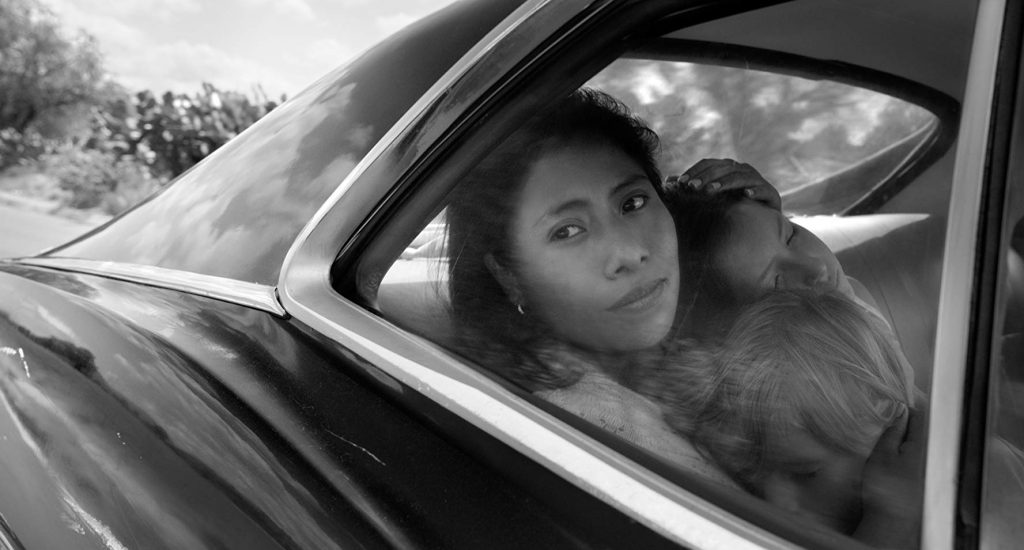 Yalitza Aparicio stars as Cleo Gutierrez, the maid and nanny in question. She lives in an apartment behind the garage of a white family in Mexico in 1970. The family consists of a father, mother and four children. The father is a doctor. It’s not sure what the mother does for work. The four children look like they’re all between the ages of 6 and 13. Cleo picks them up from school. She does the laundry. She cleans the house. The opening scene in fact is a 5-minute sequence of her washing the floor of the garage or car port.

Cuarón is known for his long, one-take shots that are unedited or unbroken. That opening scene is one such example. It’s great for establishing the work that Cleo has to do and the space in which she works. We see the family’s dog at the end of that shot, and it’s not until later that we learn that the dog is the reason for her needing to wash that floor. None of the shots are as frenetic or hand-held, which increases the difficulty of the shot, as the infamous long, one-take in Children of Men. Most of the  shots are fixed and merely tilt up or pan right or left. One shot early has the camera locked down but spin around a full 360 degrees in a circle.

These shots aren’t the spectacle that Cuarón normally uses these shots for. These shots are simply to give a sense of space in the house. These shots don’t reveal much about character or plot. Many of the shots simply are static as we watch Cleo walk from here to there. Several shots simply stand still as we watch her go up and down stairs. There are perhaps some symbolism to these shots, showing Cleo’s descent or ascent, but otherwise these shots come across as boring. One sequence has Cleo pregnant and going into labor. The sequence follows her in the back of the car, in the lobby, in the elevator and in the hallway. Cuarón lets the camera keep rolling even after the character leaves the frame and waits before cutting. It’s too long and boring as we stare at an empty hallway.

Eventually, it gets to a point in that sequence where we see Cleo giving birth, which is incredible. That point is what’s the standout. Yet, all of the stuff leading up to it was rather unnecessary. There is a sequence at the end where the camera is locked down, but it’s locked down in the ocean as huge waves wash over Cleo and the children. It’s probably the best shot in the film, other than the opening shot.

Marina de Tavira co-stars as Sofi, the mother of the family. She gives a good performance as a woman whose husband is not around and who has to hold things together by herself. She’s dealing with the fact that her marriage is possibly dissolving. Jorge Antonio Guerrero plays Fermín, the boyfriend of Cleo. He talks about being from the slums, getting involved with the wrong crowd and being “saved” through martial arts. He appears to be a link to the Corpus Christi massacre. That massacre featured a paramilitary of young men wielding bamboo or kendo sticks, which we see Fermín possess. Cuarón though is less concerned with Fermín’s politics as he is with his naked body, which we see in Full Monty.

It’s also notable to point out that a character named Professor Zovek appears in this film. Zovek is played by a famous Mexican wrestler or luchador named “Latin Lover” aka Victor Manuel Resendiz Ruiz. His scene is weird and maybe a little wacky. It’s a scene of sheer comedy rather than the drama that dominates most of the rest. There are other comedic bits sprinkled throughout like a scene of a car being parked badly and a scene of that same Ford being driven badly. Other than that, the film is pretty balanced toward serious realism. 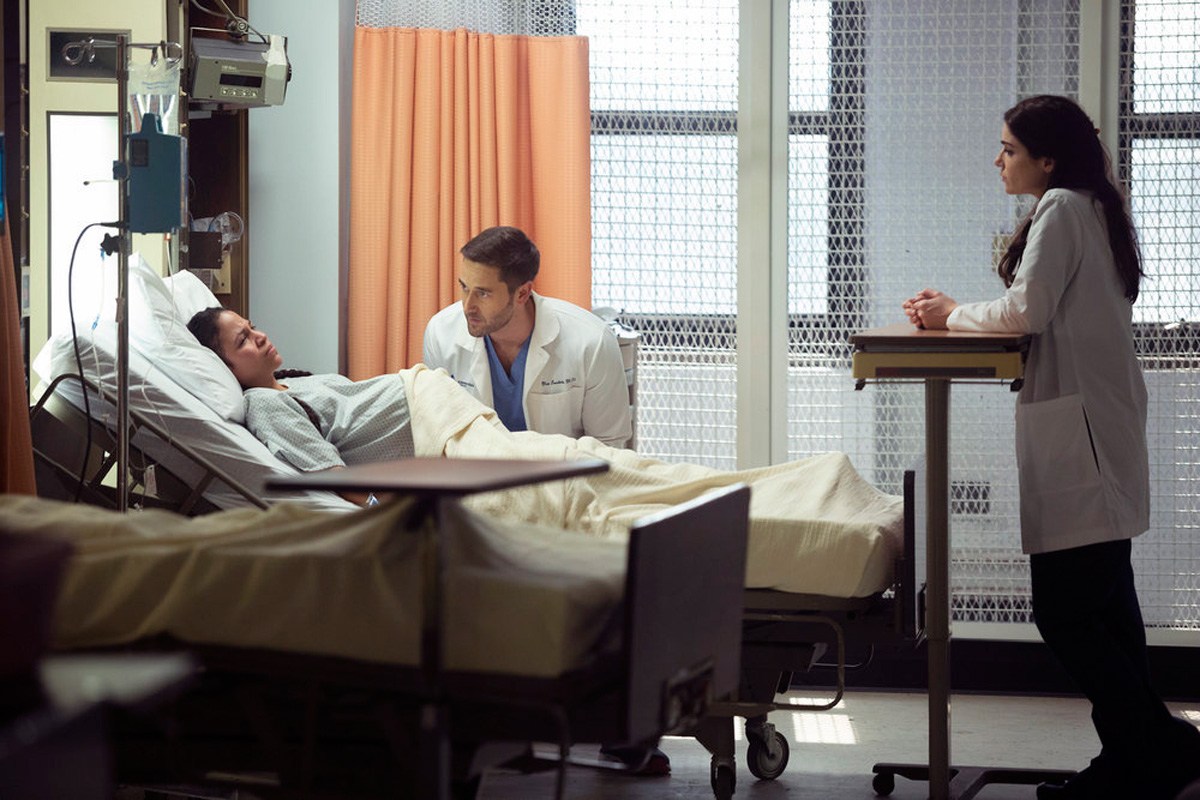 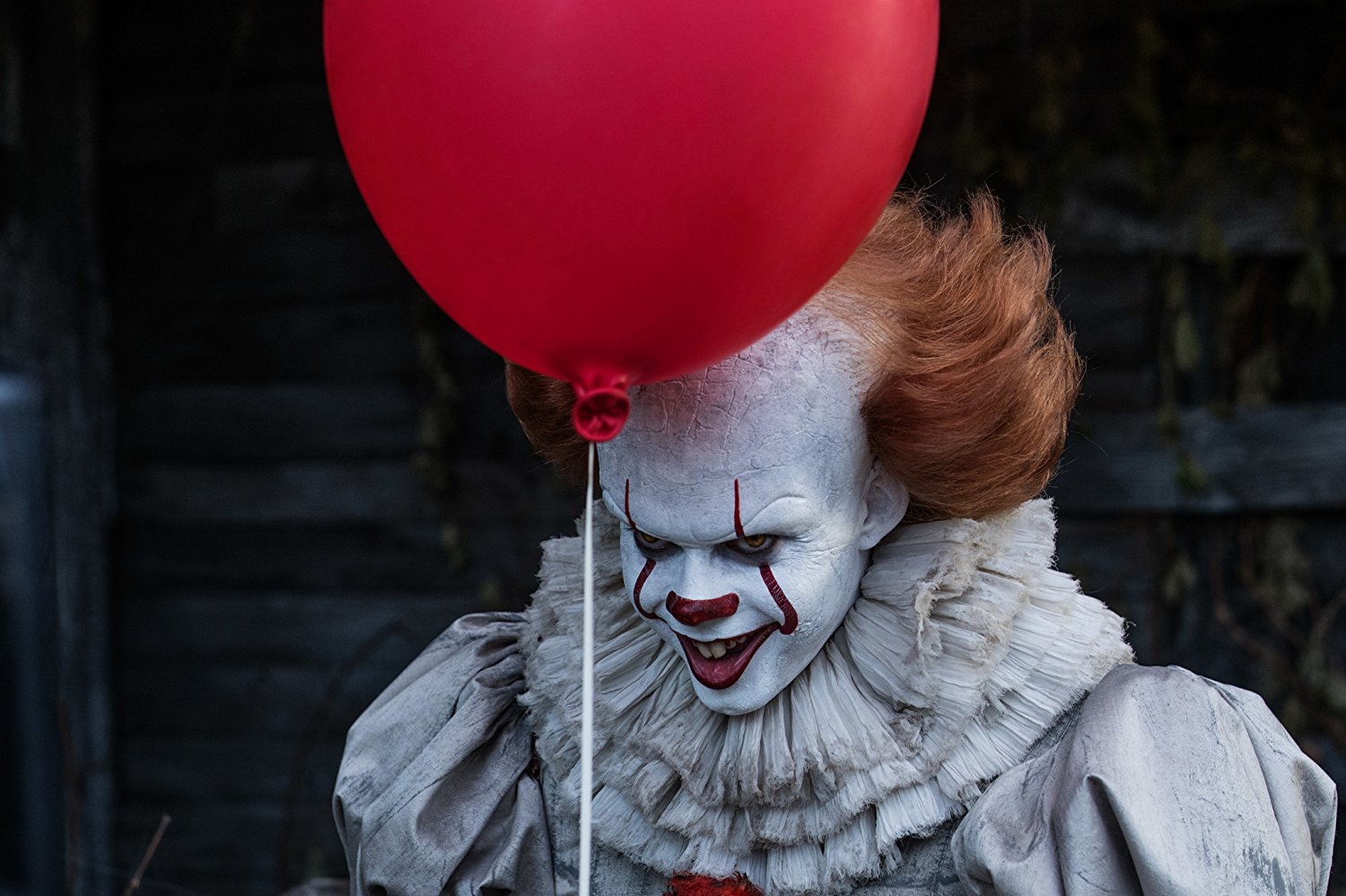 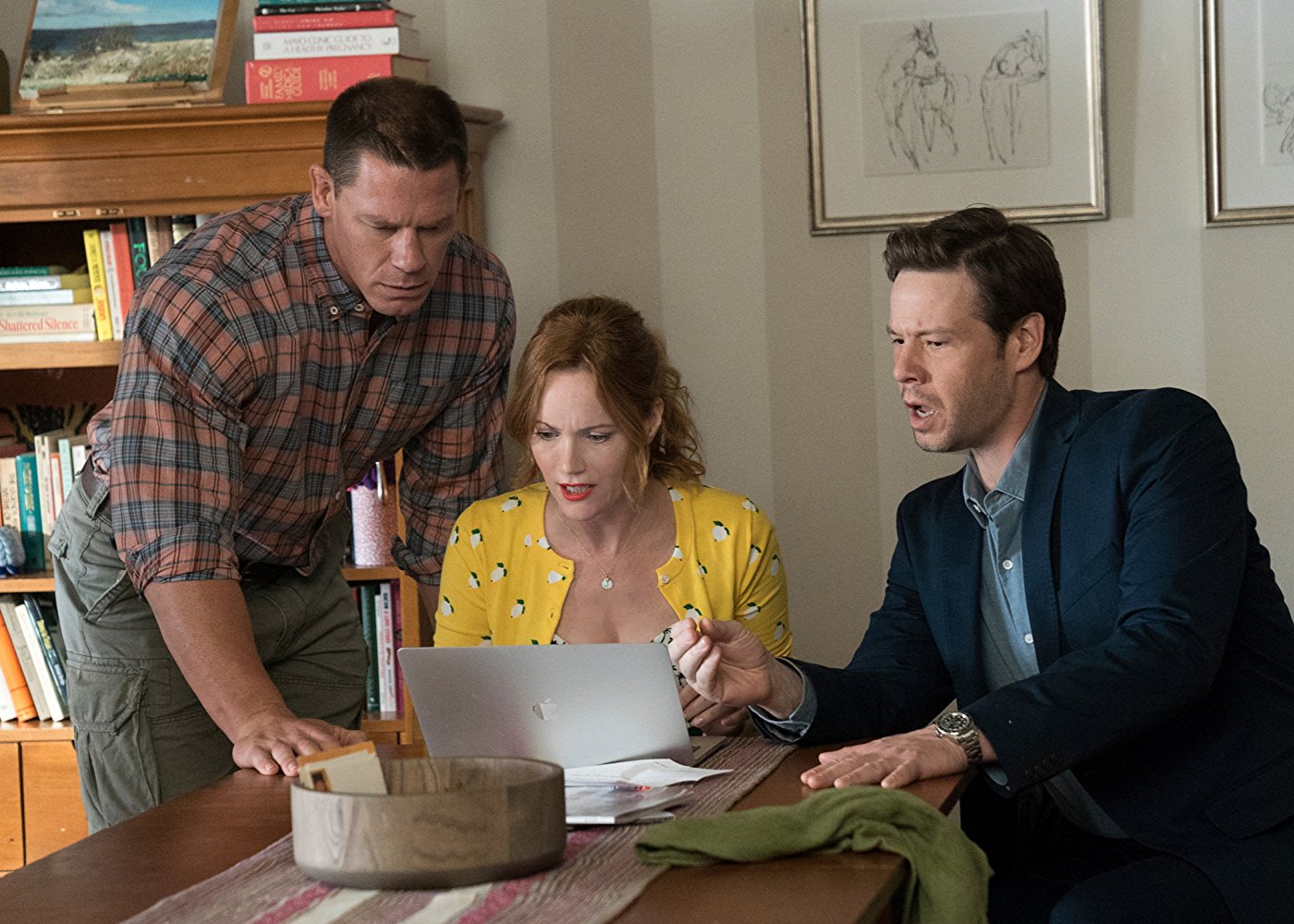