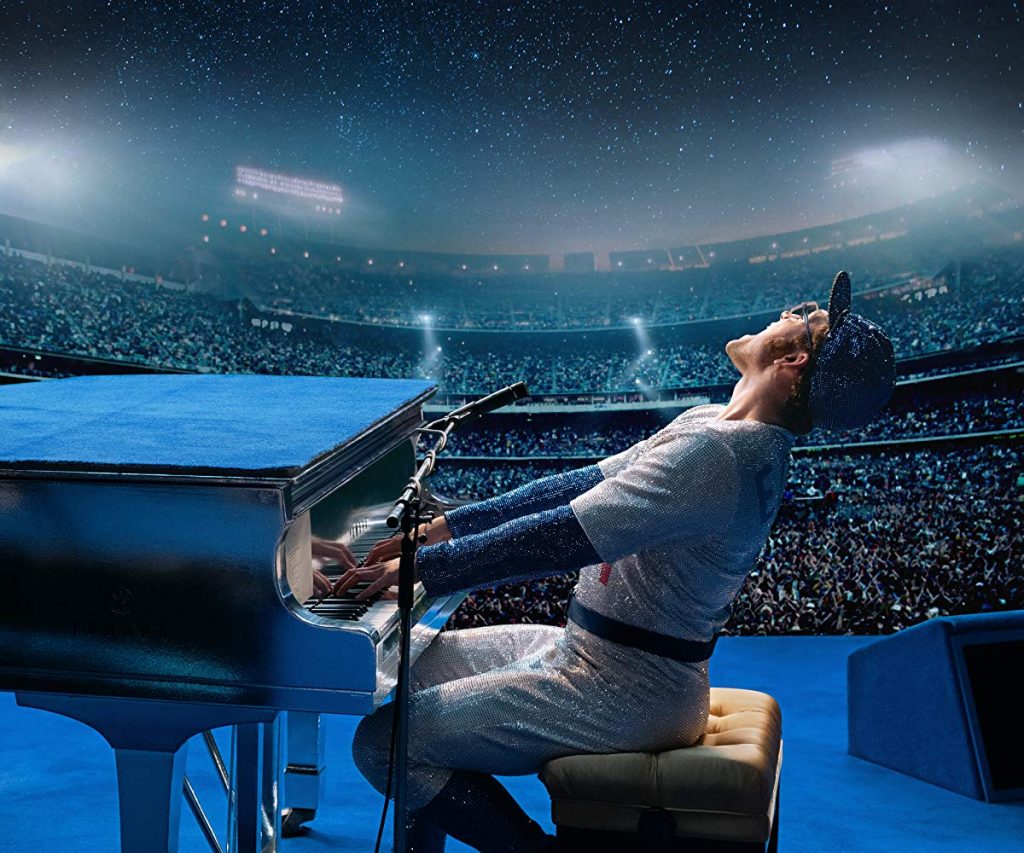 With any musical biopic, the draw is usually the audience’s love for the artist at the center and that person’s songs. Clearly, Elton John has a lot of love and has been getting a lot of love from audiences for more than 50 years. John is in the top five of best-selling artists of all-time. He began performing in the 1960’s. His height was in the 70’s and persisted into the 80’s and 90’s. He has over 50 songs that were in the Top 40. Probably half of all those songs are performed in this film. Director Dexter Fletcher wields these songs, much in the way ABBA’s songs were wielded in Mamma Mia! (2008). That makes this film not just a film about musicians. It’s also an out-and-out musical. People are in biographical scenes about John’s life and then all of a sudden will burst into a choreographed dance number. Unlike Bohemian Rhapsody (2018), which Fletcher also helped produce, the songs here are non-diegetic. Yes, we see John on stage and in a recording studio, but numbers occur at dining tables, on the street or random places where people just start singing, stepping out of the reality of whatever scenario they found themselves.

Taron Egerton (Robin Hood and Kingsman: The Secret Service) stars as Reginald Dwight, the man who will come to be known as Elton Hercules John. Unlike Bohemian Rhapsody, Egerton doesn’t just lip-sync. Egerton actually sings on the soundtrack, doing faithful renditions of dozens of John’s songs. His energy and passion as he’s doing so, as well as his dedication, is akin to Rami Malek doing Freddie Mercury in Bohemian Rhapsody. The difference is that Egerton’s own voice is being heard and not a dub, which was the case every time Malek opened his mouth to sing. This makes me favor Egerton’s performance here over Malek, but the story and the characters aren’t that spectacular or even all that different. 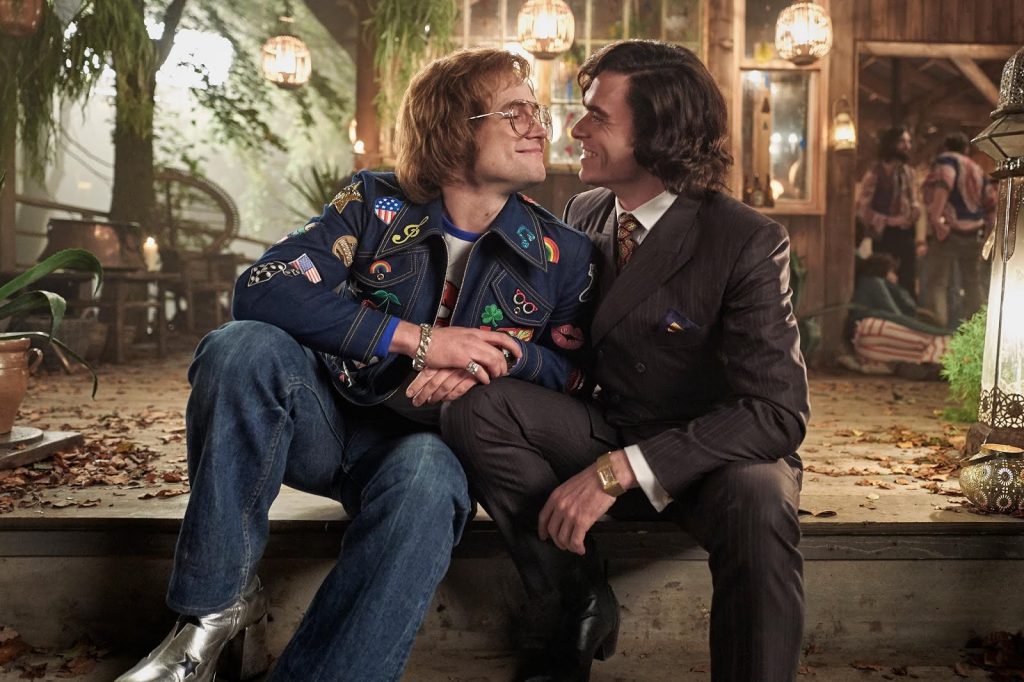 Basically, the story and characters are nothing new and nothing we haven’t seen before in tons of music biopics. Bohemian Rhapsody is the obvious comparison for several reasons. For starters, it’s the most recent. As mentioned, Fletcher not only directed this film but he helped to direct Bohemian Rhapsody. Both films center around a gay man or queer musician who is British. Both musicians in both films are flamboyant on stage, although Elton John leans more toward Liberace. Both films have their protagonists struggle with their managers. In fact, the music manager in Bohemian Rhapsody and the music manager here are the same person. That person is played by two different actors, but the character or the person is the same.

Richard Madden (Bodyguard and Game of Thrones) co-stars as John Reid, the music manager who seduces Elton into having them work together, as well as have a secret romance. If one has seen Bohemian Rhapsody, it’ll be obvious where John is going or what he’s going to do. John Reid ultimately ends as a kind of unlikable person and a bit of a creep in Bohemian Rhapsody. That character isn’t re-imagined any differently here, except he is initially presented as a kind of manna from heaven, delivered to answer all of Elton’s romantic and lustful prayers. Madden with his sexy, Scottish accent and drop-dead gorgeous looks, certainly sells that aspect. 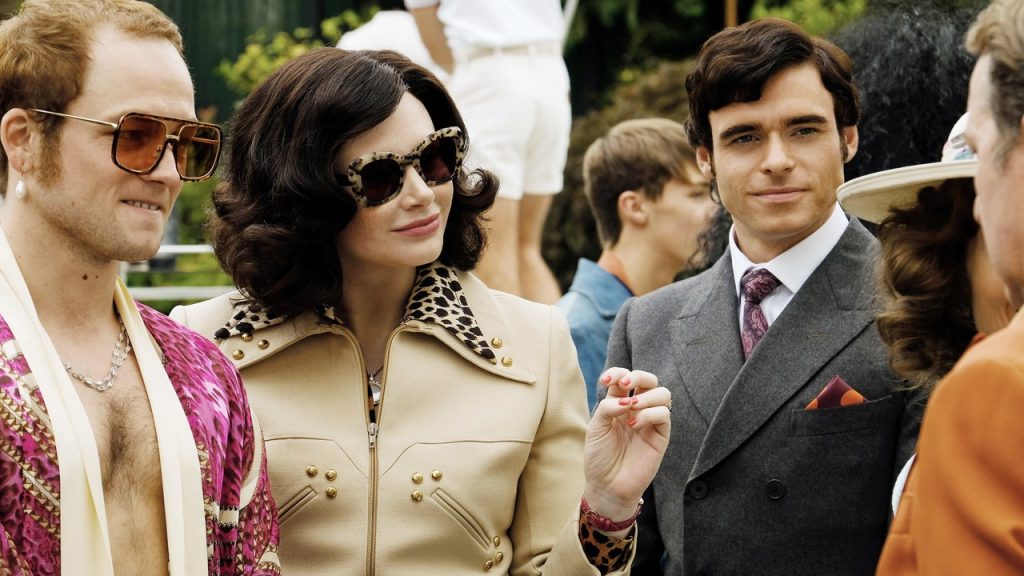 Yet, John Reid remains evermore the caricature here than in Bohemian Rhapsody. A lot of that can be dismissed away because the framing device for this film is that Elton John is in rehab and is remembering back over his life. As such, his memory doesn’t have to be generous or three-dimensional in his recollections. The musical numbers can be explained that way too. They’re just flights of fancy in Elton’s imagining of his own memories. Unfortunately, a caricature doesn’t help me to engage with the character on any level beyond the superficial. He is simply an object of either attraction or repulsion, no nuance.

Bryce Dallas Howard (Jurassic World and The Help) also co-stars as Sheila, the mother to Elton John. She’s less of a caricature than John Reid. She gets nuance and colors to her character that make her seem more real. Howard’s performance at first feels like a caricature, but, as the film goes along, more shades to her are revealed. Through her and Steven Mackintosh who plays Stanley, the father to Elton John, we get that a theme of this film is a parent’s disappointment or detachment and how that can affect a child’s development. Howard and Mackintosh get scenes where they can individually underscore this point. Not more from them was needed, but getting more scenes that focus on their characters would have been appreciated. 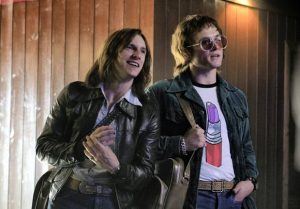 Jamie Bell (Snowpiercer and Billy Elliot) plays Bernie Taupin, the lyricist who met Elton John early in his career. Bernie helped Elton co-write practically all of his songs. Bernie was essentially Elton’s best friend. Bell and Egerton have a couple of good scenes together, but their relationship needed more because I never felt the weight of their love for each other. When the two fall out or separate only to then reunite at the end, that arc felt perfunctory or half-baked. I just was never sold on Elton and Bernie.

Elton gets married. The woman who plays his wife is also not developed. We learn her name but nothing else about her. I get that it’s meant to be a plot point toward this grander idea about Elton’s lack of a romantic life or his frustrations because it seems he only has meaningless sex. However, other than the brief scenes with John Reid, Elton’s romantic or sex life is given short shrift. There is a musical number where Elton goes shirtless and is carried in the air by other half-dressed people like he’s crowd-surfing. This is supposed to be representative of either an orgy or Elton’s possible promiscuity, as expressed as being a part of his sex addiction. 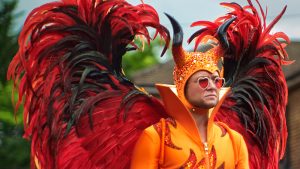 Some critics worried that this film would do the same thing as Bohemian Rhapsody and that is queer-baiting. Yes, there is a scene where Freddie Mercury kisses another guy, but, to some gay men, this is just the bait. The rest of the film never depicts gay sex, which some might think would be alienating to mainstream audiences. This film doesn’t do that. We see a gay sex scene between Elton and John Reid. That scene is brief and edited to an inch of its life, but at least it’s there.

Rated R for language, some drug use and sexual content.
Running Time: 2 hrs. and 1 min. 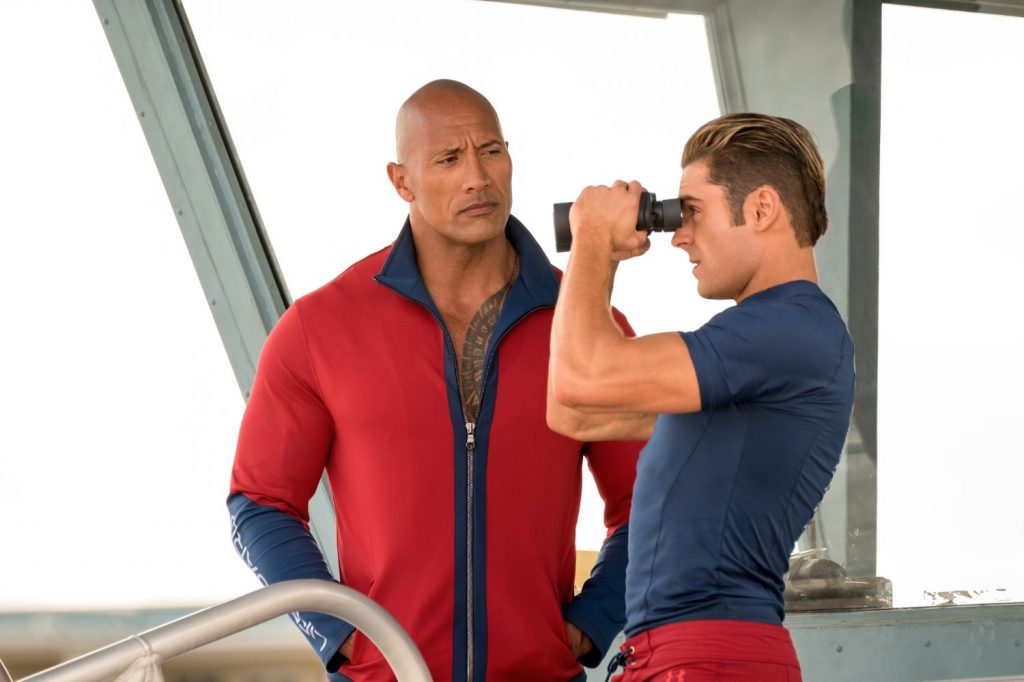 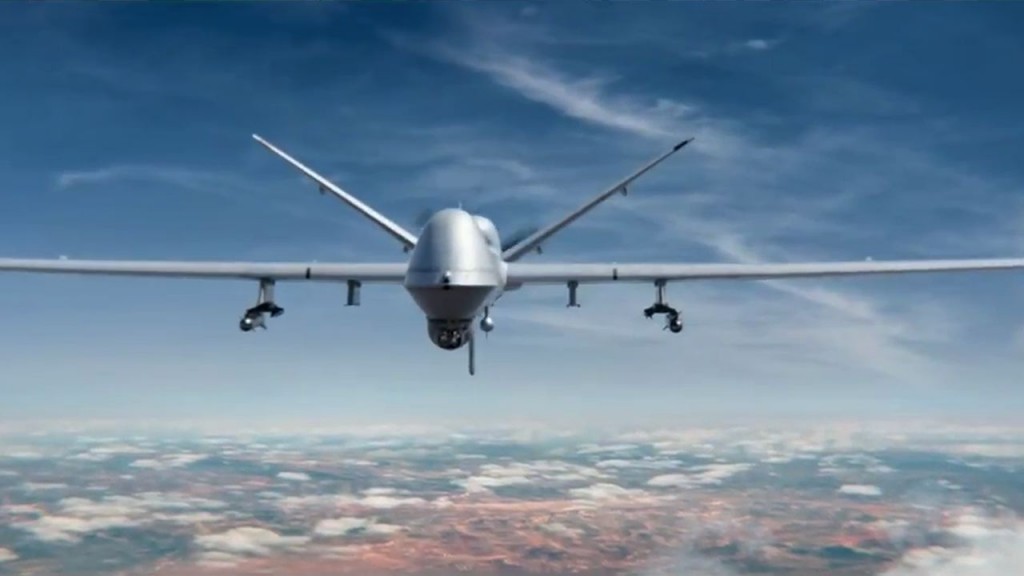