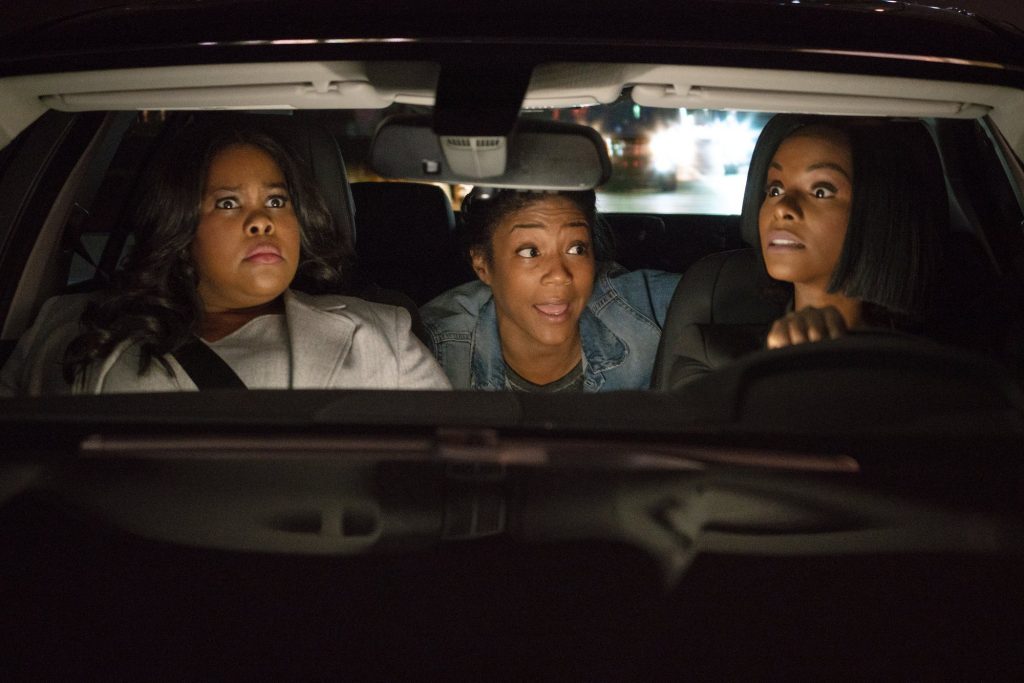 This is the 19th feature that Tyler Perry has written and directed. With the exception of two films earlier in his career, most of his films remain below 40 percent on Rotten Tomatoes. Of all the films he’s directed including this one, I’ve only enjoyed about eight of them, which means that my enjoyment rate of Perry’s films is also around 40 percent. Basically, he’s hit or miss with me. Of the films that I have enjoyed from him, I would never argue that any of them are cinematic treasures to ever hold onto for future reference. Even his most enjoyable films are ultimately forgettable. They’re entertaining for a single viewing and then disposal almost immediately. The one exception might be Why Did I Get Married? (2007), but even that might be a stretch. Given that 11 of the 19 contain the loud and crazy character of Madea, it’s clear that Perry has a preference or penchant for comedy.

His comedies though often are just Madea, played by Perry himself, sitting or standing around cracking jokes, insulting everyone around her, speaking in her own form of ebonics or straight cursing and regularly threatening violence on any and all who get on her nerves. It’s rare, if never, for him to do a comedy without that character doing that shtick. This might be the first comedy he’s directed without Madea. However, like Woody Allen does with his comedies in which he’s not an actor, Perry instead uses a proxy for himself. That proxy in this case is played by Tiffany Haddish. Haddish whose breakout role in Girls Trip (2017) basically employs the same kind of comedy she did in that 2017 film but turned up to 11. It makes Haddish the perfect proxy for Perry’s Madea. In fact, Haddish could play the younger version of Madea, if Perry decides to do a film where he flashes back to Madea’s youth.

Perry’s dramas normally consist of a black woman being in a toxic or abusive relationship with a man, usually a man of some wealth, until she eventually finds a man who’s been made good through some kind of redemption. Perry’s dramatic elements are often repeated in his comedies too. When they are repeated, it can be frustrating. At least the comedies have something to entertain in that regard. His dramas on the other hand usually just land with a thud. He certainly has a formula it seems for churning out his scripts as fast as he does, but not always, and when he deviates from that formula, it can be exciting. He doesn’t really deviate from that formula here, but that’s fine because it’s buttressed with a comedic onslaught from Haddish. 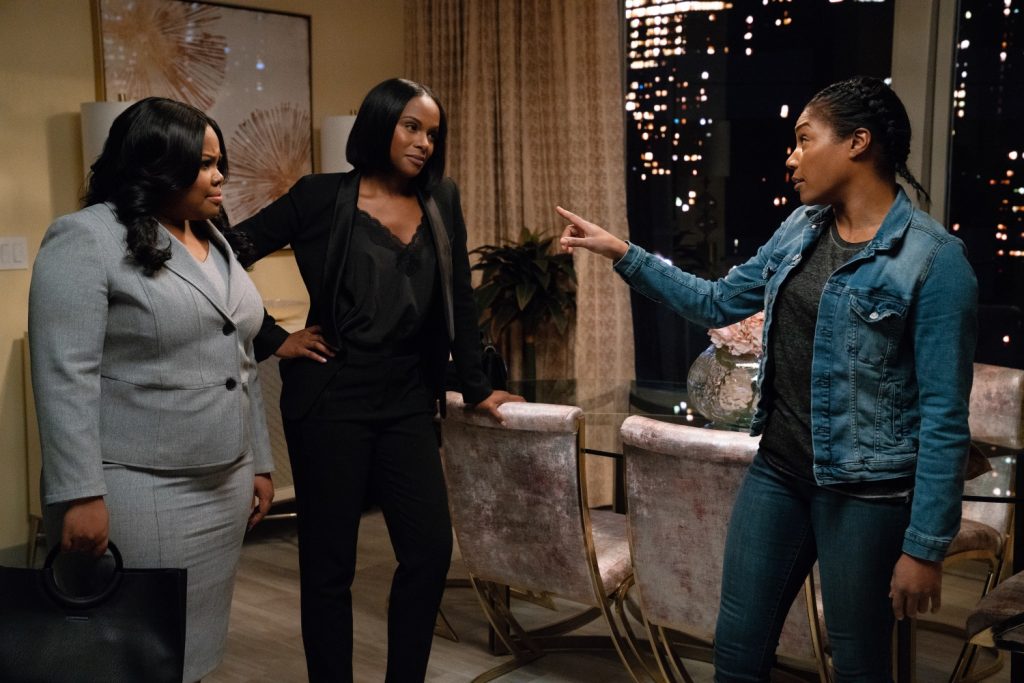 Tika Sumpter (Southside With You and Ride Along) stars as Danica, an advertising executive and black woman living in a beautiful apartment in a very tall building in some unnamed city. She’s beautiful, smart and has a lovely personality, but she was recently dumped. As a result, she’s gotten involved with another man whom she’s never met and to whom she’s only talked on the phone.

Haddish plays Tanya, the sister to Danica. Tanya has recently been released from prison. She needs a place to stay and a job. She also needs to attend AA meetings as part of her probation. Her mother won’t let her stay at home, so she goes to stay with her sister at the insistence of her mother. Tanya has only been incarcerated for five years, but, in that time, she hasn’t really talked to her sister, so she doesn’t know all the changes to Danica’s life. When Tanya re-enters Danica’s life, she’s obviously impressed and every reaction is either loud, in-your-face or way over-the-top, but it is hilarious and funny.

Omari Hardwick (Power and Being Mary Jane) co-stars as Frank, the owner of a coffee shop next door to where Danica works. He gives Danica a free cup of coffee and a rose every morning when she comes into his store right before she goes into her job. He clearly has a crush on her, but he never asks her out. He just gives her the drink and flower without ever inquiring more. He does become aware that she has a boyfriend whom she’s never met, but he’s never aggressive about pursuing her.

It’s funny that Perry sets up this situation that’s ripped right from an episode of MTV’s Catfish and then Perry leans into that by incorporating the two hosts of that MTV series directly into this film. The plot of which is predictable but nevertheless it allows Haddish to blow through each scene like a hurricane, mostly just being overtly sexual, aggressively sexual and raunchy to the max, literally to a Max in one scene. 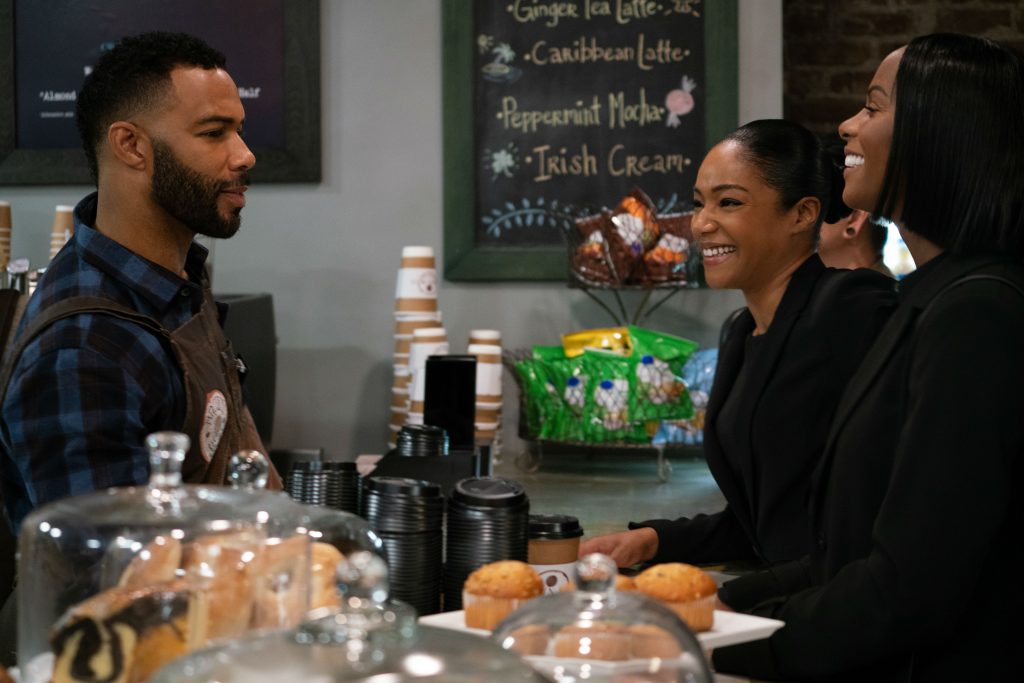 The film then turns and becomes a romantic comedy. The movie is set up that one thinks it’s going to go the way of Girls Trip or even Bridesmaids (2011) where the real relationship of consequence is that between the women. In Girls Trip, it was all about friendship. Here, it seems as if the ending is going to be all about sisterhood, the literal sisterhood between Danica and Tanya, but that’s not really at issue. We never really dig into that relationship. The movie instead is all about what man is Danica going to choose, the quasi-anonymous man on the phone or Frank, the obvious choice to everyone except Danica. Like most rom-coms, there’s a gimmick of Danica wanting a man who conforms to everything on a list she made, but that becomes even more of a throwaway.

Because of the obviousness of the choice, the second-half of the film could seem inherently boring. Its only saving grace is that there is a rarity of films that depict a love story between two black people. Girls Trip touched upon it, but that film doesn’t lean into it like this one does. This movie, for example, actually gives the audience a sex scene between two beautiful black people. That kind of romance or depiction of black love is not often on the big screen.

Hardwick did have an independent film be released this same year, which was also a depiction of black love. It was called A Boy. A Girl. A Dream, but it didn’t get the wide release of this film. It wasn’t a main focus, but romance between black people was a little bit on display in Sparkle (2012), the remake that co-starred Hardwick with Sumpter. Sumpter also has done black romance in Southside With You (2016), the film in which Sumpter played Michelle Robinson, the future wife of Barack Obama. That film didn’t have the sexual energy though that this one does. Like Crazy Rich Asians, this movie satisfies a certain kind of audience yearning for that kind of black romantic, sexual energy. 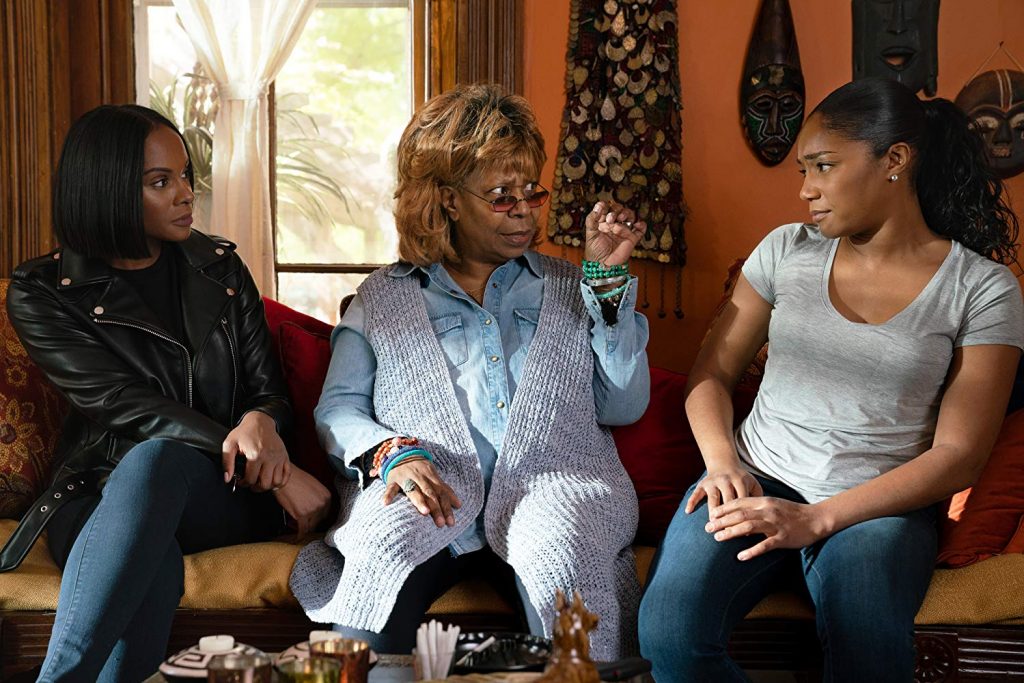 Whoopi Goldberg plays Lola, the mother to Danica and Tanya. She’s really great in her brief scenes. This isn’t the first time Goldberg has worked with Perry. She also had a role in Perry’s For Colored Girls (2010), which also featured Hardwick. Sumpter has of course worked with Perry in various projects. She was cast in Perry’s television soap, The Haves and Have Nots, as well as his 14th feature, A Madea Christmas (2013). Of all those previous works, involving all of these people, this is by far the best, if certainly the most fun.

Rated R for language and some nudity.
Running Time: 1 hr. and 50 mins. 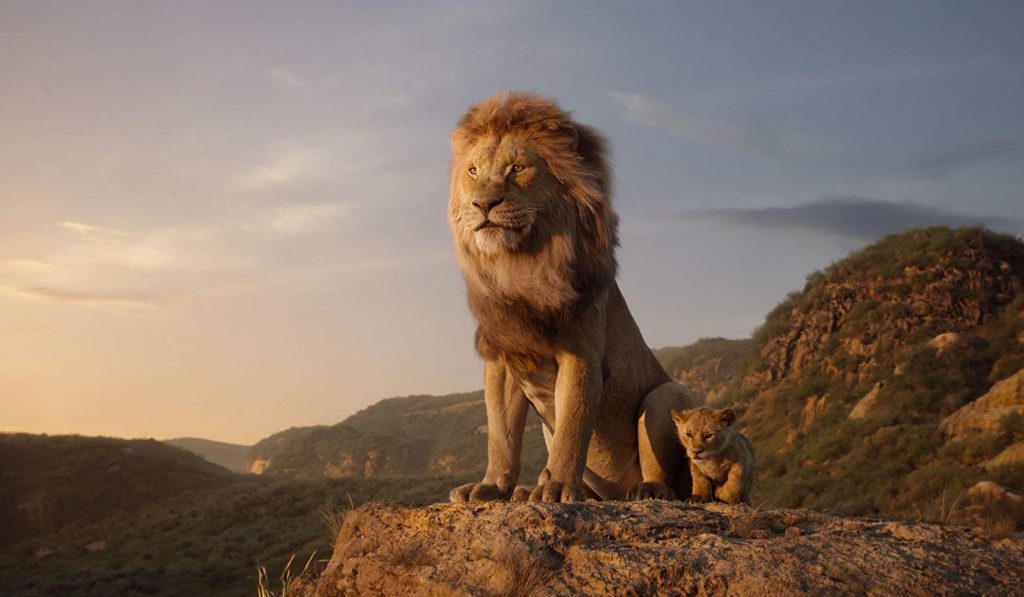 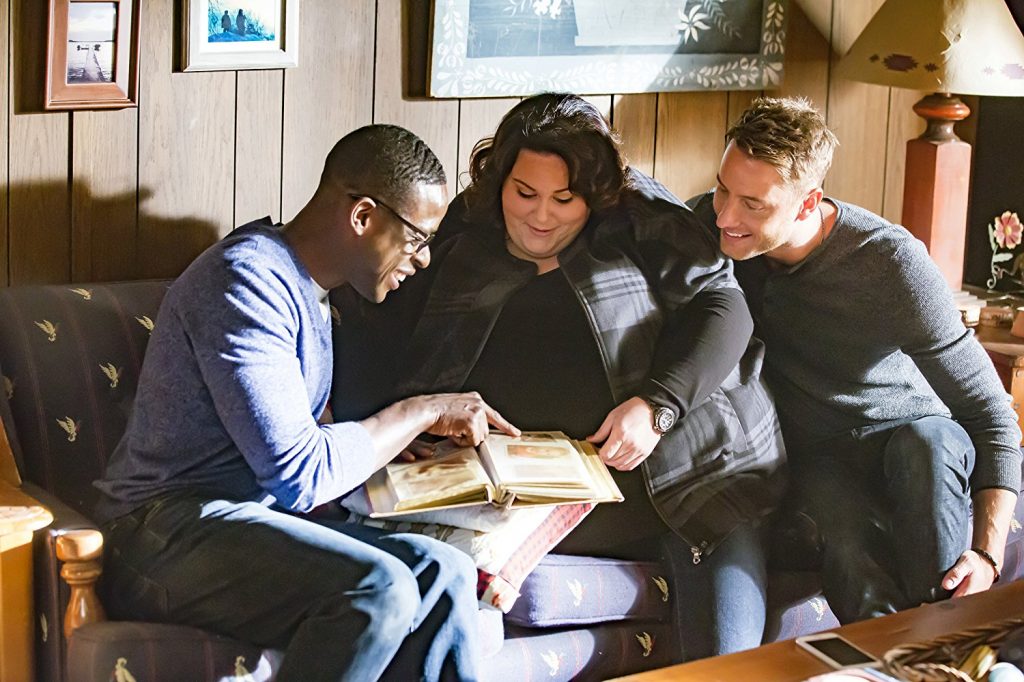 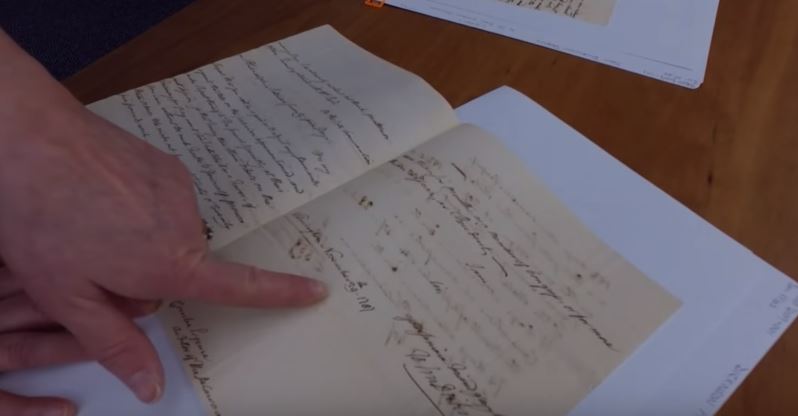