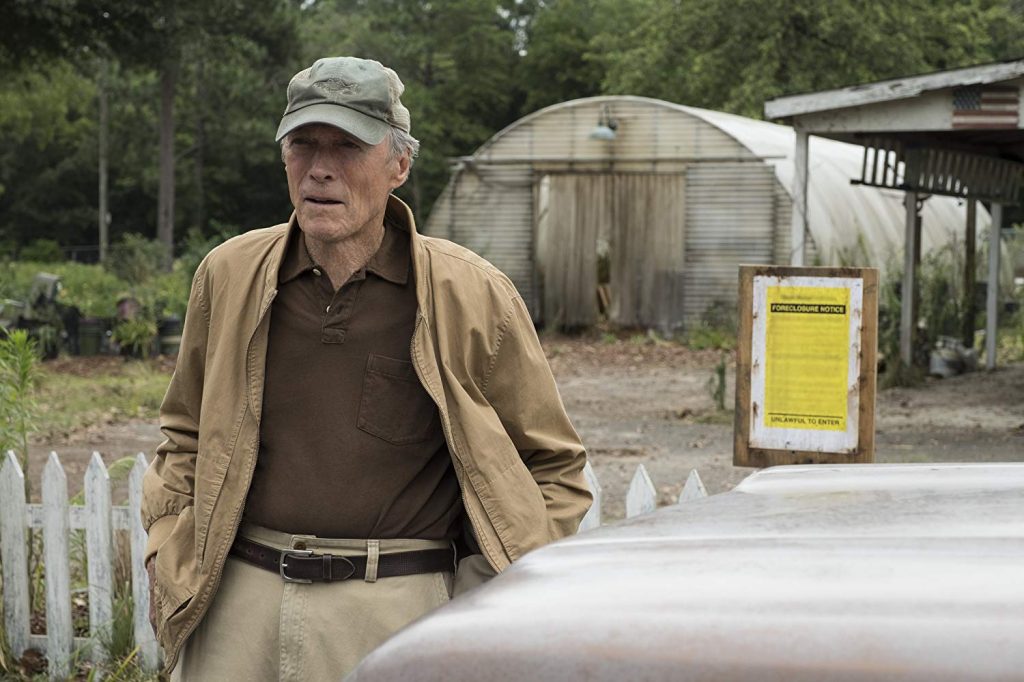 Clint Eastwood has directed 37 feature films. The majority of them has had Eastwood himself as the star or main actor. However, Eastwood hadn’t starred in one of his own films since Gran Torino(2008). It’s been a decade since he put himself in the center of one of his own projects and it turns out to be not a bad choice, but in a weird way I don’t think the movie makes all that much use of Eastwood’s age as it perhaps should or could have. The only thing with his age that the film does is use it as a punchline for why he doesn’t get the Internet, smartphones or certain politically correct speech, specifically when it comes to racist or offensive terms toward black and Latino people.

The film is an adaptation of an article by Sam Dolnick in The New York Times. Nick Schenk wrote the adaptation. Schenk also wrote Gran Torino. The article was about a real-life nonagenarian who was arrested as being a drug mule for the Sinoloa cartel, the world’s most notorious and powerful drug-trafficking ring, led by Joaquin Guzman aka “El Chapo.” The Sinoloa cartel pumped thousands of kilos of cocaine from the Mexico border into the United States. The article traces the ring to Detroit. This film changes the city to instead Chicago.

Eastwood stars as Earl Stone, a Korean War veteran. He’s an elderly horticulturalist in Peoria, Illinois, who might be successful in his farming life but he doesn’t seem to be as successful in his family life. Earl attends an event where he wins an award for how good he is at botany rather than attending his daughter’s wedding. This proves to be the breaking point for him and his wife. This break happens in 2005. By 2017, he’s totally estranged from his wife and children. His farm is also in foreclosure and he’s virtually homeless. He still manages to crash family events like his granddaughter’s wedding. He’s kicked out, but not before he meets a guy who recommends him for a driving job.

Earl suspects something criminal about this job, but he doesn’t ask too many questions. All he knows is that he has to pick up a package at a garage in El Paso, Texas, and drive it to some motel in Illinois in his truck. For it, he gets a ton of cash put into his glove box. In the article, it’s revealed that the real guy was referred by Mexican laborers who worked on his farm, but for dramatic purposes, Schenk made the referral happen at his granddaughter’s wedding.

Some changes that were made is the fact that the movie makes it seem like Earl was only doing this for a year or at least since 2017. Yet, in fact, the article reveals that the real-life guy was a drug mule for the better part of a decade. He was finally stopped at the age of 90 or at least that’s how old he was when he was convicted, but he was this highly-profitable, drug runner through his 80’s.

This film compresses that time to focus on the road trip aspects of Earl being a drug runner. In that, this film is not that uncommon from Eastwood’s previous film from earlier this year, The 15:17 to Paris. Thankfully, this film doesn’t simply revel in the road trip aspects for revel’s sake. In other words, this road trip doesn’t meander. There is purposefulness to these road trips. Earl is trying to reconnect with his family and help his friends. Earl sees this drug money as a way of doing that, which keep him linked to them and not be totally alone. There aren’t perhaps enough scenes that depict him making and holding onto those links, but it’s not deficient here. 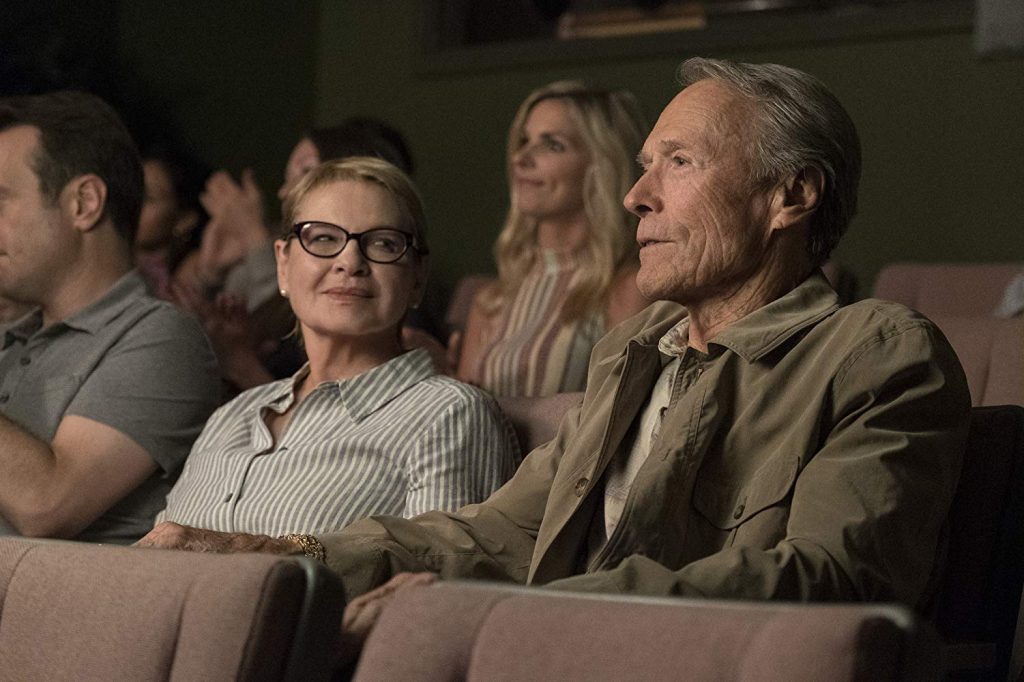 Dianne Wiest (Hannah and Her Sisters and Bullets Over Broadway) plays Mary, the ex-wife of Earl whose interactions demonstrate the distance he has with his family and the link he’s trying to maintain. She’s not in this film a lot but the handful of scenes that she does have do reveal this push-and-pull dynamic for Earl. This dynamic is what’s driving those road trip scenes and that’s why those scenes don’t feel like just shots of Earl driving back-and-forth as those scenes of the guys walking around in The 15:17 to Paris felt like just guys walking around aimlessly.

What the road aspects also do is something we don’t normally get from Eastwood as an actor. We see Eastwood smiling. I can’t be sure that he ever smiled once in Gran Torino, even when he was making racist jokes. Eastwood has long had the reputation of playing cowboys and characters in westerns who are pretty tough. Lately, meaning within the past 20 or even 30 years, he’s really taken on the persona, probably both on screen and off, as a grumpy old man, the epitome of a curmudgeon. However, this film gives us a softer side, a happier side, a charming side and a side that smiles. We also see something we don’t see from someone his age and that is a near-90 person having sex. 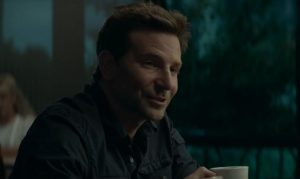 Bradley Cooper, who worked with Eastwood in the hit film American Sniper (2014), co-stars as Colin Bates, the DEA agent investigating drug trafficking in the area and who tries to discover who Earl is. In these crime dramas, it’s common for the film to follow the police as they do what they normally do to track down the criminals. Michael Mann’s Heat (1995) is probably the prime example that people think and is probably a gold standard. This movie does not come close to Heat. Cooper though is able to do some interesting things with this character, but it’s ultimately an unnecessary diversion from something potentially more interesting at play here.
Ignacio Serricchio (Lost in Space and The Young and the Restless) also co-stars as Julio, the handler for Earl. He’s a part of the cartel at the top who works closely with the cartel leader to make sure everything is running smoothly. Despite the fact that Earl has been helping the cartel to increase the amount of cocaine it’s been moving across the country, Julio doesn’t trust Earl and is forced to accompany him on the road trips. The relationship that Earl forms with Julio, as well as the other Latino characters here are very interesting. The little arc for Julio in this movie is filled with tension and humor and a tad bit of heartache that always made it engaging to watch.
I wish the movie did more with the other Latino characters like Rico, played by Victor Rasuk, or Axl, played by Manny Montana. Rico is the guy who initially recommends Earl for this drug running job. Axl is a cartel member who works with others like an unnamed cartel member, played by Clifton Collins Jr., to overthrow the cartel leader. I wish we’d gotten more of that because those characters otherwise were just caricatures that could have been developed into something compelling in this story. 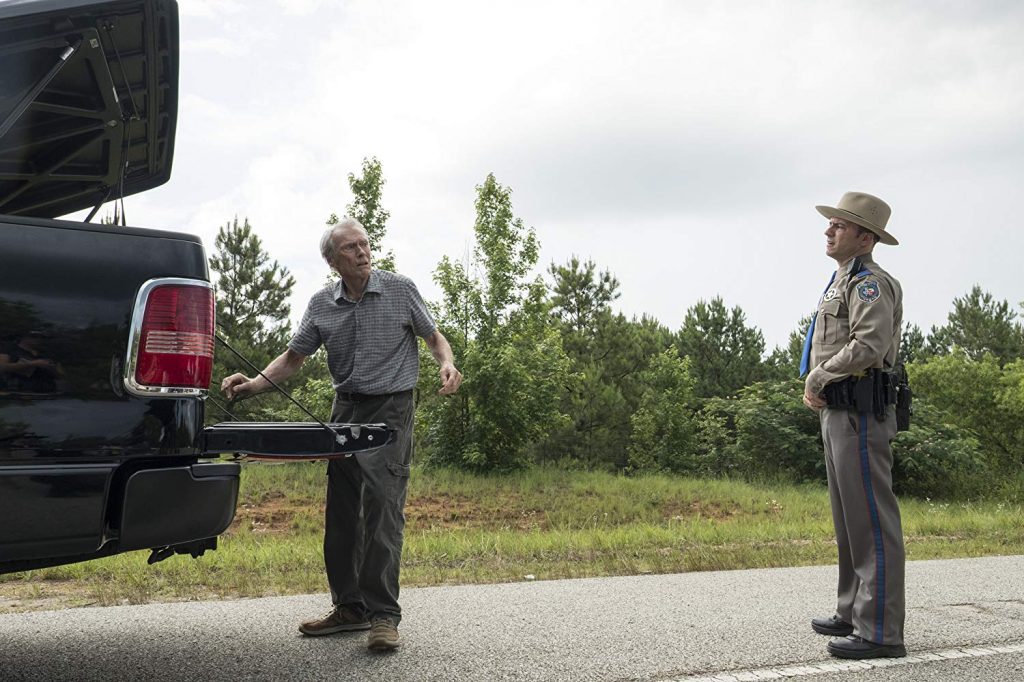