The original Mary Poppins (1964) was a massive hit for Disney and still remains one of the company’s most successful properties, even in the 54 years since. It was nominated for 13 Academy Awards, including Best Picture. It won five, including Best Original Score, Best Original Song, Best Visual Effects, Best Film Editing and Best Actress for Julie Andrews in the titular role. Why did it take 54 years for Disney to make this sequel? It’s not from a lack of trying.

The film was based on a series of books by author PL Travers. Travers blocked Disney from its attempts to make this sequel all the way up to her death in 1996. With the mega-success of Alice in Wonderland (2010), Disney revitalized its efforts to make big-budget and quite frankly lavish remakes or sequels of its most famous franchises. Most have simply been remakes. This one is one of the few sequels. Yes, like all the rest, it’s basically repeating everything that was done previously. Here, it’s slightly better because we get a host of new songs at least and characterizations that are perhaps better. Other than that, it’s just slight variations from the 1964 version. Arguably, this version is more fun than the original with perhaps a tad more energy and even nuance.

Emily Blunt (A Quiet Place and Edge of Tomorrow) stars as Mary Poppins, the magical nanny who slowly descends from the heavens with the aid of an umbrella that is revealed to be able to talk. She’s dressed in Victorian-style clothing and she carries a handbag that is itself magical and can carry a multitude of things. She apparently has the power of telekinesis and bending reality with the purpose of fostering the imagination of children or inner-children, mostly to help through the chores or duties of the day. She is lovely and “practically perfect,” but she can be tough and stern in order to guide the youngsters. She takes no nonsense, even as she dispenses it. She’s prim and proper, but she can shoot a good one-liner every now and then. Her goal though always seems to be to strengthen families under strife, particularly one family. 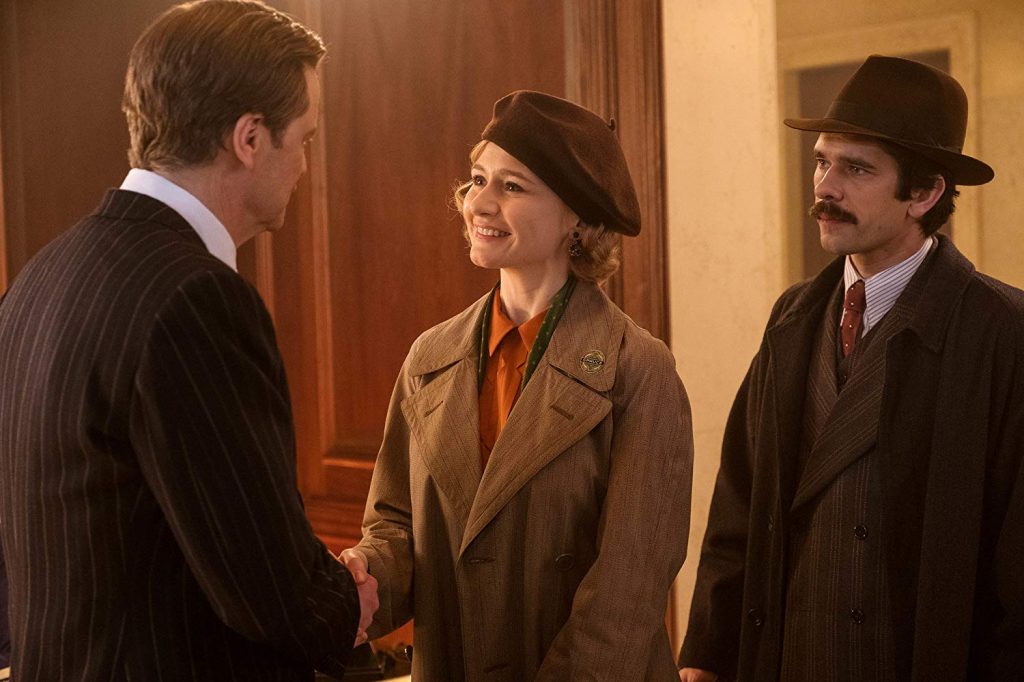 Ben Whishaw (Skyfall and Cloud Atlas) co-stars as Michael Banks, one of the children in the original film who’s now an adult. He’s also a widower with three children. He is the proprietor of his family’s house on Cherry Tree Lane in London, England. In his heart, he’s an artist, a painter, but since his wife’s death and the Great Depression aka “The Great Slump,” Michael has had to get a job as a bank teller. Because of things falling apart in the house like bad plumbing and other things, he’s fallen behind in his mortgage payments. He learns that he’s facing foreclosure. He has the money to pay it in the form of shares that he inherited from his father. Unfortunately, he can’t find the certificate and the bank won’t take him at his word, even though his father worked at the exact same bank. The thrust of the movie is Michael trying to find that certificate, so that he can keep his family’s house.

Emily Mortimer (Hugo and Match Point) plays Jane Banks, the sister to Michael. Her presence in this film is very minimal as to register as anything other than cute. Jane also is a labor organizer. We see her trying to organize a protest, much in the same way her mother did in the 1964 film. Like the 1964 film though, this movie doesn’t devote really any significant time to depicting that part of Jane’s life. She doesn’t even get a solo song.

Lin-Manuel Miranda, the Tony-winning, Broadway star from Hamilton, also co-stars as Jack, a lamp lighter who works the streets of London, making sure a fire is burning in the city’s street lamps, as well as making sure they’re regularly cleaned. He has a very sunny and cheerful disposition. He’s the equivalent of Dick Van Dyke’s character from the original. He’s even given a musical number that’s similar to Dyke’s famous chimney sweep numbers “Chim Chim Cheree” and “Step in Time.” It’s even choreographed in a similar way. Jack though is the first adult to recognize Mary Poppins and remember that she is magical and that her powers are real. He rides his bicycle assisting her and the children. Meanwhile, he has a crush on Michael’s sister, feelings that ultimately go nowhere.

Arguably, it could be said that Michael’s children are the leads of this film. Literally, they’re leading the way and Mary Poppins is following behind them. At the beginning, they proclaim that they don’t need a nanny, let alone Mary Poppins, and the movie doesn’t do much to criticize that. The children are so precocious and unlike in the 1964 version, there isn’t really an arc for the children. It’s not as if they’re devoid of the ability to play and imagine and have fun. Mary Poppins shows them magic, which is impossible in order to get them to believe in the impossible. Yet, that’s just a movie issue not one that has any weight beyond the frame. The movie tries to be about the children dealing with their mother’s death. Mary Poppins could be a manifestation of that loss, but the movie never truly bridges that gap. 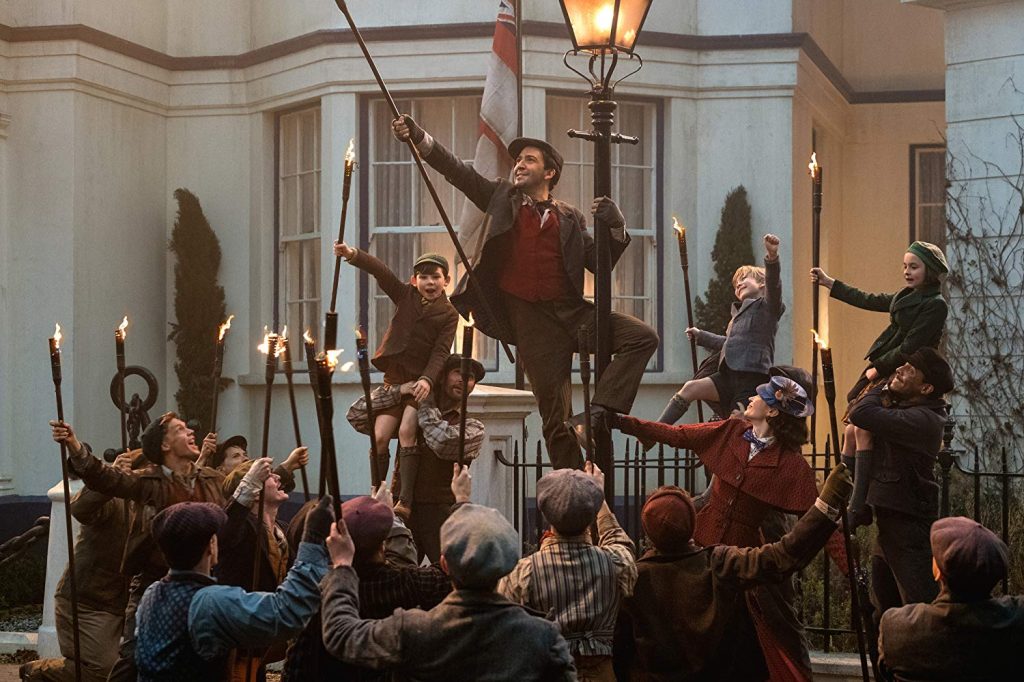 That being said, there is a song here called “The Place Where Lost Things Go.” That song is essentially a very sweet lullaby, which addresses in a poignant way the death of the children’s mother and how one copes with the loss. It’s probably the best song in the whole movie. The other songs in general are fine, but they’re the typical show-tunes that you find in musicals, such as this or on Broadway. The choreography is very much like what you’d find on Broadway. The aforementioned song, performed by Miranda, called “Trip a Little Light Fantastic” is choreographed as if on a Broadway stage. The parallel song in the 1964 film, again called “Step in Time,” was choreographed in a more unique and bolder way with the dancers on top of roofs and chimneys with more magical moves that couldn’t have been done live on a stage. The choreography here is less than magical.

This is not to say that there isn’t magic in this movie. There’s the obvious magic with flying kites that fly themselves and Mary Poppins slowly descending or ascending using her umbrella. However, there are some other magical moments, such as the bathtub scene, which is the first really impressive scene in the film. It’s also the moment that kicks the movie into gear and gets things going. Prior to that, there are some good acting moments, particularly with Whishaw and his character’s plight, but the bathtub scene is the film’s first moment of real brightness and even splashy color. The movie incorporates animation and animated characters just as the 1964 version did. This one probably has more fun with that concept than the previous, though the animation is practically the same style. There’s also an under-water sequence here that set the stage for Aquaman, which opens the same week as this. 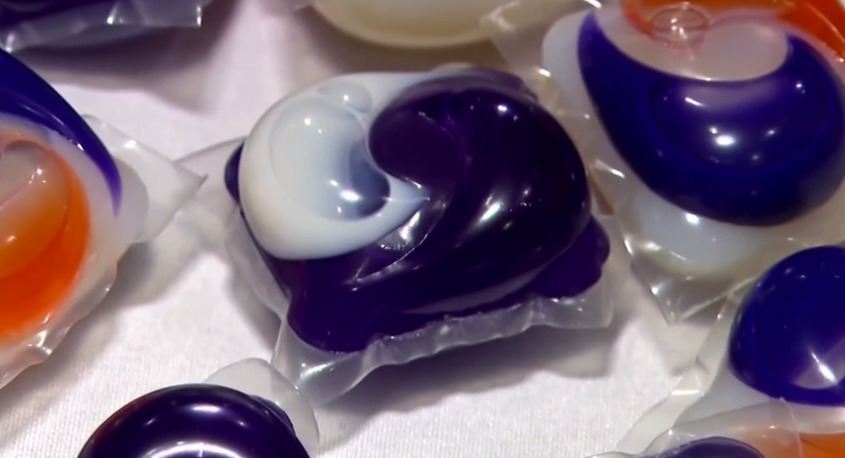 Detergent pods are tiny, convenient and toxic, and parents want[...] 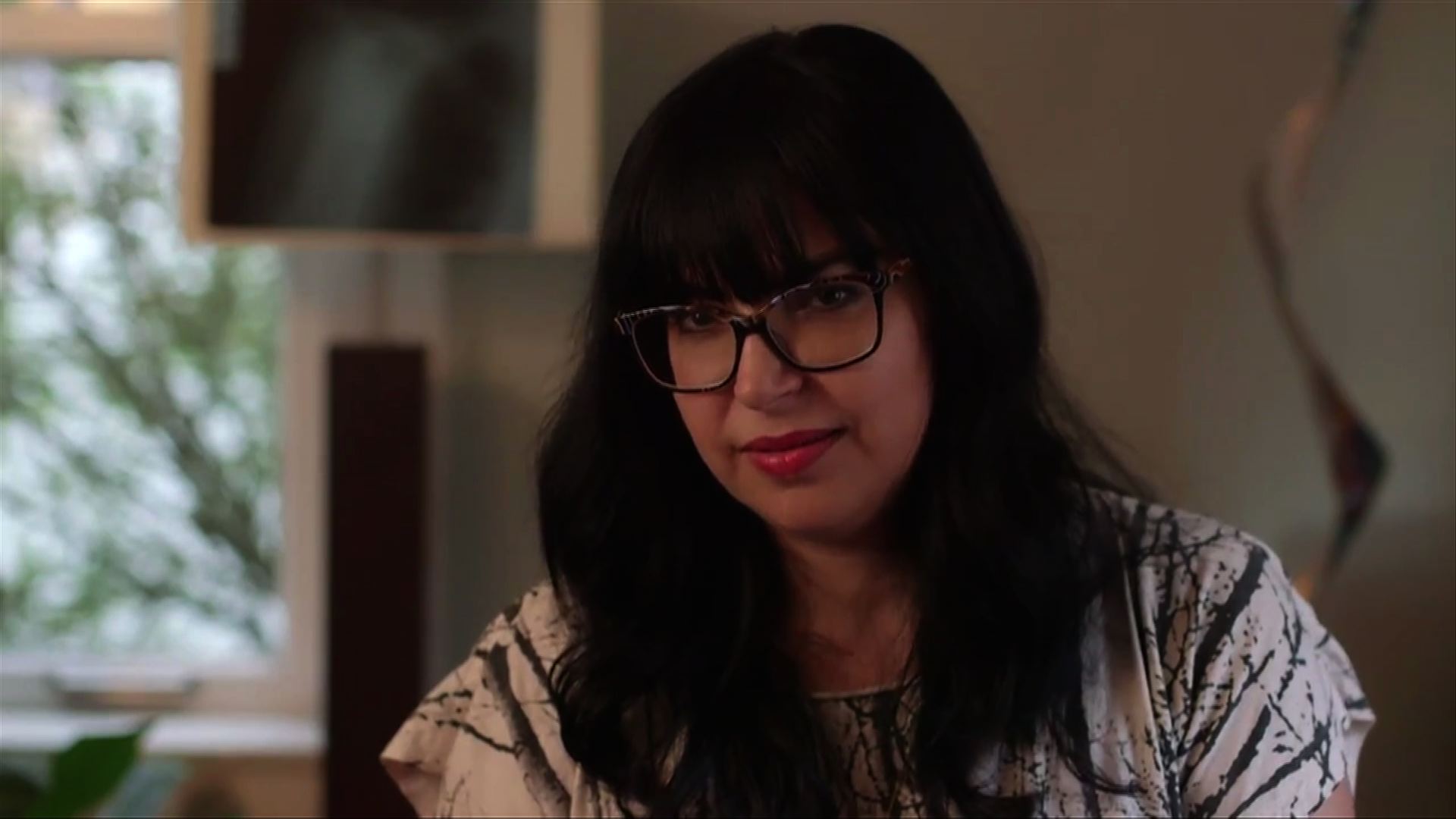