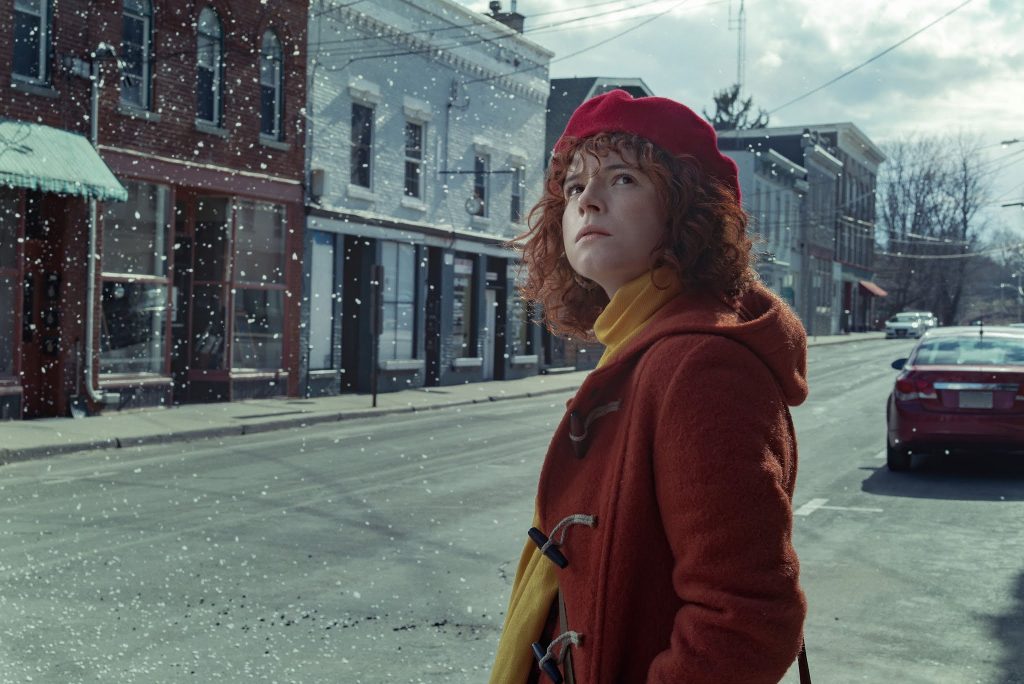 Writer-director Charlie Kaufman adapts Iain Reid’s 2016 novel. This is the third feature with Kaufman as director. It’s his eighth as screenwriter. His earlier scripts were more fun and humorous, more comical. His recent scripts have been less so. Even though there is humor here and there, his most recent films have had an overall depressing tone. His last film Anomalisa (2015), which was more of a romance, still had more of a somber and melancholic tone. This film continues that melancholy. His film is like most of his others in that it’s postmodern and hyperrealistic where fantasy and reality are blurred. This is mainly because his films are about the interior of a person’s head, their thoughts and feelings, examining that interior almost with a microscope. This film is no different, as it’s structured using voice-over narration from the protagonist, as it becomes a running commentary practically from beginning to end, whispered as if it were a Terrence Malick film.

Kaufman shoots the film in 4:3 aspect ratio, which is more square. It boxes in the image in a way that could almost be seen as boxing in the characters. The protagonist in fact feels boxed in or trapped to some degree. The aspect ratio could be reflective of that feeling. The aspect ratio could also make the film feel more intimate, as it brings the audience into the image more. Since we’re supposed to be in the interior of the protagonist, feeling more intimate or more inside her head is what Kaufman also clearly is aiming. It also helps to focus the audience’s eye to certain details in the frame and there are certain visual details that Kaufman wants to draw the eye that one might miss through the narration, which has a lot of verbosity. 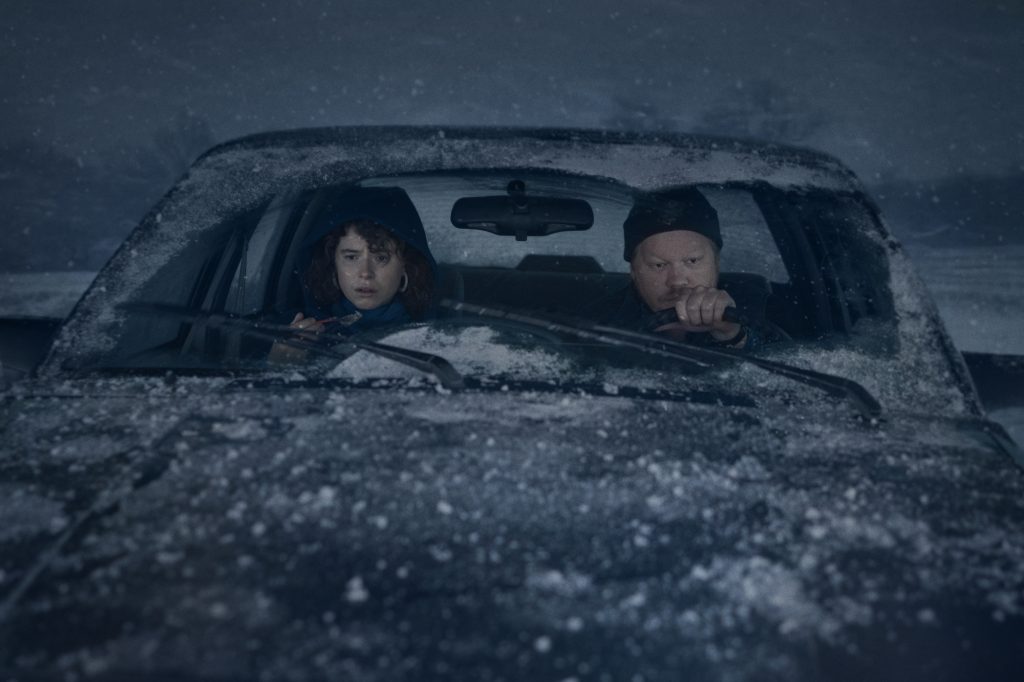 Jessie Buckley (Judy and Wild Rose) stars as an unnamed, young woman living somewhere in some city. She’s going on a road trip, someplace in the country with her boyfriend. She’s only been dating him for six weeks or about two months. It’s cold and it’s snowing. She’s stuck in a car with him for what seems like hours. While she’s sitting for the drive, her thoughts are about how she actually wants to break up with him. It’s not sure if he senses this, but he keeps engaging in conversation with her, despite her being distant. She does realize, as she seemed already to know, that her boyfriend is an interesting person. She, therefore, has to decide if she really is going to break up with him or if she’ll change her mind.

Jesse Plemons (Breaking Bad and Friday Night Lights) co-stars as Jake, the boyfriend in question. It’s revealed that he’s very smart. He references poets like William Wordsworth. He’s curious about art and science, particularly arts and sciences about which his girlfriend is curious. He even can quote musical theater like Oklahoma!. When he gets to his parents’ house, it’s revealed that he is a country boy, raised on a farm, which means that he can be rough and a little socially awkward. He can be quiet, reserved and a bit shy, while at the same time rigid and harsh about certain things, especially with certain social graces. 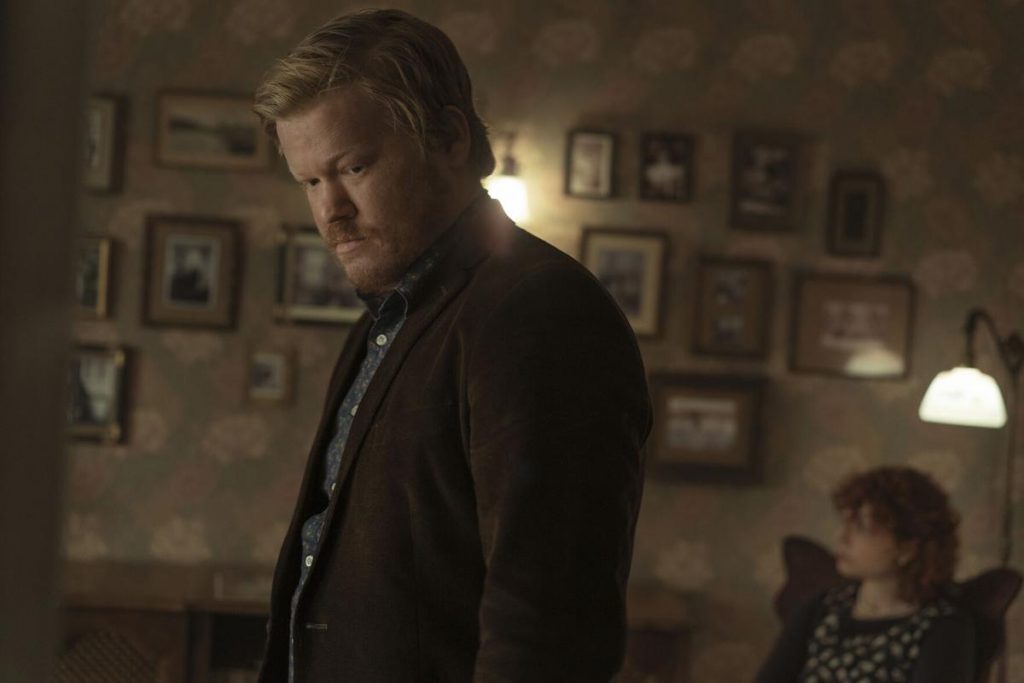 Given some context clues, and having not read Reid’s book, I thought it was going to be revealed at the end that Jake is secretly gay. Some of the revelations that are in the book aren’t made explicit here, but the context clues that are in this film point to the book’s revelations. However, I interpreted those clues as being that Jake was gay. Those clues include Jake being triggered when his girlfriend says the word “sissy,” which is a derogatory term for gay men. Later, Jake is upset about his girlfriend making a negative implication about being homosexual. His girlfriend points to a picture of him as a little child and remarks that it looks like a little girl. Stereotypically, he’s into musicals and is more socially withdrawn, as if he is hiding his sexuality. When Jake and his girlfriend stop to get ice cream, he seems to be put off by the girls there who tease him by saying “two sames,” meaning two of the same, which could be a veiled reference to same-sex attraction or being gay.

While the film could be seen as an exploration of gender identity, particularly in regards to a person’s relationships, it ends up being about something else. That scene where Jake is teased as “two sames” is more of a literal clue as to what’s happening, which is more explicit in Reid’s book. Yet, Kaufman keeps it mysterious and ambiguous as to what’s really going on. Based on the clues though, one could also reason this film is about sexism and a woman standing up for herself. There are several context clues that point to that. The culmination of which is a debate between Jake and his girlfriend about the song “Baby, It’s Cold Outside.” She comments that women often feel pressure to go along with whatever a man says or wants. Jake’s girlfriend going along on this trip is proof of that. The fact that the name of Jake’s girlfriend or her occupation is never nailed down also seems to be proof of women’s subservience to men.

Toni Collette (Hereditary and The Sixth Sense) plays the mother to Jake. She certainly brings a great deal of levity and quirkiness. She’s an oddball character who fusses over her son, suffers from tinnitis and has a skewed sense of humor, which often results in a hysterical laugh. David Thewlis (Fargo and Harry Potter and the Prisoner of Azkaban) plays the father to Jake. He’s mainly there as comic relief too. They exist here if only to indicate what might be strong factors in Jake’s personality and why he might not be as social.

The film ends with a question mark about the fate of Jake and his girlfriend. There are in fact two possibilities. One possibility is lonely and sad. The other possibility is happy and successful. It throws into question the identity of Jake as it stands now and who his identity will be in the future. One of the best lines of dialogue to how this film deals with identity is when Jake’s girlfriend says, “It’s tragic how few people possess their souls before they die. Nothing is more rare in any man, says Emerson, than an act of his own. And it’s quite true. Most people are other people. Their thoughts are someone else’s opinions, their lives a mimicry, their passions a quotation. That’s an Oscar Wilde quote.” It leads to how this film makes the point that identity often times takes from others or we perhaps hide who we really are.

The film is topped with an interpretative dance number featuring Ryan Steele, an accomplished dancer. Steele has been on Broadway. If you haven’t seen the film Five Dances (2013), Steele shows his great dancing skills there. There’s obviously something meta about the dance. Firstly, the dance takes place in the hallways and gymnasium of a school, presumably the high school where Jake attended. At first, it seems like it’s choreography for the musical Oklahoma!, which Jake had referenced earlier. However, it then appears as though the dancing is representative of Jake and his girlfriend’s relationship. Given where this film starts and what it does for the majority of the runtime, culminating in a dance number is not where I expected it to go, which is probably a good summation for Kaufman’s work here.

Rated R for language, including some sexual references.
Running Time: 2 hrs. and 14 mins. 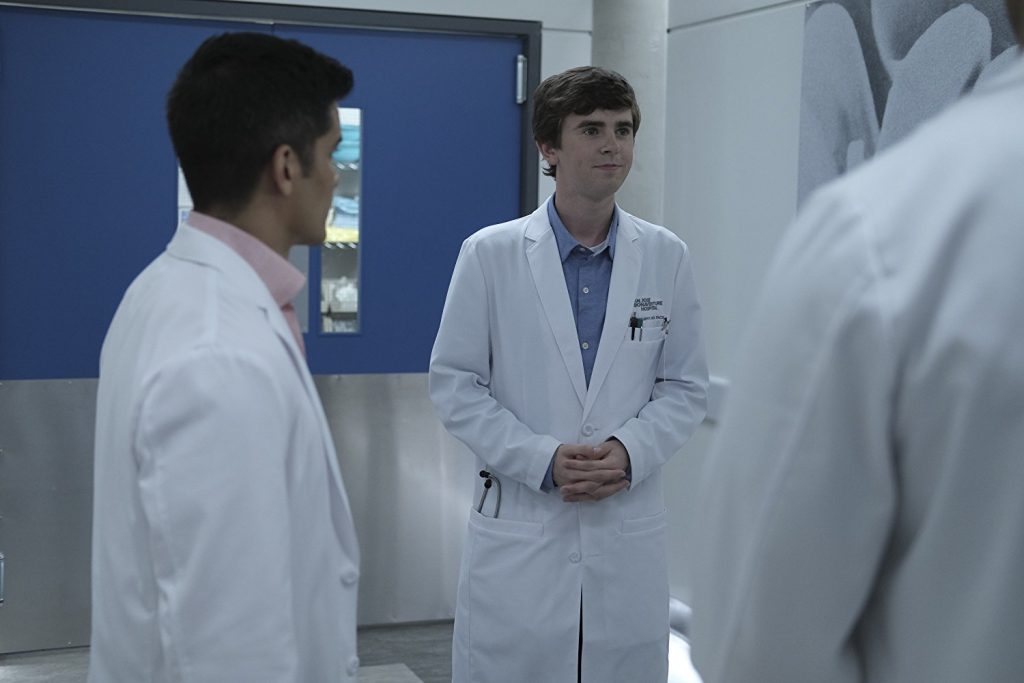 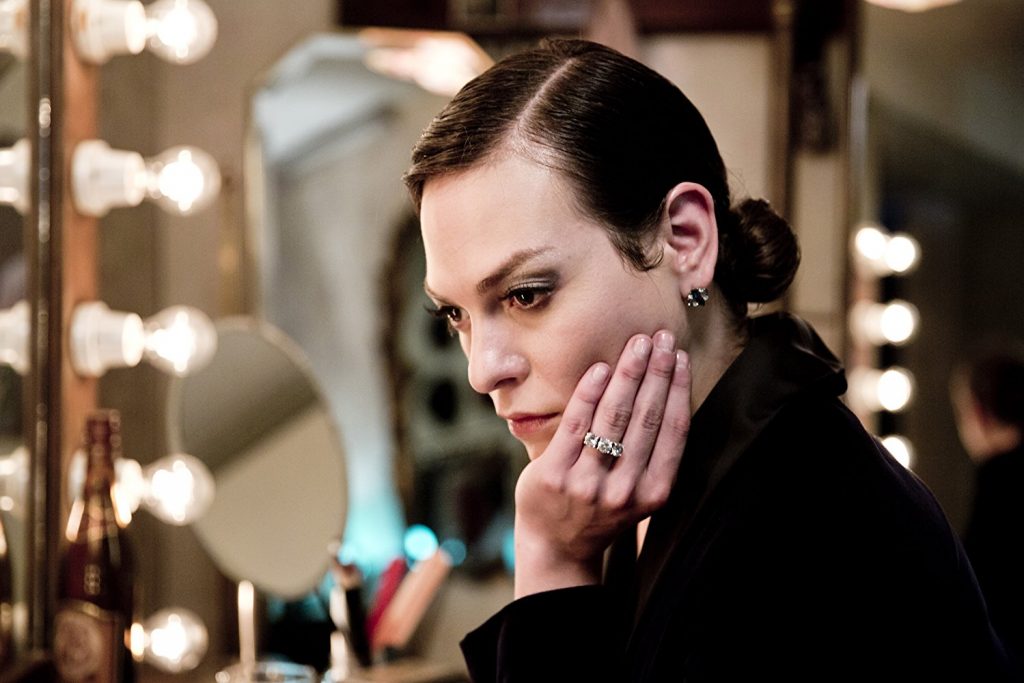