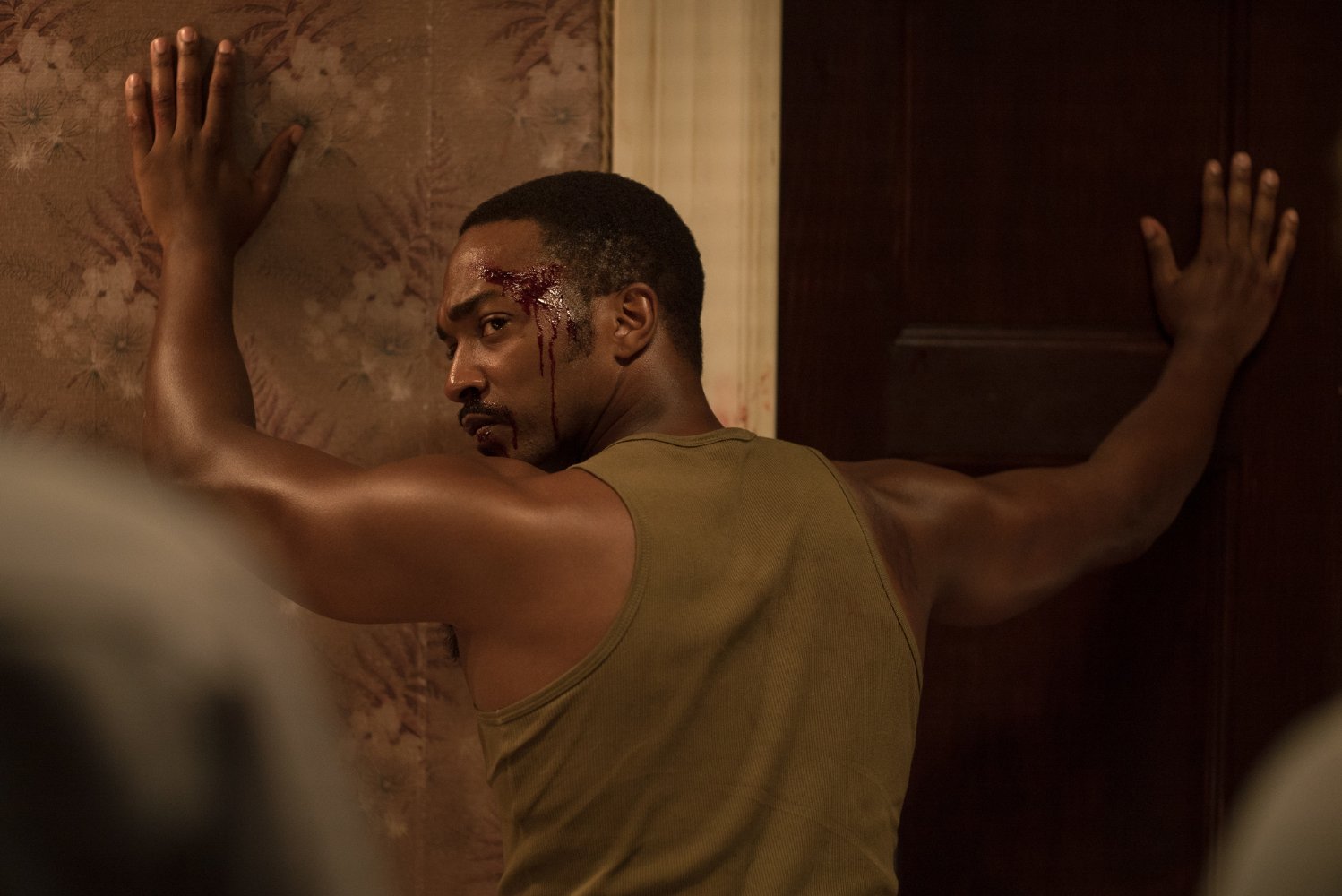 Director Kathryn Bigelow won the Oscar for Best Director at the 82nd Academy Awards, making her the first and only female director to do so. Her film The Hurt Locker (2008) was about the War in Iraq. Her follow-up was Zero Dark Thirty (2012), a film about the war on terror and the capture of Osama Bin Laden, but it drew controversy for appearing to be pro-torture. This film is her follow-up to that controversy and in many ways feels like a redress of that controversy. Like her 2012, Oscar-nominated film, Bigelow is also continuing in her mode of docudrama, telling true stories or recounting real-life incidents in a fictionalized way. This time, she’s diving into a different kind of war. She’s diving into the Civil Rights Movement of the 1960’s and recreating a moment that many might feel reverberates to the current Black Lives Matter movement.

The film premiered on July 25 in Detroit. That day marked the 50th anniversary of the 1967 Detroit riot. This was one in a series of riots that broke out around the country at that time. The riots were often spurred by incidents between African-Americans and the police. A lot of these incidents and riots were racially motivated, so it’s no surprise that the bulk of these riots took place around the time of the Civil Rights Act of 1964 and 1968. However, Bigelow and her Oscar-winning screenwriter Mark Boal center on what’s known as the Algiers Motel incident. It was a police raid about a mile east of where the bulk of the Detroit riot occurred. It was there that three, unarmed, black teenagers were shot and killed by police and nine others were tortured and beaten.

Here, the preferred method of torture is pointing a gun at someone’s head and playing a perverse reindeer game. Yet, the implication is that it ultimately doesn’t work as a means of getting information, especially if it’s information confirming one’s own assumption or bias, in this case the obvious racism of the white police officers, thus making the white officers the instigators or villains. It’s less about patriotism around which more people can rally, particularly in the face of September 11. It’s more about personal prejudices. This is exemplified in Will Poulter (The Maze Runner and The Revenant) who plays Phillip Krauss, the white officer who becomes the ringleader and who states his actual bias pretty early on, as he perceives all black men as criminals, worthy of being shot regardless.

A day or so before arriving at the Algiers Motel, Phillip is seen shooting a potential looter carrying groceries. Phillip shoots the unarmed black man in the back as he’s running away. It’s reminiscent of the shooting of Walter Scott in South Carolina by Michael Slager of the North Charleston Police Department in 2015. Video of which was captured and it became a landmark in the Black Lives Matter movement. 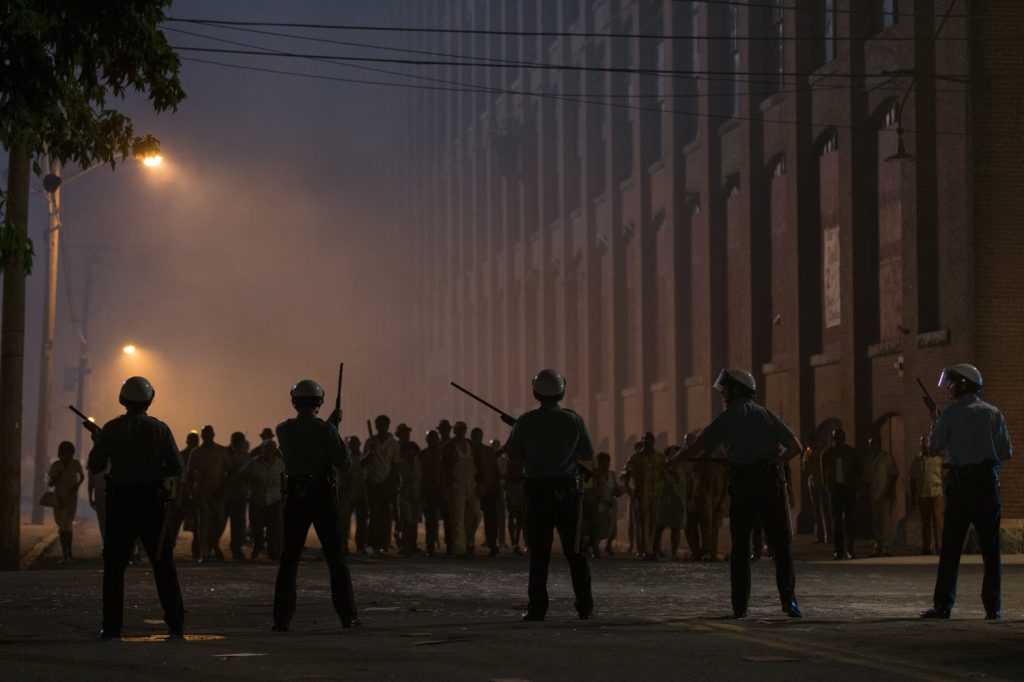 In legal proceedings regarding cases connected to Black Lives Matter, police officers argue self-defense or being in fear of their lives. Nothing underscores the hypocrisy of that more than the shooting of someone who is unarmed and literally running away from you. It does underscore the racial bias and in this film the racial hatred that was ever present in the 60’s and survives in remnants in these Black Lives Matter cases.

It’s not to say the police had no reason to go to the Algiers Motel. They were responding to the sound of gunshots. Their responses simply went too far, way too far and acted aggressively, way too aggressively. Phillip and the other police officers wanted to know where the gunshots came from. Phillip and the other cops rounded up the group who was in the motel’s annex, which was a three-story house and proceeded to torture them in order to get them to say where the guns were. There were no guns, so the group couldn’t give something they didn’t have, which only made Phillip more strident.

When it comes to the torture here, Bigelow makes us stew in it for a lot longer than she did in Zero Dark Thirty and mainly we’re experiencing it through the prisoner’s point-of-view. In Zero Dark Thirty, it was mainly from the captor’s point-of-view. This is obvious because we’re meant to identify with the captor’s in that 2012 film. Not so here! Bigelow is more balanced here, as she instead provides some perspective from the other side.

Various police officers, including troopers from the Michigan State Police and guardsmen from the Michigan Army National Guard were present at the scene of the Algiers Motel. Many of whom left after the torture started and feigned ignorance to absolve themselves. One guardsman was on hand or was nearby, but the majority of the incident comes down to three, white officers with the Detroit Police Department.

The fictionalized Phillip Krauss was the ringleader. Of the three, unarmed, black teens who were shot and killed, only one’s murder can be directly tied to one of those Detroit police officers. That officer is given the similarly fictionalized name of Demens, played by Jack Reynor (Transformers: Age of Extinction). Demens almost comes across as a SS officer claiming to have been only following orders. Reynor is a good choice though because his performance after a while reminded me of his performance in What Richard Did (2013), a film about guilt regarding one man’s deadly actions.

Guilt, however, isn’t the overriding emotion here. The overriding emotion appears to be anxiety, perpetual nervousness. It’s conveyed certainly through Bigelow’s shaky camerawork, which she established as her style back in The Hurt Locker, but it’s definitely immersive. It helps you to feel the immediacy and urgency of the situation. I felt more immersed here than I did in Dunkirk.

John Boyega (Star Wars: The Force Awakens) co-stars as Melvin Dismukes, a black security guard working at a grocery store not far from the Algiers Motel who goes and stands beside the terrorizing police officers. He sees what Phillip and the others are doing, but he’s rather complicit. He’s at one point called “an Uncle Tom.” It’s not until later when the tables are turned on him does he then see the injustice that went down. 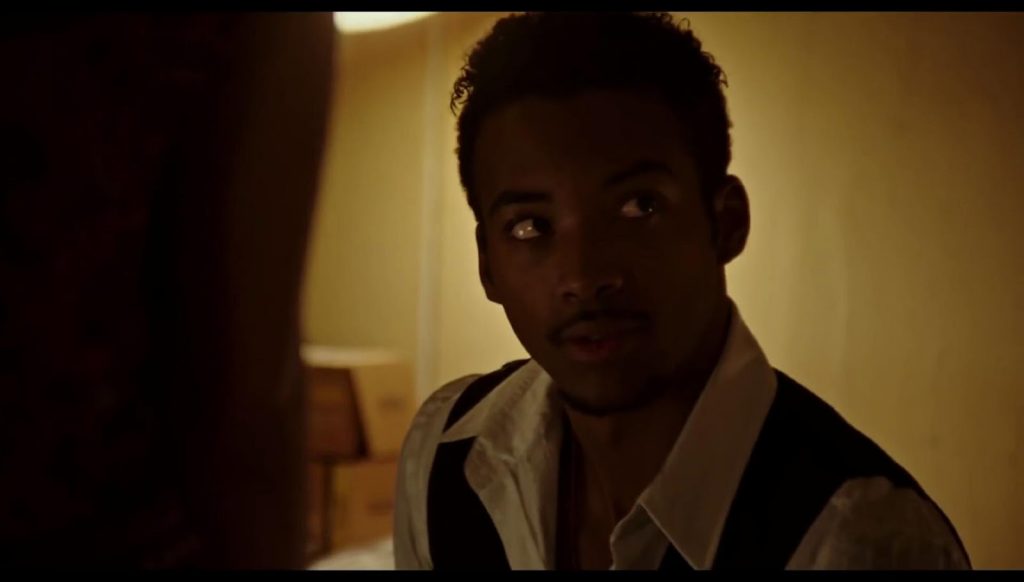 Algee Smith (pictured above) who recently played R&B singer Ralph Tresvant in the BET series The New Edition Story turns around and plays R&B singer Larry Reed, the founding member of The Dramatics. He becomes one of the victims in the motel annex. Through him, we get a feeling of the hope and dreams that can be dashed and the legacy of relations between the police and the black community. There was an expression from one of the dead teens, Carl Cooper, played by Jason Mitchell (Straight Outta Compton), where he underlines to the white women in the film and even to Larry what it’s like to be black, but it’s through Larry that we feel the long-term effects of being black in this country.

Other than “The Promise” by Chris Cornell, the song created for this film is one that should be offered up for Best Original Song at the 90th Academy Awards. It’s called “It Ain’t Fair” by The Roots featuring Bilal and Algee Smith, and it’s a terrific piece of music. 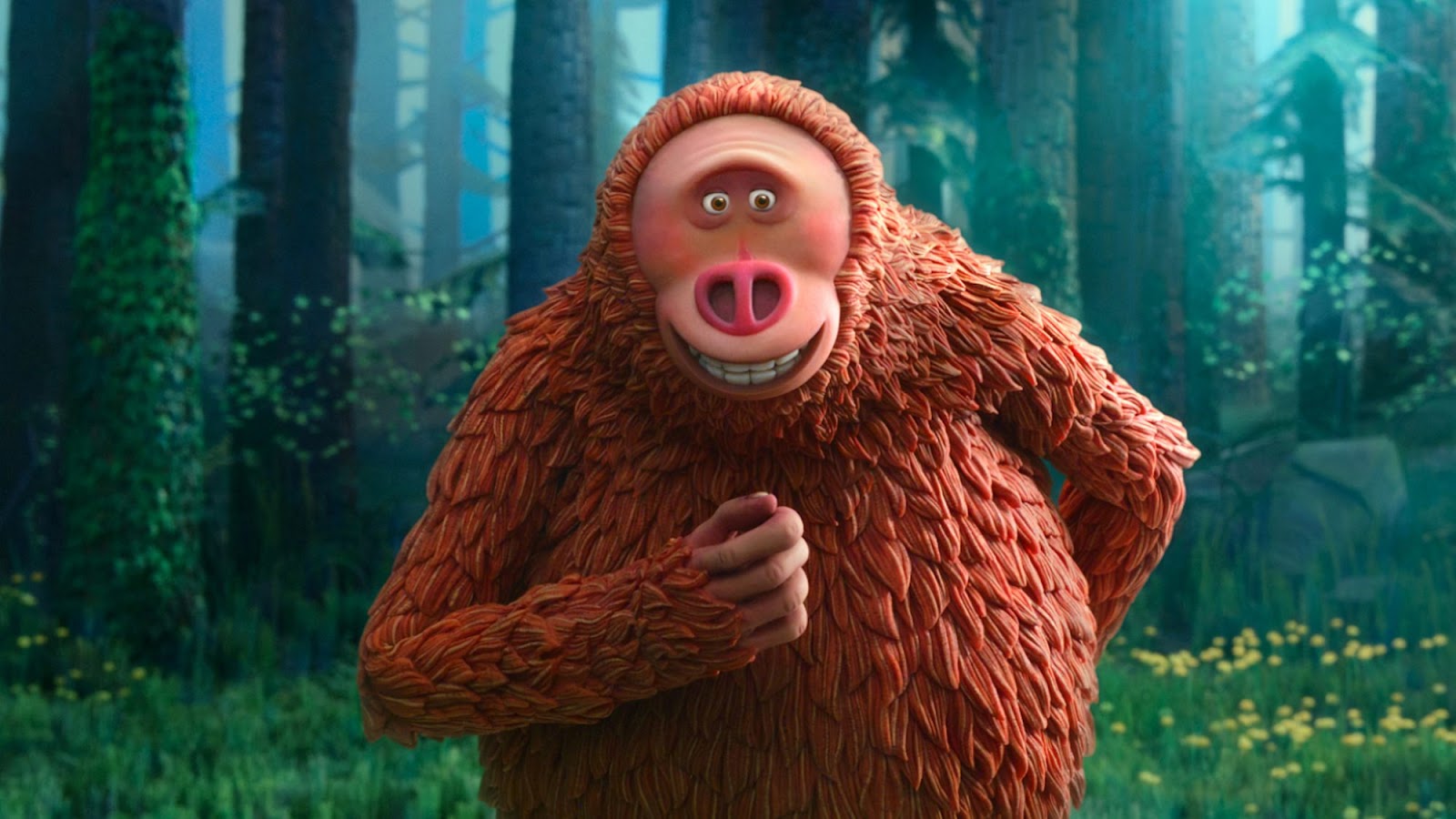 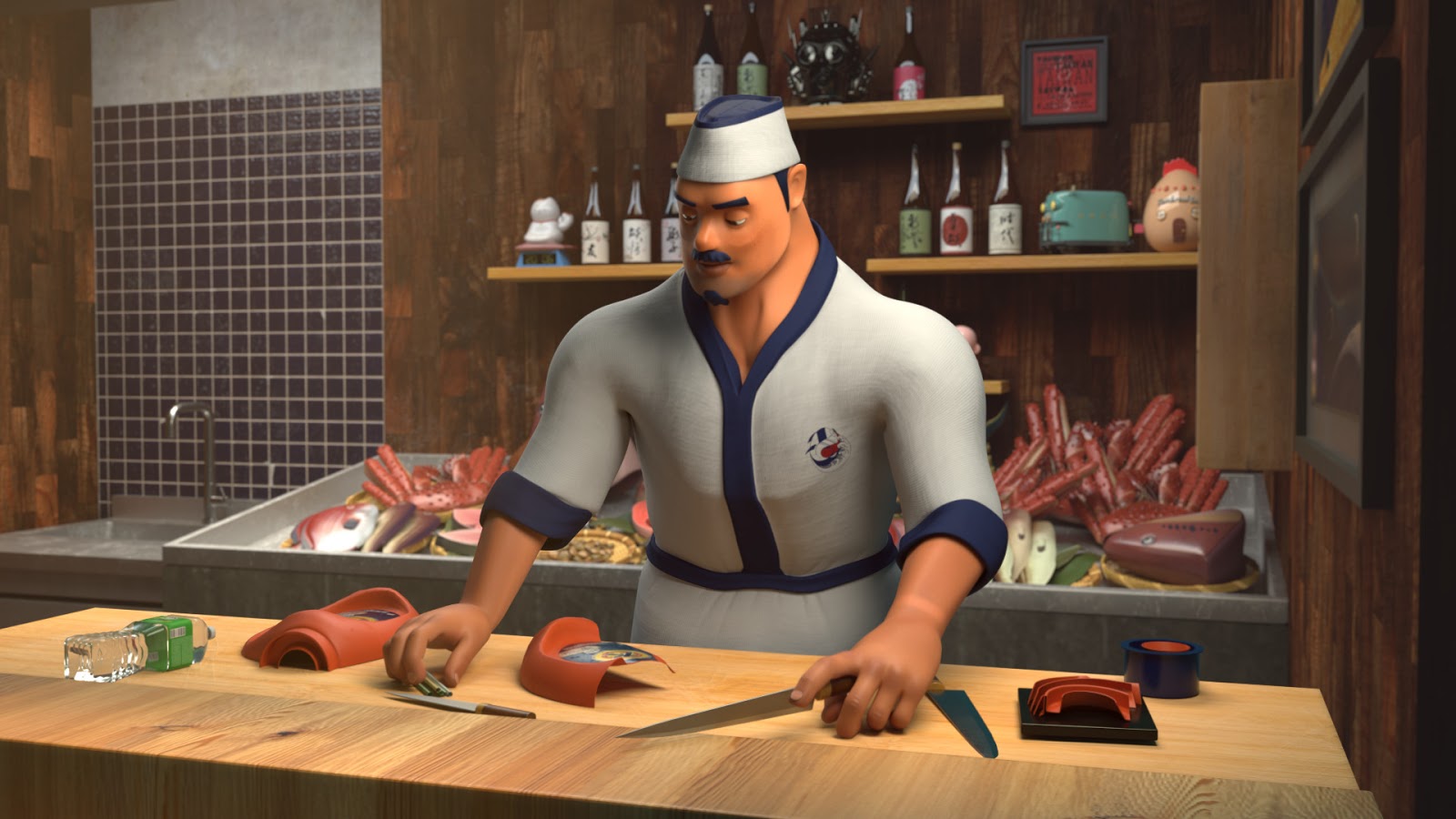 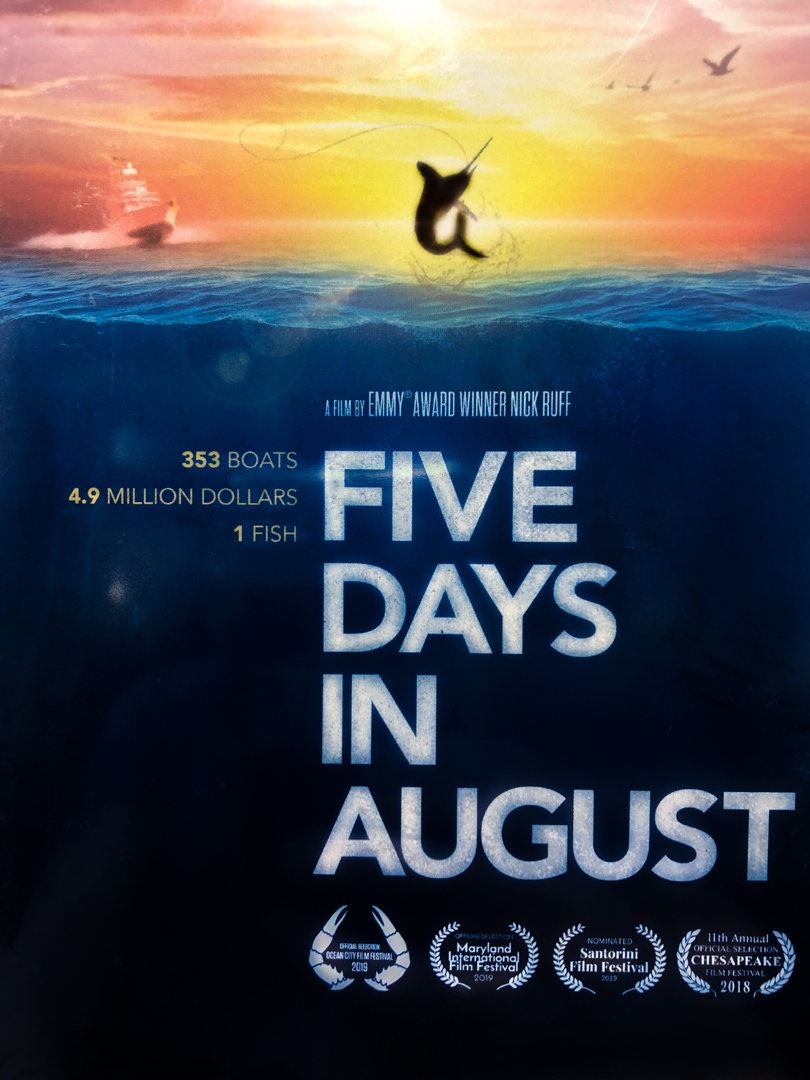