A shout-out to Cinderella (1950) occurs late in this movie, but it’s a rather apt comparison. A girl from no wealth has a handsome prince fall in love with her. It’s a fairy tale that’s meant to show that a person’s worth isn’t based on where they come from or what they have. It’s also a rebuke of classism and the idea that one person isn’t better than another because of how much money or their social status. This is of course a lesson in a lot of fairy tales, including another Disney film, that of Aladdin (1992). In that story, a princess pretends to be a poor girl, which leads her to meet her love interest. Here, a similar thing happens, though the deception over the wealthy person not being wealthy is dispatched rather quickly. In all of those stories, there’s always a through-line of inadequacy or a person feeling as if he or she isn’t enough without wealth. However, there was an interesting take in Aladdin in that Princess Jasmine felt she wasn’t enough with all that wealth and that her wealth was in fact a cage that trapped her.

Henry Golding in his feature debut co-stars as Nick Young. He’s the Princess Jasmine-equivalent here. He expresses similar feelings in wanting to be loved not because of his wealth but for himself, so he ran away like Princess Jasmine and basically pretended to be poorer than he actually was. It’s never stated exactly how Nick’s family got its fortune, except that it’s old money from China, which they used to develop a lot of properties and businesses in Singapore and worldwide, so Nick might as well come from royalty and he might as well be Prince Harry.

Jasmine ran away, but even she knew that she would one day have to return to her father, the king, and the palace, but, in this movie, Nick doesn’t have to return. He doesn’t have to go back to the palace as it were or his family’s mansion in Singapore. Nick can stay in New York City where he escaped to study and work. He was pressured to go back and take over the family business a year prior to this movie’s start but he didn’t. 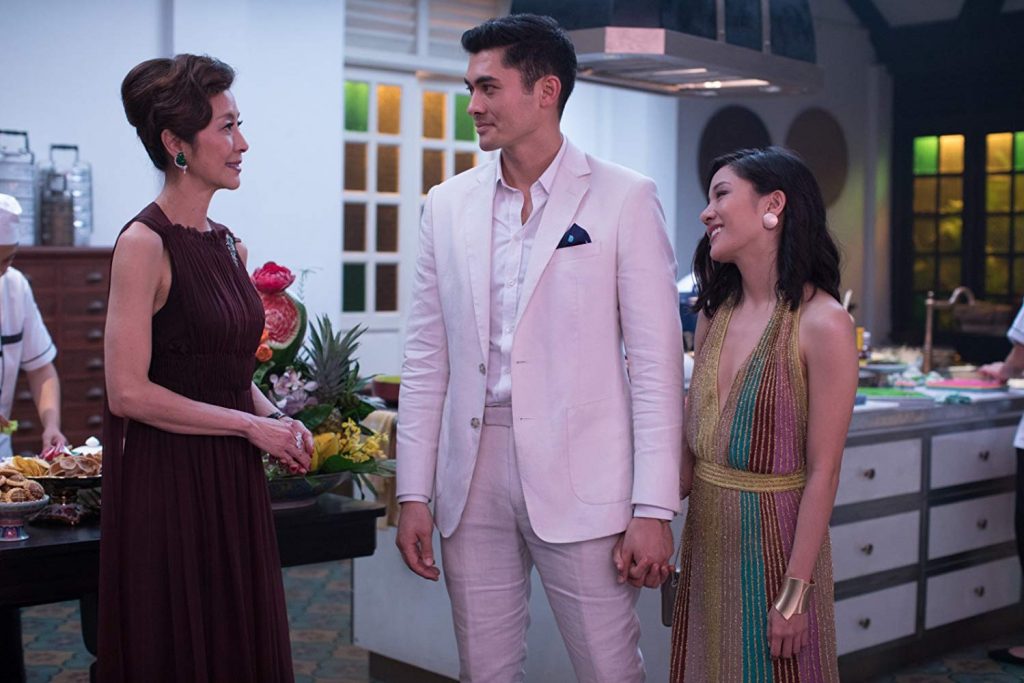 Constance Wu (Fresh Off the Boat and Eastsiders) stars as Rachel Chu, an economics professor at New York University. She knew Nick in college and probably graduated with him. She now has this really great job and it’s been a year since she started dating Nick. She thought he was like her, a child of an immigrant working hard to make a better life in America. When Nick invites her to his cousin’s wedding and to meet his family, she discovers how wealthy he really is, as she’s whisked into the lap of luxury. The question of whether or not she’ll remain there is an essential one that unfortunately the film never answers.

A story about a poor girl being taken by a rich man is certainly not new. It’s probably common, if not hackneyed. We saw it with Audrey Hepburn in My Fair Lady (1964). We saw it again with Julia Roberts in Pretty Woman (1990). We saw it recently with Fifty Shades of Grey (2015). Often times, these stories are about the girl or lady needing rescue. Other times, it’s the girl having to adjust her lifestyle, which mainly means fending off the snobbery or prejudice of others.

Michelle Yeoh (Crouching Tiger, Hidden Dragon and Tomorrow Never Dies) also co-stars as Eleanor Young, the mother to Nick. When it comes to prejudice, she has plenty to give. It’s ironic, given the prejudice she faced, specifically the racism against Chinese people. It’s interesting to see that a lot of what Eleanor does is the result of what happened to her, particularly in how she treats her potential daughter-in-law.

Eleanor also has an old-world idea about a woman’s role, which isn’t supported in the film because we never see her husband, but she keeps insisting that pursuing personal happiness is a negative to putting family first. Nick separated from his family and his mother wants him back. She insists family first as a subtle pressure to get Nick to stay. It’s also a way for Eleanor to distinguish her and her family from Rachel. Even though Rachel is the daughter of a Chinese immigrant, she doesn’t think of Rachel as Chinese. Rachel is considered a “banana,” yellow on the outside and white on the inside. It also leads her anti-American sentiment and the anti-American sentiment in general present in this film.

There are a lot of jokes made against Americans or American lifestyle, which in itself isn’t a problem. What’s problematic is that the jokes are off base. One constant joke is Americans being skinny. Both Nick and Rachel are commented as being skinny because they come from America. This is off base because Americans aren’t known for being skinny. Americans have an obesity issue. Former First Lady Michelle Obama made obesity the target of her time in the White House because it’s such an issue, especially childhood obesity, so those skinny American jokes don’t make sense or fall flat.

Other jokes against Americans again suggest they don’t put family first. According to this film, for example, Americans don’t care about the elderly and don’t care about traditions. Obviously, these are jokes based on generalizations that can be reasonably defended but they still feel so disconnected from the reality of so many Americans. It’s fine to be proud of one’s own race or ethnicity, but not to the denigration of another, which is something that Eleanor is shown.

Along the way, director Jon M. Chu (Now You See Me 2 and G. I. Joe: Retaliation), adapting the novel by Kevin Kwan, revels in all the wealth and opulence of Nick’s family. We’re introduced to Nick’s family. I dare say that we don’t learn that much about them. Eleanor leads a Bible group. She knows how to make dumplings and how to play Mahjong. She also runs the mansion or the huge estate of the family. She seems to be a very conservative woman. Yet, besides her, there’s only one other family member with whom we spend significant time.

Gemma Chan (Humans) plays Astrid Young, the fashionista based in Shanghai who’s married to Michael Teo, played by Pierre Png. Michael was an army captain. Her relationship with Michael seems solid. They have a child together, but Astrid worries that Michael can’t handle the fact that she’s rich and powerful and he isn’t. She tries not to make him feel inadequate by her wealth, which might be ironically making him feel inadequate. Her relationship gets significant time, but more time could have been devoted to exploring the dynamics of that relationship.

Screenwriters Peter Chiarelli and Adele Lim probably felt the need to introduce as many of the family members as possible. Some members like Nick’s aunts are meant to be colorful background or brief comic relief, spicing up scenes here and there, and filling out the world here. However, the writers introduce other characters along side Astrid that add more color and comedy but distract from Astrid’s story or the main story.

If nothing else, this movie firmly establishes Awkwafina (Ocean’s 8 and Neighbors 2: Sorority Rising) as the Asian Tiffany Haddish. It also establishes Nico Santos (Superstore) as another strong comedic presence, akin to Alec Mapa. It also establishes Asian males as the sex symbols that they can be, are and always have been. Golding of course leads the pack, but he’s joined here by a lot of others, including Chris Pang as Colin Khoo, the groom getting married in this film. 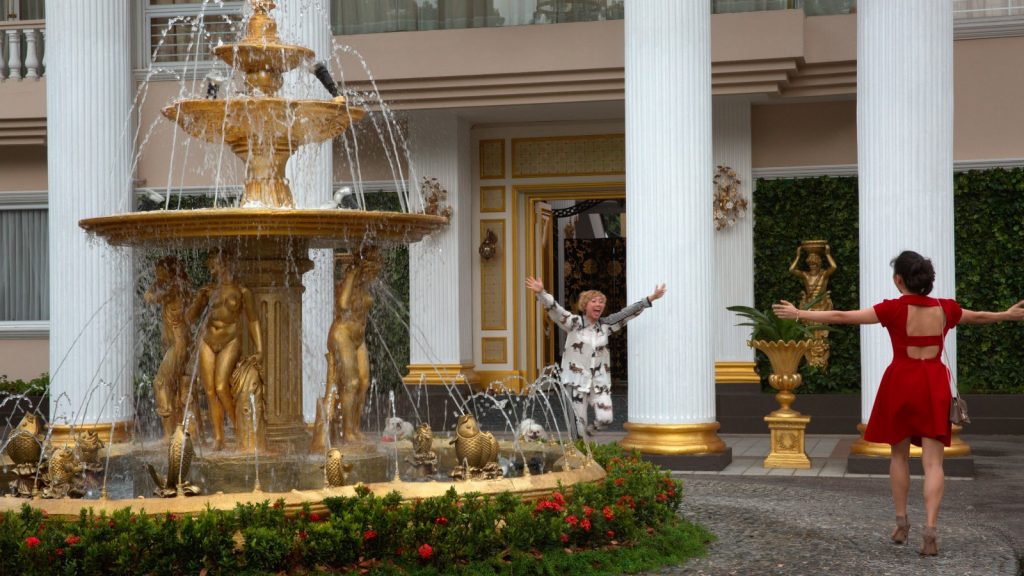 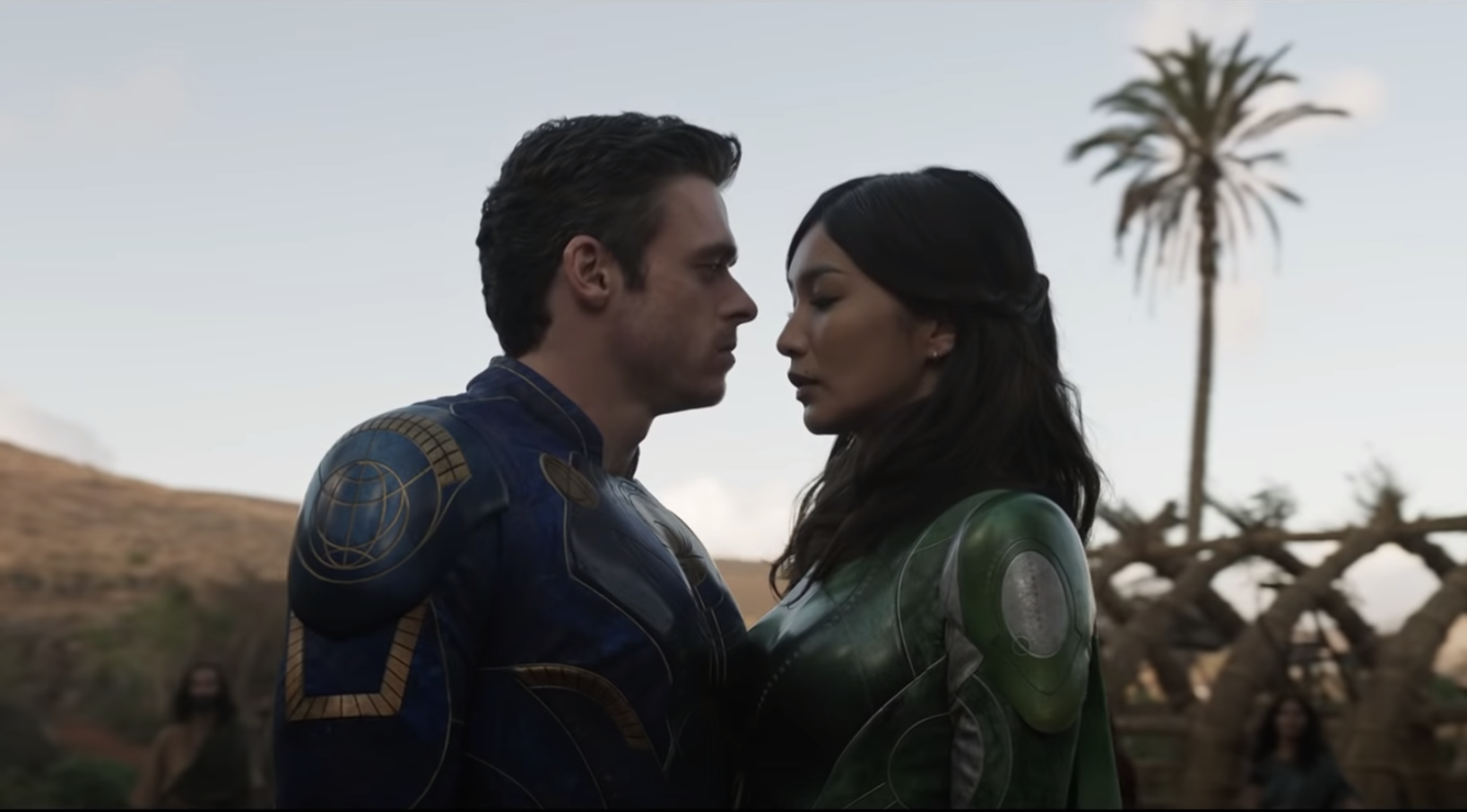 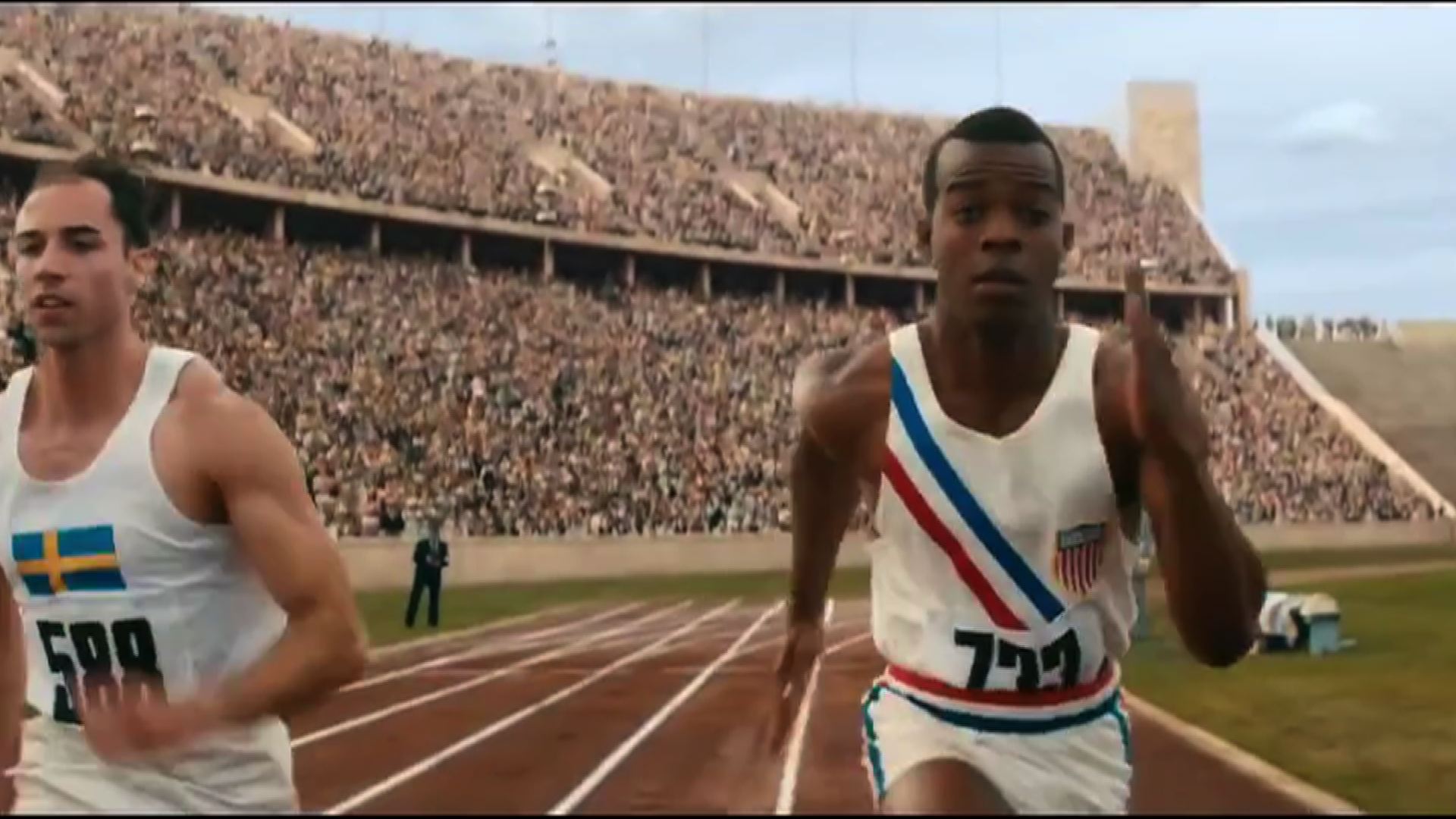 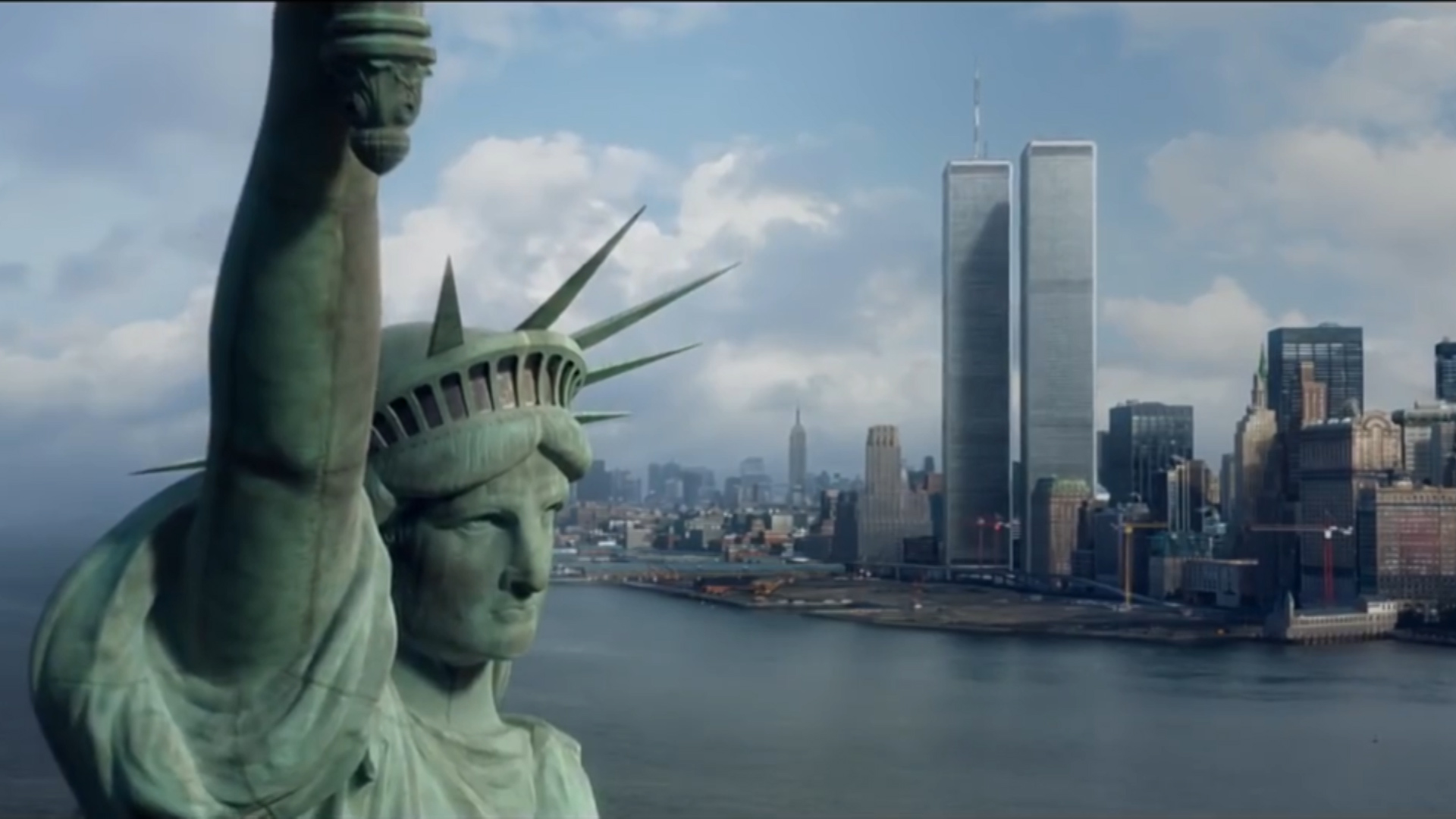