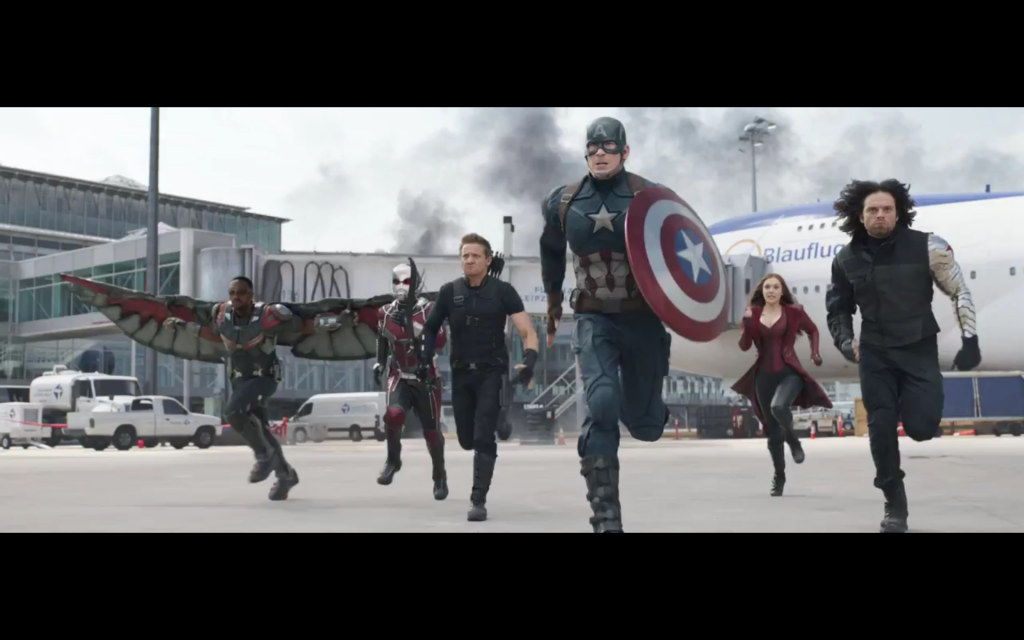 The obvious comparison is to Batman V Superman: Dawn of Justice, which came out a month and a half ago. This movie has the same, basic premise. Two super heroes go toe-to-toe due to ideological differences but also due to the maniacal machinations of a third party, putting into question the very idea of super heroes and what their relationship to the world should be. Unfortunately, this movie has an unfair advantage in that it arguably has nearly a decade of successful, Marvel Studios films to build upon. Batman V Superman only had one, giving it a harder and larger hill to climb. Yet, even if this movie didn’t have that advantage, it could still stand alone as a far better adventure and narrative than the Zack Snyder mess.

It’s insane how many plot points are the same here as to Batman V Superman. It’s almost a beat-for-beat copy. Both movies open with a flashback, depicting a crucial murder. Both movies in the first act depict a super hero battle that results in the loss of innocent civilians. Both depict the media and public backlash against said super heroes. Both depict the introduction of an exotic, new super hero from a foreign land. Both depict in the final act, an evil villain concocting a convoluted plan to turn the heroes against each other.

The key difference between the Snyder offering and this one, directed by Anthony and Joe Russo, is that each depiction here felt genuine and believable. The events, the people and the motivations behind each made sense. I bought everything that happened. I accepted it. Any questions or inconsistencies were addressed. There weren’t that many loopholes, or if so, they were small. Nobody did anything that seemed dumb or stupid or even all that ridiculous, which is something that can’t be said about Snyder’s film. The Russo brothers made a smart film. Snyder did not.

The Russo brothers also made a fun film. Snyder did not. This did not have to do with the fact that Snyder’s film is darker and deals with heavy themes in a heavier way. Christopher Nolan proved that a film can be dark yet still fun. It just didn’t seem like there was any enthusiasm to any of Snyder’s action sequences. It was all just so depressing. Not the case here! The Russo brothers always keep their action scenes upbeat and lively, always inventive and cool in the vein of the recent Mission: Impossible films with Tom Cruise. 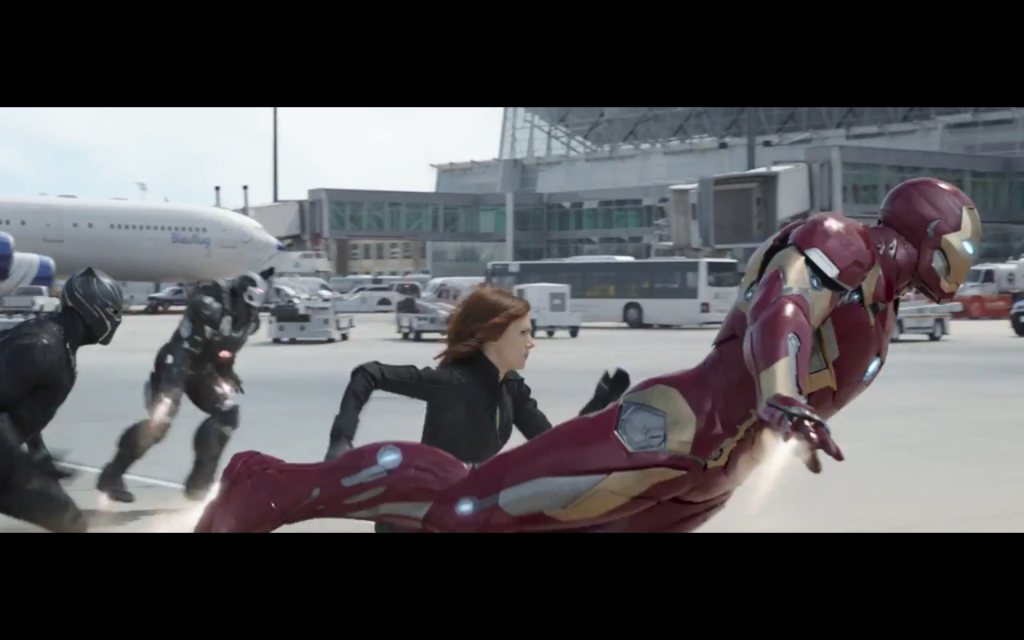 With the subtitle being “Civil War,” the movie succeeds or fails based on how well-conceived and executed the politics are. It would be easy to paint the civil war as most civil wars are with one group oppressing another and that resulting in rebellion, which is essentially what happens here. However, the most intriguing, civil wars are ones where one has two equally matched sides with a legitimate difference of opinion over a fundamental issue or problem that goes to each side’s core values or beliefs where things escalate to the point of each side digging in their heels, pitting friends or brothers and sisters against one another.

That’s what this movie does. It brilliantly and methodically unfolds a most intriguing, civil war in the manner just described. It achieves the opposite of what Joss Whedon’s The Avengers (2012) sought to do. Instead of bringing these amazing heroes together, it drives them apart. Ironically, my favorite moments in The Avengers, the first film that had most of these characters interacting, were the moments when the heroes were at odds with themselves. Whedon laid down a lot of the groundwork here. The Russo brothers, along with Emmy-winning writers Christopher Markus and Stephen McFeely, merely expand on it satisfyingly. 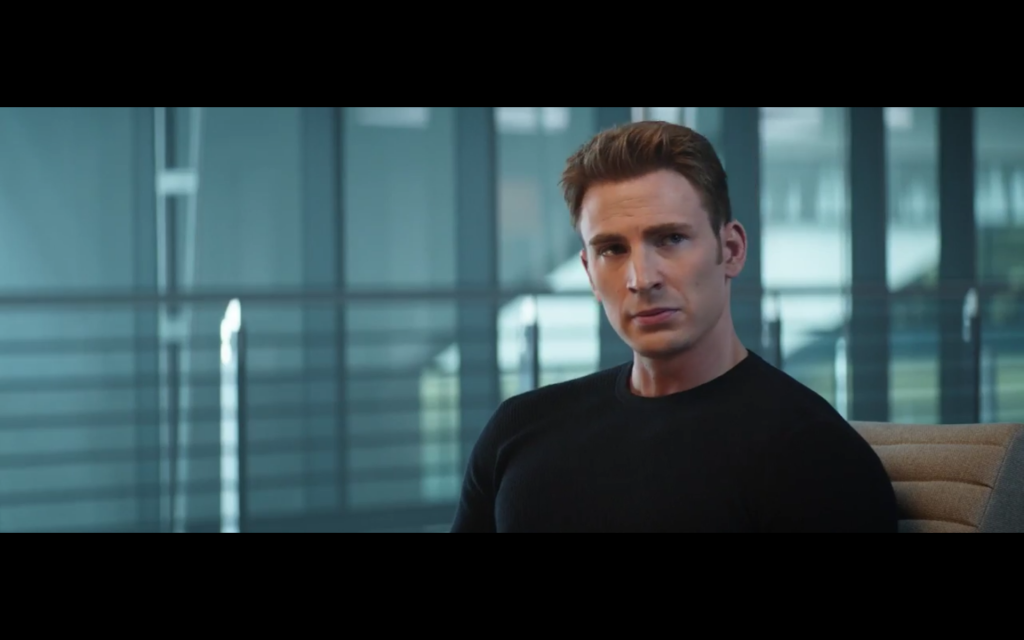 Chris Evans (pictured above), reprising his role for the fifth time, stars as Steve Rogers aka Captain America, a World War II veteran who became the subject of an experiment by Howard Stark that gave Steve super strength and an invincible, circular shield. He is the leader of a group of super heroes and well-trained spies and agents. The group is called the Avengers. 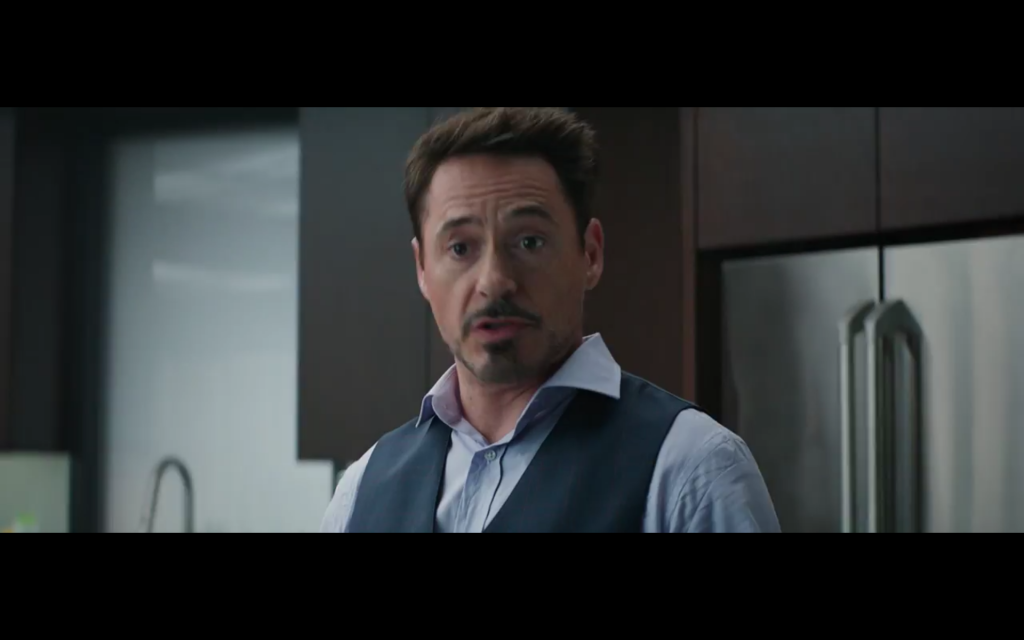 Robert Downey, Jr. (pictured above) co-stars as Tony Stark aka Iron Man, a highly-intelligent inventor and scientist, as well as a playboy billionaire who has developed all kinds of weapons and robotic technology that includes a mechanical suit that he wears that gives him super strength, flight and the ability to fire lasers. He’s one of the founding members of the Avengers and since the loss of government support, his company is also the one funding the Avengers’ mission and living space.

Tony has a lot of power and influence, but it’s Steve who leads and effectively guides the team on missions. The problem is that the Avengers work independently of any nation including the United States. They go into any sovereign country to do whatever they have to do. Their goal is to stop terrorists, enemies of state or greater, global threats, but almost every mission comes with collateral damage. Often, innocent lives are lost.

The U.S. Secretary of State, played by William Hurt, approaches the Avengers with the Sokovia Accords, which is a treaty signed by 117 countries around the world, so practically all, that wants to put the Avengers back under government control, specifically the United Nations. Tony agrees with the Accords because as the face and veritable spokesman for the Avengers he gets the brunt of the blame for all the civilian deaths. Tony is racked with guilt. However, Steve doesn’t agree with the Accords because despite being Captain America, he’s actually the least trusting of any government, including the U.S. government. 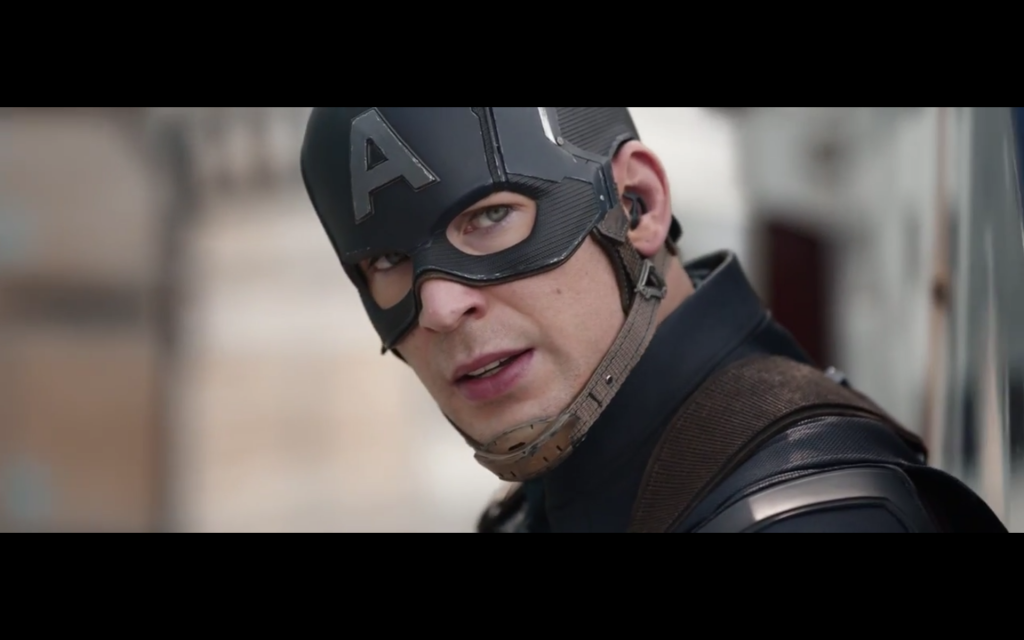 To put it in simpler terms, Tony is a Democrat and Steve is a Republican. Iron Man is a liberal and Captain America is a conservative. Tony wants more government regulations and oversight. Steve wants less. Steve is all about preserving his freedom to do whatever he sees fit and not be overruled by a government that might be corrupt or have conflicting agendas.

Now, this split between Steve and Tony forms the backbone of this movie’s rivalry that escalates and gets deeper and more personal. Yet, it’s not as simple as saying Steve is right-wing and Tony is left-wing. As the movie goes on, we see there are certain things where Steve is liberal and certain things where Tony is conservative.

For example, Tony is more of a hawk and is tougher on crime, whereas Steve believes in reform and giving criminals second chances, even ones who have committed horrible crimes. Such is the case for Steve’s former friend-turned-assassin, Bucky Barnes aka the Winter Soldier, played by Sebastian Stan (pictured below). 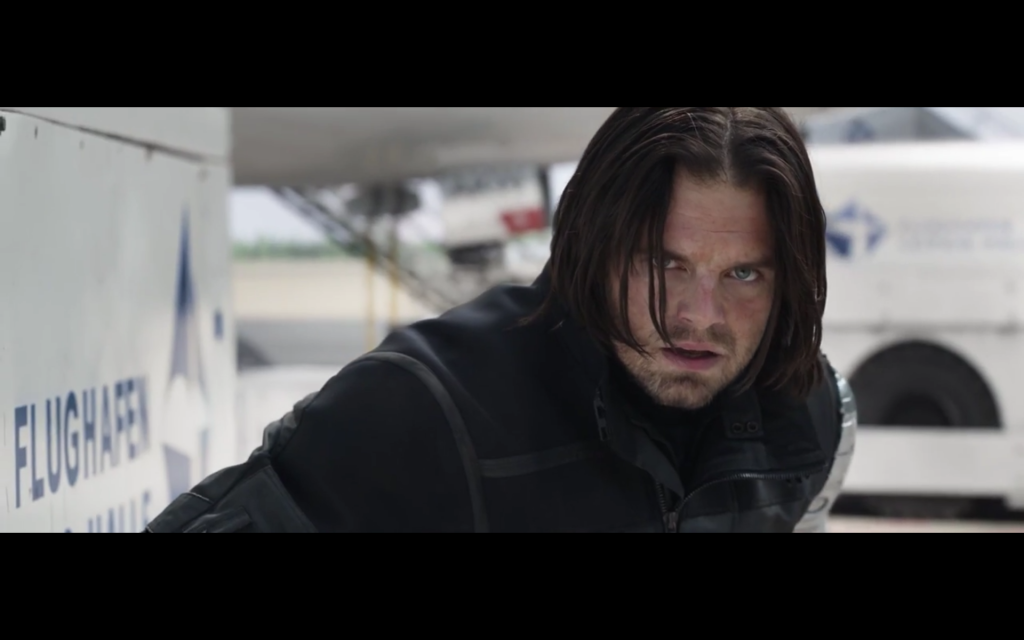 The movie does an excellent job of not telling you, which side is right, or which side for whom we should root. Because Captain America is the titular character, it arguably leans a certain way, but up until the end, the movie keeps things fairly balanced.

For me, and probably for others, I went back and forth. I’ve never really enjoyed Tony as a character independent of the Avengers. My preference has always been toward Steve, but this film’s end, my allegiance shifted because Tony is given probably the best, singular, emotional moments in any comic book film, or one that immediately jumps into top three, but even before then, politically Tony’s argument and position is the most logical and veers away from Steve’s unilateral vision.

All the supporting characters and actors portraying them range from superb to phenomenal. Even the resident new character shines better than the resident new character in Batman V Superman who was Wonder Woman. Here, we get T’Challa aka Black Panther, played by Chadwick Boseman. He has a regal nature and stature that commands the screen. We also get a rebooted, Peter Parker aka Spider-Man, played by Tom Holland. The heart and humor that comes with that character is so monumental and refreshing on top of everything here that is monumental and refreshing. 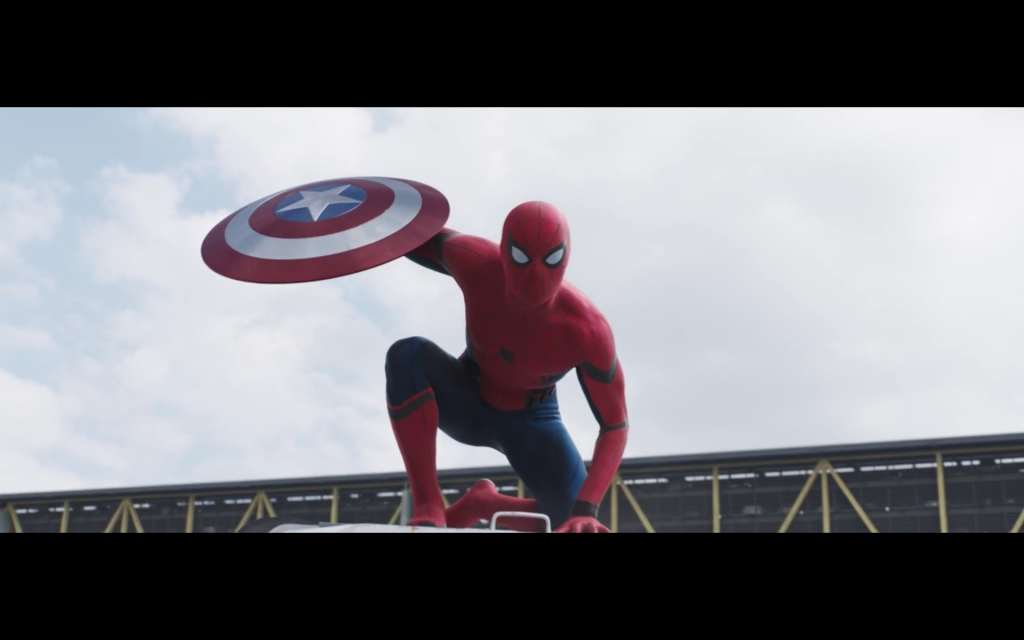 It’s not all laughs and fun fights. The movie does properly integrate themes about grief and revenge. Parents lose their children and children lose their parents. How people deal with those kinds of losses also form an emotional backbone to this movie that is very strong.

Five Stars out of Five.
Rated PG-13 for extended scenes of violence, action and mayhem.
Running Time: 2 hrs. and 27 mins. 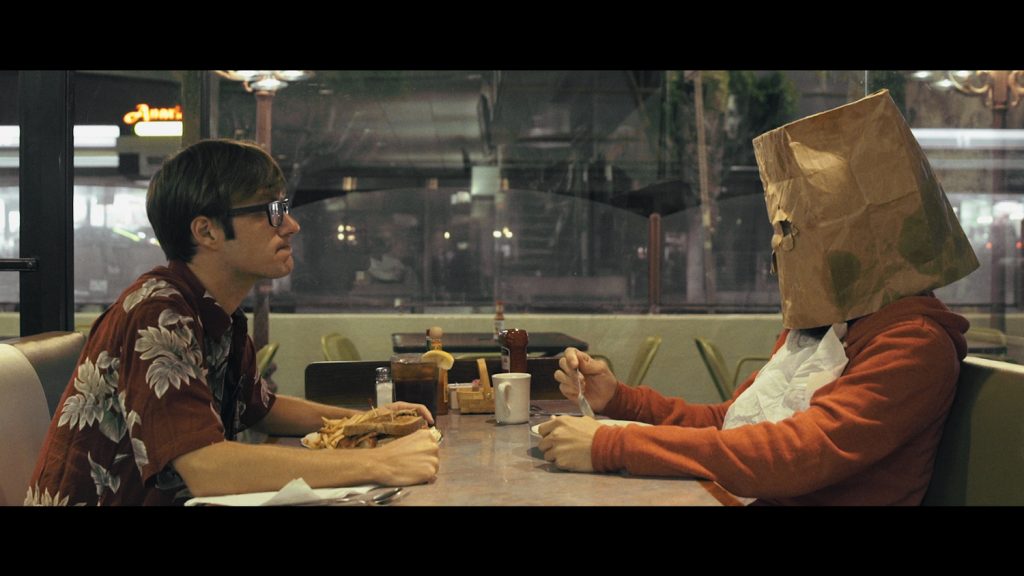 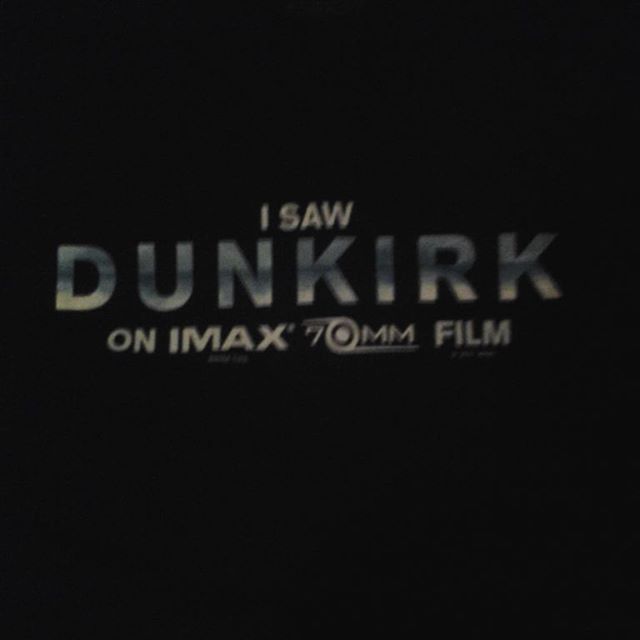 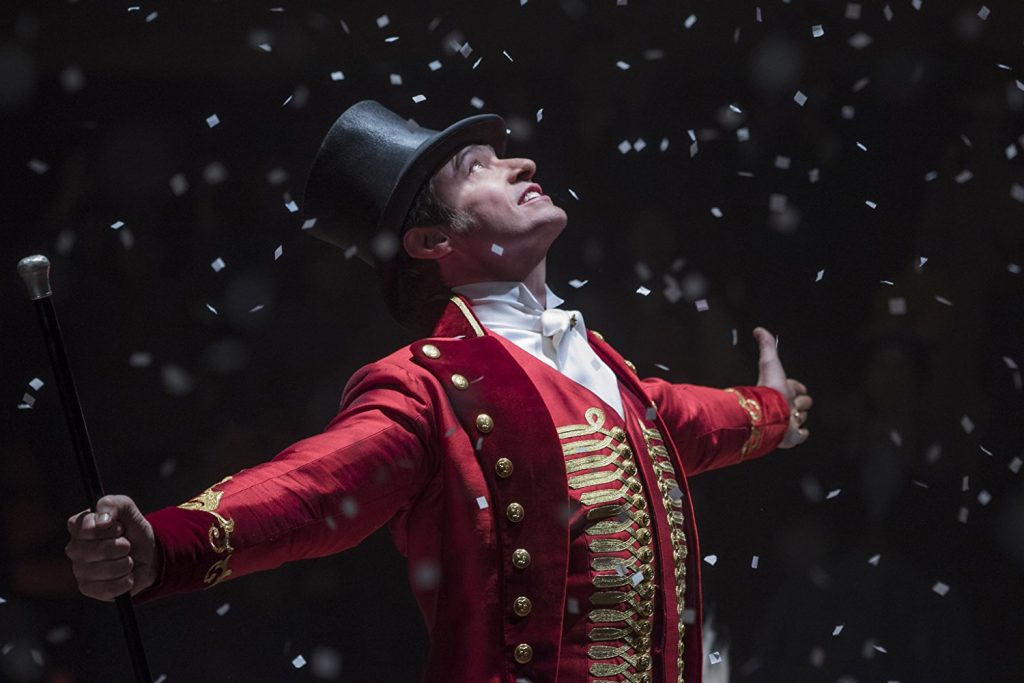