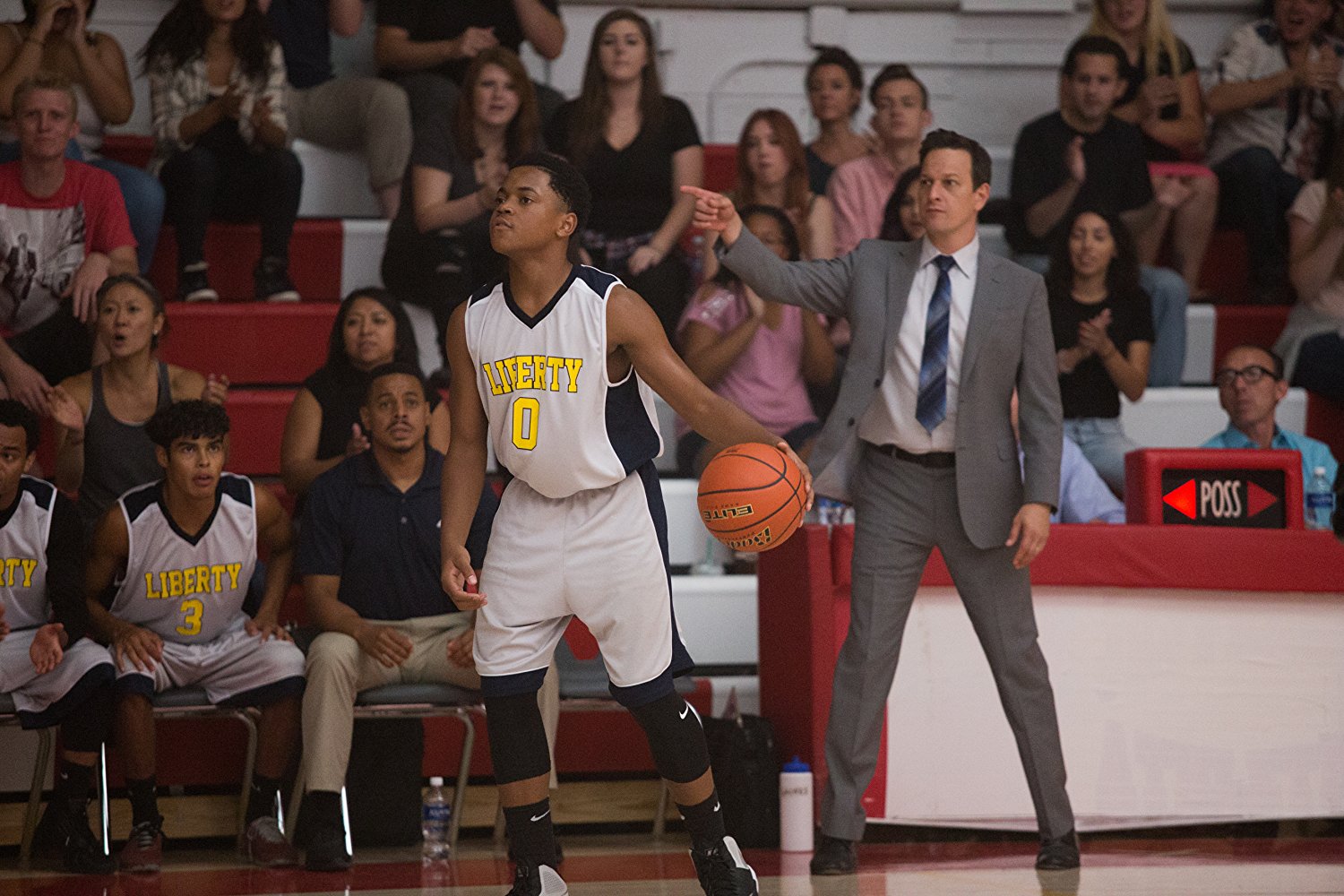 It was reported in the news that the FBI has been investigating corruption within college basketball in regard to recruiting violations. In April of this year, federal prosecutors filed an indictment including student-athletes linked to North Carolina State University and the University of Kansas. The FBI’s investigation explores how people are potentially breaking the NCAA’s amateurism rules. Several cases have challenged the rules to change them, but, as it stands, the rules limit the money that can go to student-athletes in whatever fashion or whatever reason, aside from providing for an education. This movie, written and directed by Ryan Koo, touches upon this breaking of the amateurism rules, as well as the challenging of the rules.

This subject matter has been to screen before in William Friedkin’s Blue Chips (1994). It was also explored in NBC’s Friday Night Lights (2006). Other than the NCAA amateurism scandal, this movie isn’t that much different from several films about a young African-American boy who aspires to play professional basketball. From Hoop Dreams (1994) to Coach Carter (2005), we’ve seen various films tackle the subject. Koo’s movie takes a slightly different route into the fray, which sets it apart somewhat. It’s not totally unique in that it follows a recent documentary that exposes the issue more comprehensively. Mike Nicoll’s At All Costs (2016) delves into the process if not the controversies around the Amateur Athletic Union or AAU.

It’s almost as if Koo saw Nicoll’s movie and decided to adapt it into a narrative form with actors. However, Koo is actually adapting this feature from a short film of the same name he did in 2013, starring Curtiss Cook Jr. (Naz & Maalik and Gook), an amazing young actor but older than even the main kid here. The exploitation of students who are 18 or older is egregious but Koo underlines the point by focusing on students who are under the age of 18 or at least one student who’s that young. Koo’s original short had the student-athlete not be as exploited as much as he was doing the exploiting. His protagonist here is the opposite. The protagonist here is way more naïve and innocent.

Michael Rainey Jr. (Lee Daniels’ The Butler and Barbershop: The Next Cut) stars as Terron Forte, a 14-year-old black athlete who is attending Riverside High School. He’s the only child to a mother and father who are struggling. Terron also has a learning disability, one that’s similar to dyslexia. He’s not good at reading numbers. They seem backwards or like gibberish. He also has trouble with certain directions. However, he is a terrific basketball player, a clear stand-out in his school, a star that everyone knows, thanks in part to his constantly posting on social media.

Josh Charles (The Good Wife and Sports Night) co-stars as Coach Gaines, a family man who spends most of his life on the road. He’s similar to an AAU coach. He works for a prep school called Liberty Prep. He recruits students to the school’s basketball team and pushes them to certain NCAA divisions or places. He doesn’t have a glamorous life. He approaches Terron in a well-dressed demeanor, but he’s not in this for the money. He wants to make the best ball players as he can, which unfortunately comes at the sacrifice of education. He also knows that money is a huge part of everything that goes on behind-the-scenes, so he has to walk a fine line, which occasionally he crosses. 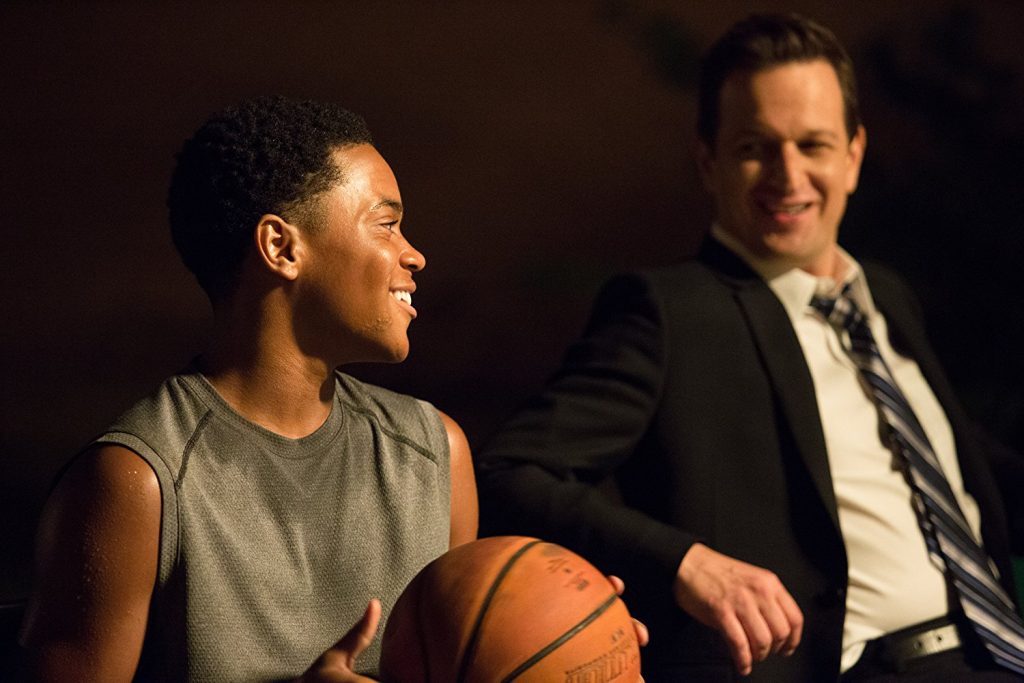 Brian White (The Cabin the Woods and The Game Plan) also co-stars as Vince Forte, the father to Terron who used to be a football player. He wanted to go pro, but he didn’t make it and now health problems have left him and his family further struggling. Mainly, he’s had difficulty finding and keeping a job. This has also put a serious strain on his relationship with both his wife and his son. However, he sees an opportunity for his son to do what he couldn’t. Vince is the one who connects his son to Coach Gaines.

Koo’s script doesn’t underscore the recruiting violations that occurred, the gifts and the monies that exchanged hands that made what happened illegal. By the end, Terron accuses Vince of selling him and that sentiment doesn’t hit as hard as it could have or should have. The documentary At All Costs makes more a point about the idea of branding and how shoe companies like Nike and Adidas are all over this whole thing. This movie brushes over branding and only mentions it in passing when Adidas, for example, is smack dab in the middle of the aforementioned, FBI investigation.

This movie doesn’t deal with physical injuries like Nicoll’s documentary does as well, but Koo does deal with the drama in a very good way. There are some missteps or places where he comes up short, but the essential relationship between Terron and Coach Gaines is one that’s handled well with some ups and downs. Koo also does a fairly good job of filming the basketball scenes. It helps that Rainey appears to be a good player himself, so Koo can do slow-motion shots where he doesn’t have to edit but let Rainey shine in his own prowess.

Koo’s movie does do Nicoll’s movie one better in that it does focus a little bit more on the question of education versus athletics. It’s more pronounced here because the main character does have a learning disability. However, there are guys around him without a disability who blow off doing their education and the film never really delves into the repercussions of that. Even the ending, while solving his athletic career brushes over his education too. 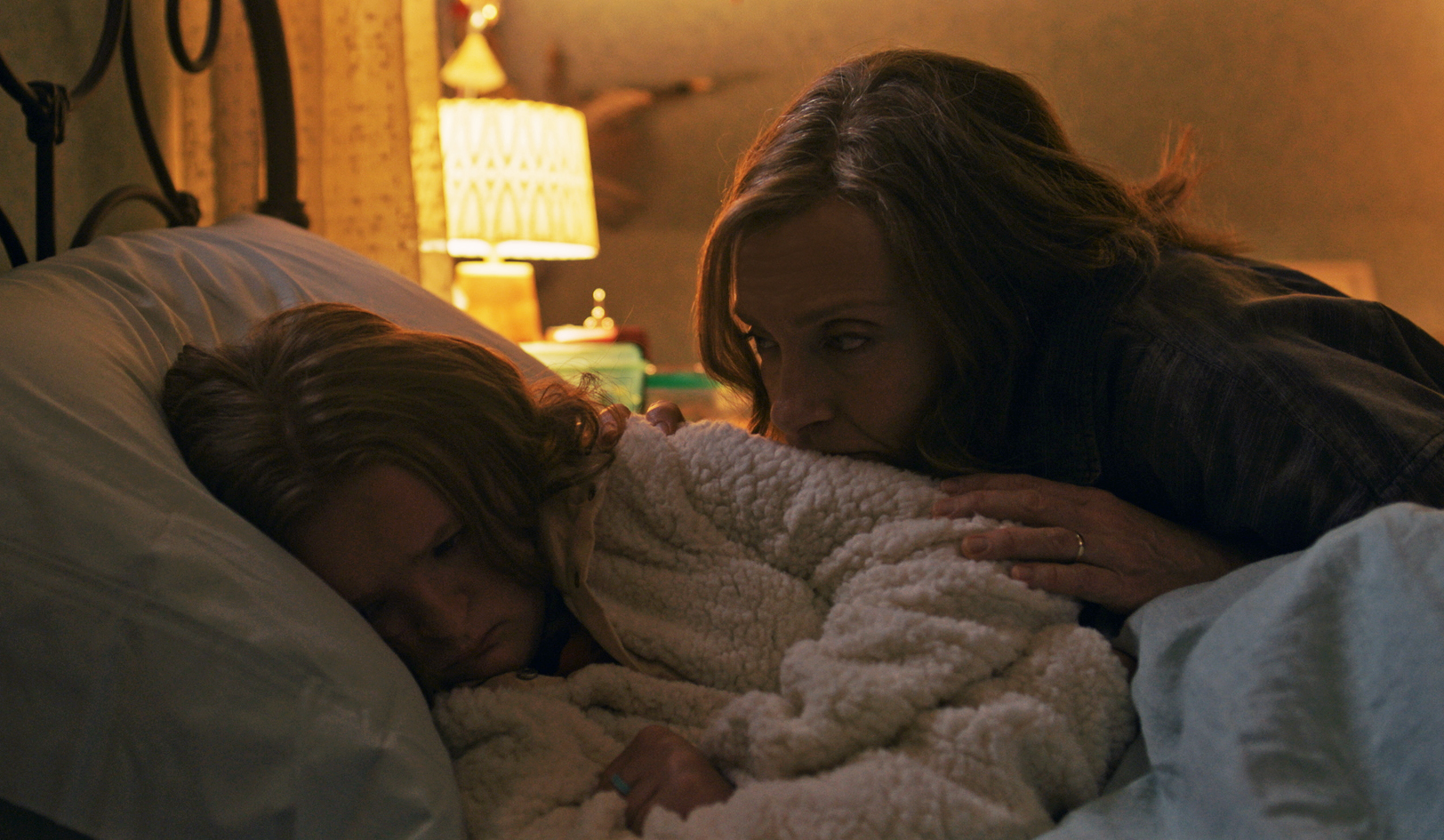 It’s a horror film ostensibly about a haunted house.[...] 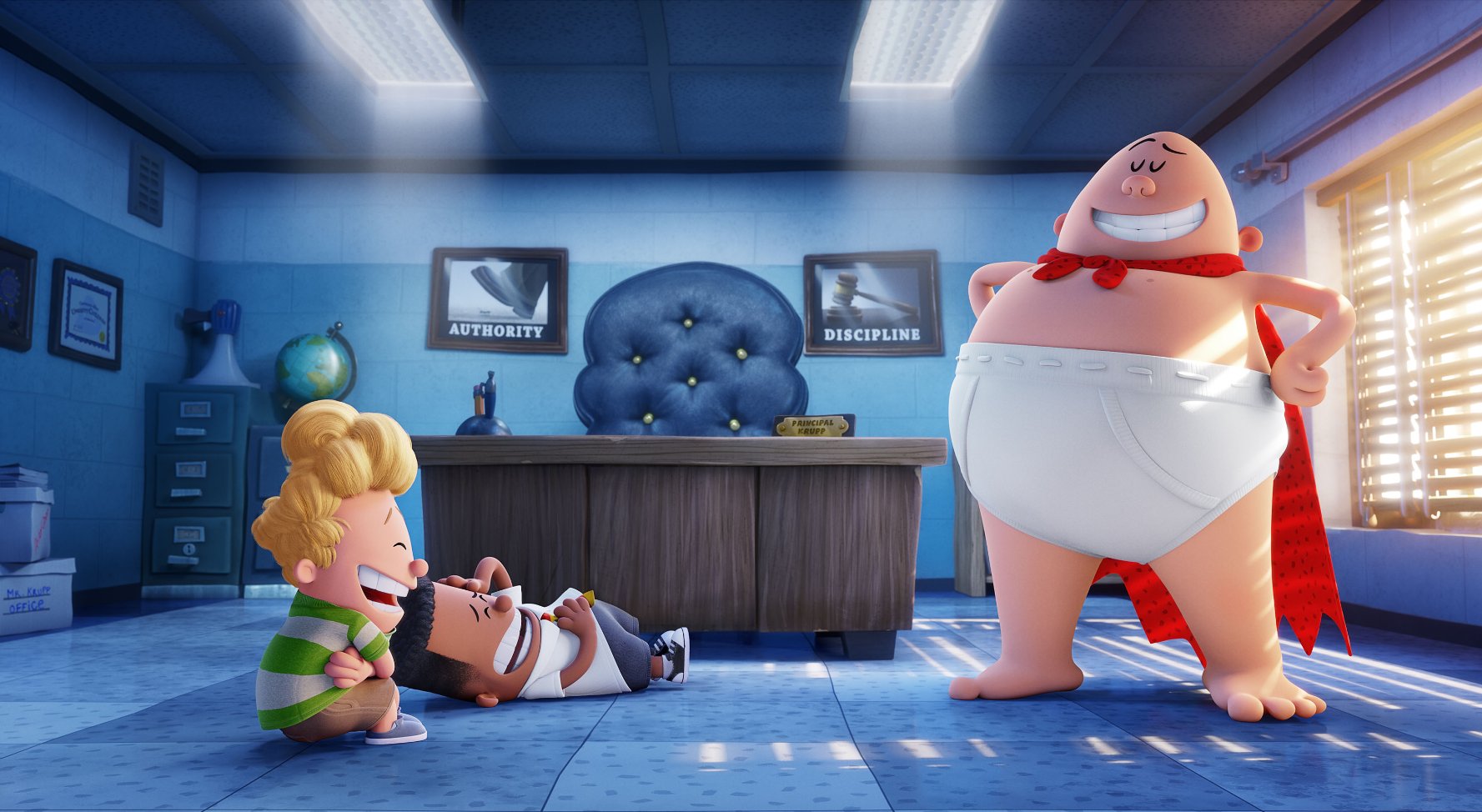 DreamWorks Animation has adapted the children’s novels by Dav[...] 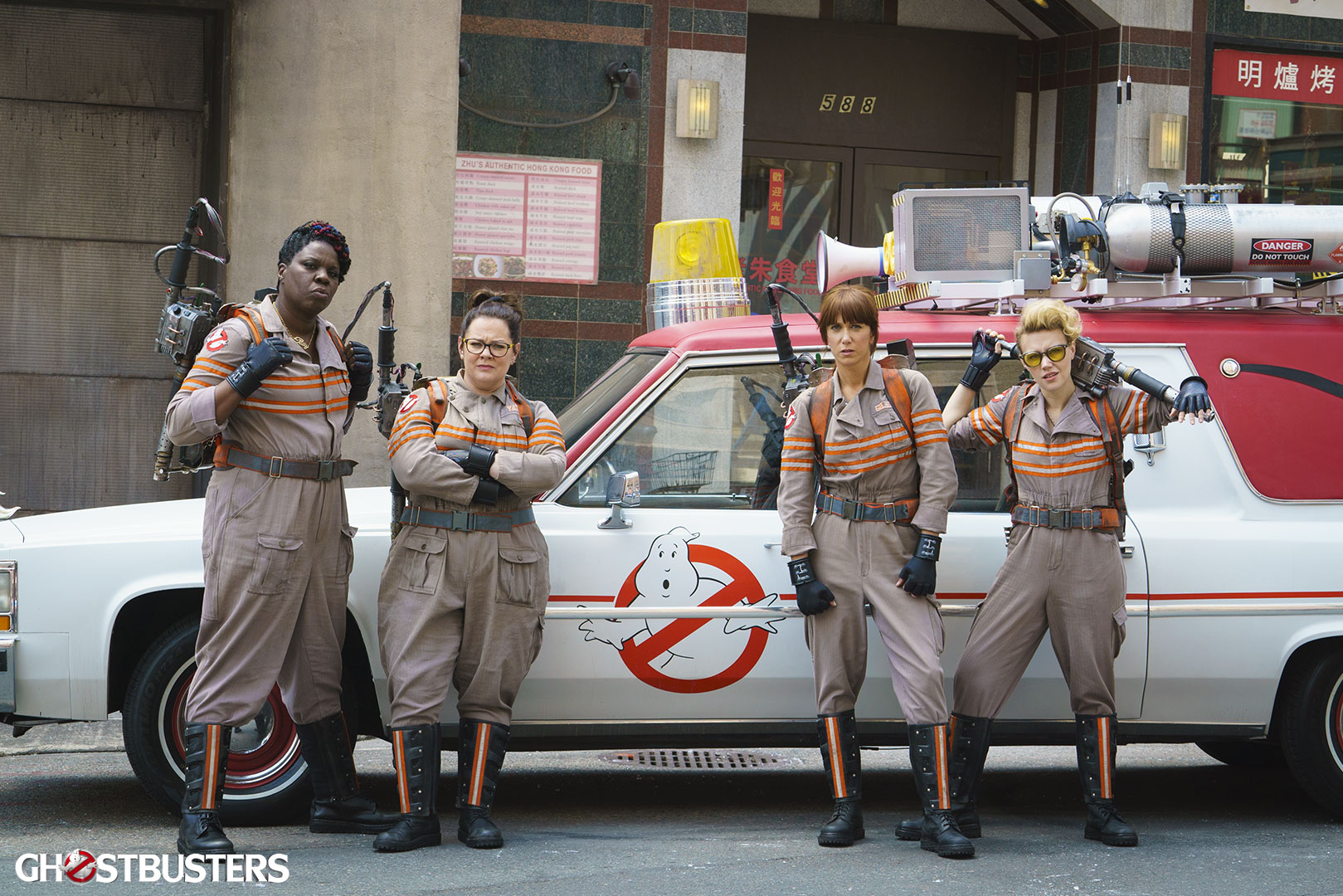 It’s become impossible to talk about this film without[...]