SALISBURY, Md.- More than a half billion chickens are grown by the Delmarva Poultry Industry every year. It is an industry that has a huge economic impact on the peninsula.  One of the biggest poultry companies in the country is Salisbury, Maryland-based Perdue Farms, a company that has prided itself on being a leader in innovation.

WBOC’s Steve Hammond  sat down this week with Perdue Farms Chairman Jim Perdue to talk about new things his  family-owned and operated company is doing to keep getting bigger and better. 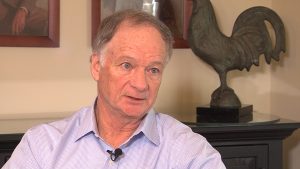 A corporate video from Perdue Farms features a chicken house with windows to let in natural sunlight.  It also has things to keep the birds moving, sort of like fitness equipment for chickens.

“We call them enrichments or things to play with.. bails of hay, perches, hide boxes,” Perdue said.

“And really the impetus for it was when we bought Coleman Organic, the largest organic chicken producer,” Perdue said. “We found that the meat seems to be superior and premium. It’s tender and it has a lot of positive qualities.” 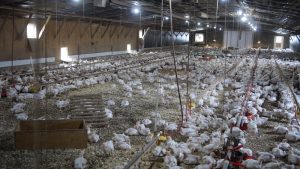 One of Perdue Farms’ newer chicken houses. It has windows to allow in natural light. It also has things to keep the birds moving, sort of like fitness equipment for chickens. (Photo credit: Perdue Farms)

Perdue Farms is looking to see if those positive qualities are the same for all of its chickens, not just organic, the company chairman said.

“Basically we measure the activity of the chickens,” Perdue said. “As Brewster Brown, our veterinarian will tell you, chickens do four things: they eat, drink sleep and mess around and so we want to increase the mess around part by two. We have committed to converting 200 chicken houses and we’re just about complete, and measuring the performance of the chickens window versus no sidewall windows.” 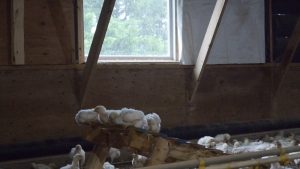 Chickens in these new Perdue Farms chicken houses are given “enrichments,” as Jim Perdue calls them, such perches, bails of hay and hide boxes. (Photo credit: Perdue Farms)

At the same time Perdue Farms is experimenting with different types of chickens, according to Perdue.

“We’re looking at heritage breeds … like a brown-feathered bird,” he said. “They’re much more active. In fact, they’re into the ceiling. I mean we’ve had a couple of trials and so they’re very very active but we have to find out [efficiency] ..or how much do you lose efficiency with these birds because they do grow slower.  The feed conversion may not be as good, so what is the cost implication of that.”

This research can take years. Several years Perdue Farms introduced its “no antibiotic ever” program to consumers. Perdue said when his company’s team of experts started working on it, in-house they called it the “Wheaties Program.”

“Basically we called it Wheaties because consumers will let us do to their chickens what they will do to their kids,” Perdue said. “And an example here is if your child gets an ear infection, they get amoxicillin for three days prescribed by a doctor. But they don’t put it in their cereal every morning, hence Wheaties, which is what we were doing 10-15 years ago and what the industry still does, is puts antibiotics in the feed everyday.”

Not anymore at Perdue Farms. Now antibiotics are replaced by natural antioxidants, including herbs like thyme and oregano.

“For example there’s a parasite in chickens called coccidiosis,” Perdue said. “These herbs have a beneficial effect as in antioxidants.” 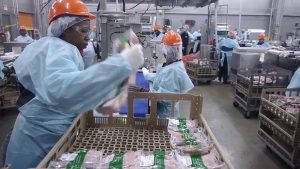 Perdue said his company is trying to build a better tasting chicken for the right price, but a lot of it hinges on what the consumer wants.

“The next big thing will be what the consumer tells us is important,” Perdue said.

The company is hearing a lot about non-genetically modified products, gluten-free, environmentally-friendly and farm sustainability, according to Perdue.

“Certainly anytime you can be more convenient for the consumer, like shortcuts and perfect portions which solves a problem for them, they will jump on a product that saves them time and solves the biggest problem of the, ‘What are we gonna have for dinner?'”

Steve Hammond is one of the veterans of the WBOC newsroom. He has covered some of the biggest stories across the peninsula and around the world. Over the years, he has traveled overseas, telling the stories of our local troops in harm's way in Iraq and in Somalia. Steve's reporting has earned him many awards including a prestigious national Edward R. Murrow Award. In addition, he's received numerous honors from the Associated Press and the Radio Television News Directors Association. "Earning the respect of colleagues in the business is nice, but it's not nearly as important as earning AND keeping the trust and respect of our viewers," he said. In addition to anchoring newscasts and helping to manage the newsroom, Steve leads WBOC's political coverage. He has moderated gubernatorial and congressional debates, interviewed presidential hopefuls, and kept track of countless races in Delaware, Maryland and Virginia. Steve grew up in Baltimore and graduated from the University of Delaware. He frequently gets asked what he likes about his job. "I have one of the best jobs around. It's very unpredictable. Stealing a line from Jimmy Buffet, '...some of it's magic and some of it's tragic...' I never know what's going to happen on any given day. I'm always learning something new and sharing it with thousands of people. I've had some fantastic experiences, like flying with the Blue Angels or interviewing George W. Bush. I wouldn't trade it for the world." Steve lives near Fenwick Island, Del. with his wife Heather and sons, Graham and Hunter. He is a member of Trinity United Methodist Church in Salisbury, Md. Steve also serves as a member of the Board of Trustees for Worcester Preparatory School in Berlin, Md. He has also been active in many charitable organizations, including The Salvation Army, Junior Achievement, March of Dimes, Easter Seals and Big Brothers/Big Sisters. 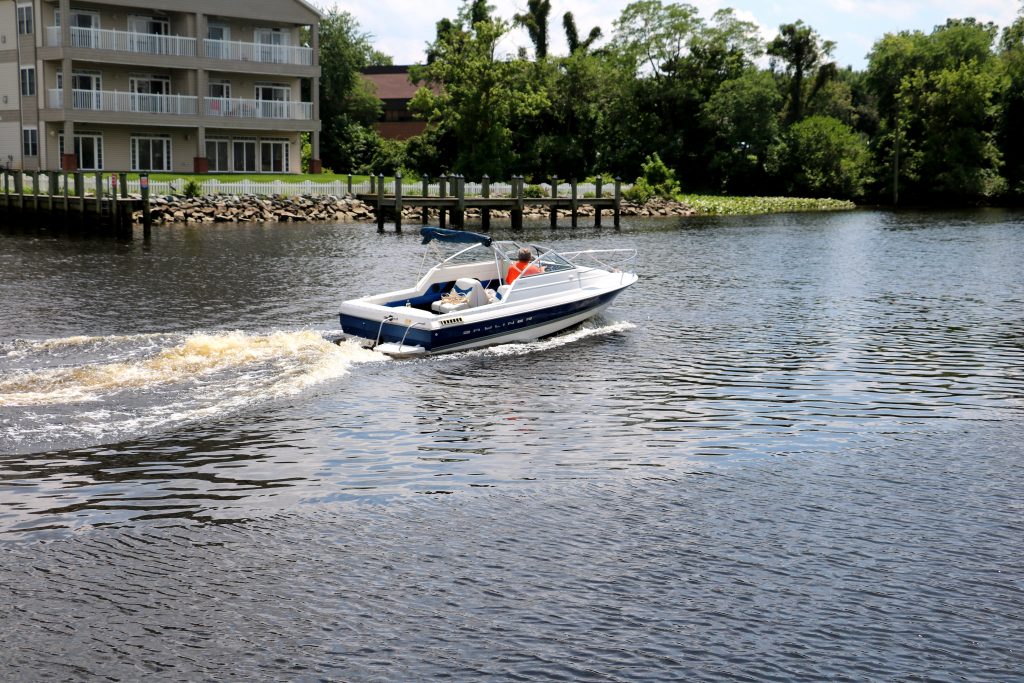 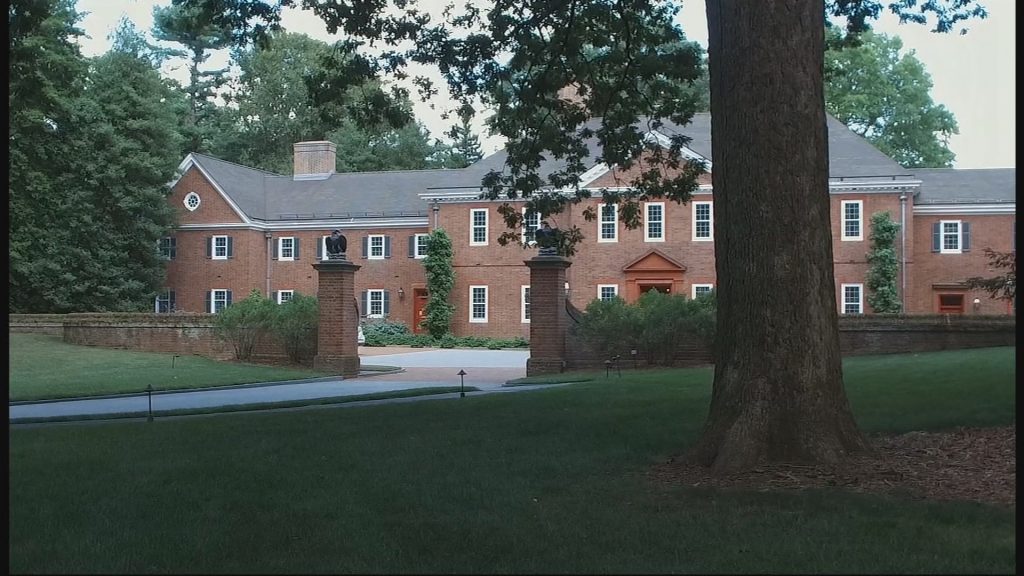 The Mt. Cuba Center is a botanic garden in[...] 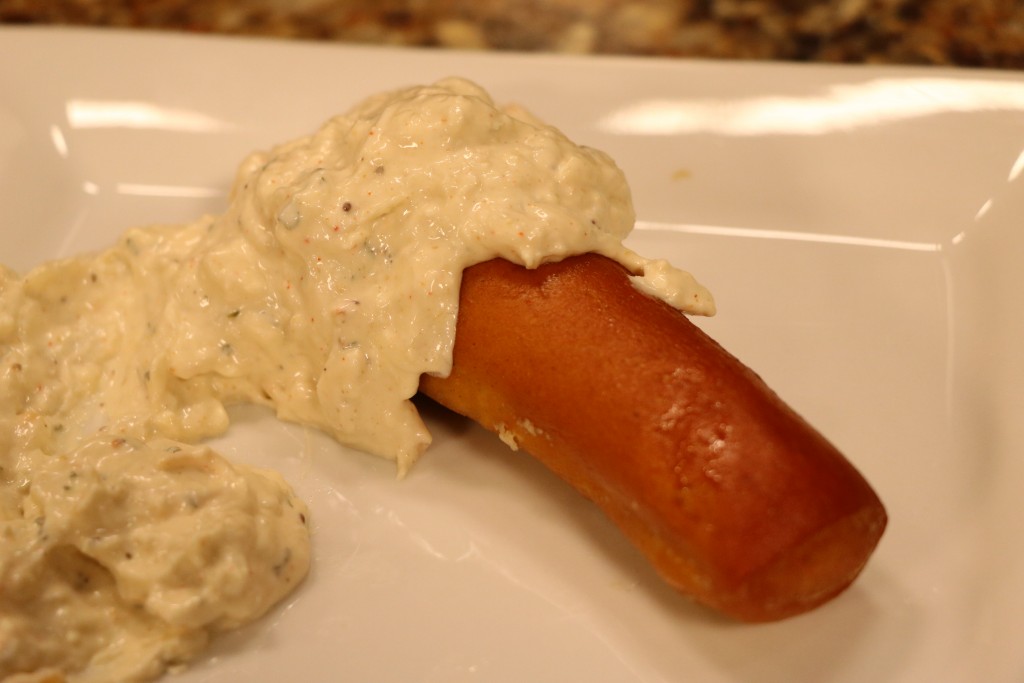 We're celebrating National Pretzel Day so we are in the kitchen[...]