We’ve been following K-9 Brune from the Wicomico County Sheriff’s Office since the beginning of his career here on Delmarva almost two years ago.

K-9 Brune was named in memory of John Brune, a member of the Wicomico County Sheriff’s Office who passed away a few years ago. Shortly after John’s death, his family started the “John Brune Law Enforcement K-9 Foundation,” and K-9 Brune was purchased as a puppy. 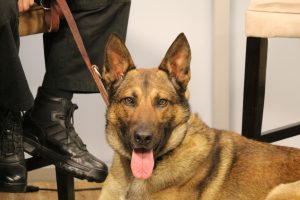 “There is not a single day Brune does not go out on patrol that he does not sniff out drugs and other illegal narcotics here in Wicomico County,” Sheriff Lewis says. “He is also used Sussex County Delaware and other locations that we frequently get called upon to assist law enforcement. This dog has far exceeded our expectations.”

D.F.C. Seichepine says that Brune learns something new everyday and when asked about John and Brune’s relationship, John gives a heartwarming answer.

“He’s my best friend – no doubt about it,”  D.F.C. Seichepine says. “He’s my partner and my best friend and I hope to have him for a very long time.”

There are seven K-9’s at the Wicomico County Sheriff’s Office. Sheriff Lewis says police K-9’s are so important.

“Every single day we track robbery suspects, burglary suspects, lost elderly individuals, lost children, and we scan many residences, vehicles, and businesses for drugs,” Sheriff Lewis says. “These dogs are cross-trained to detect many different things, including heroin. There is rarely a day that goes by when Brune’s on patrol that he does not find heroin hidden somewhere here in Wicomico County.”

The 3rd Annual John Brune Law Enforcement K-9 Foundation Fundraiser will raise money for bullet resistant vests for the dogs and pop-locks for K-9 unit police cars. The event is Saturday, March 25 at Sisters in Berlin, Md. from 6 pm-8 pm. Learn more about the event here.

Delaware's 2016 National Distinguished Principal of the Year, Jenny Nauman and her family with Sean and Lisa

Today on DelmarvaLife: Delaware’s 2016 National Distinguished Principal of the[...]